On October 3rd, after a resolution from both houses of the Congress, President George Washington proclaimed that Thursday, November 26th, 1789, would be a day of “public thanksgiving and prayer”. This was his proclamation:

By the President of the United States of America, a Proclamation.

Whereas it is the duty of all Nations to acknowledge the providence of Almighty God, to obey his will, to be grateful for his benefits, and humbly to implore his protection and favor-- and whereas both Houses of Congress have by their joint Committee requested me to recommend to the People of the United States a day of public thanksgiving and prayer to be observed by acknowledging with grateful hearts the many signal favors of Almighty God especially by affording them an opportunity peaceably to establish a form of government for their safety and happiness.

Now therefore I do recommend and assign Thursday the 26th day of November next to be devoted by the People of these States to the service of that great and glorious Being, who is the beneficent Author of all the good that was, that is, or that will be-- That we may then all unite in rendering unto him our sincere and humble thanks--for his kind care and protection of the People of this Country previous to their becoming a Nation--for the signal and manifold mercies, and the favorable interpositions of his Providence which we experienced in the course and conclusion of the late war--for the great degree of tranquility, union, and plenty, which we have since enjoyed--for the peaceable and rational manner, in which we have been enabled to establish constitutions of government for our safety and happiness, and particularly the national One now lately instituted--for the civil and religious liberty with which we are blessed; and the means we have of acquiring and diffusing useful knowledge; and in general for all the great and various favors which he hath been pleased to confer upon us.

And also that we may then unite in most humbly offering our prayers and supplications to the great Lord and Ruler of Nations and beseech him to pardon our national and other transgressions-- to enable us all, whether in public or private stations, to perform our several and relative duties properly and punctually--to render our national government a blessing to all the people, by constantly being a Government of wise, just, and constitutional laws, discreetly and faithfully executed and obeyed--to protect and guide all Sovereigns and Nations (especially such as have shewn kindness unto us) and to bless them with good government, peace, and concord--To promote the knowledge and practice of true religion and virtue, and the increase of science among them and us--and generally to grant unto all Mankind such a degree of temporal prosperity as he alone knows to be best.

Given under my hand at the City of New York the third day of October in the year of our Lord 1789. 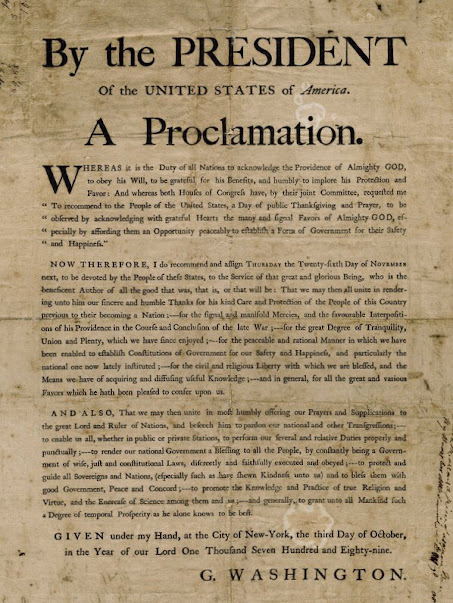 It is the Soldier


It is the Soldier, not the minister
Who has given us freedom of religion.

It is the Soldier, not the reporter
Who has given us freedom of the press.

It is the Soldier, not the poet
Who has given us freedom of speech.

It is the Soldier, not the campus organizer
Who has given us freedom to protest.

It is the Soldier, not the lawyer
Who has given us the right to a fair trial.

It is the Soldier, not the politician
Who has given us the right to vote.

It is the Soldier who salutes the flag,
Who serves beneath the flag,
And whose coffin is draped by the flag,
Who allows the protester to burn the flag.
Posted by Barry at 11:11:00 AM No comments:

This year's Veteran's Day is a first for me as this is my first one in 12-years where I am not a member of the military. Today is going to be a busy day for me, but I'd like to take a moment and thank all my Brothers and Sisters in the Armed Forces. God bless you all! 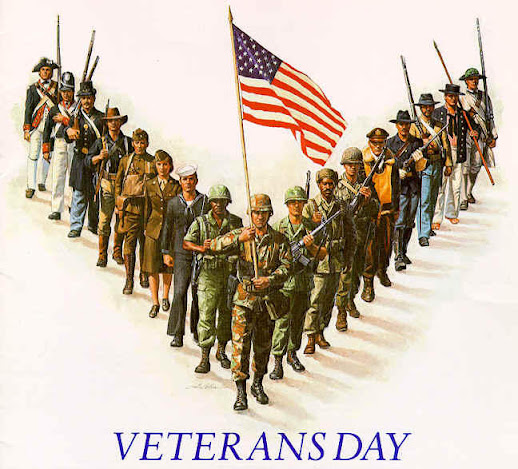 They're traced in lines on the Parthenon,
Inscribed by the subtle Greek;
And Roman legions have carved them on
Walls, roads and arch antique;
Long ere the Goth, with vandal hand,
Gave scope to his envy dark,
The Mason craft in many a land
Has graven its Mason mark.

The obelisk old and the pyramids,
Around which a mystery clings,-
The Hieroglyphs on the coffin lids
Of weird Egyptian kings,

Syria, Carthage and Pompeii,
Buried and strewn and stark,
Have marble records that will not die,
Their primitive Mason mark.

Upon column and frieze and capital,
In the eye of the chaste volute, -
On Scotia's curve, or an astrogal,
Or in triglyp's channel acute,-
Cut somewhere on the entablature,
And oft, like a sudden spark,
Flashing a light on a date obscure,
Shines many a Mason mark.

These craftsmen old had a genial whim,
That nothing could ever destroy,
With a love of their art that naught could dim,
They toiled with a chronic joy;
Nothing was too complex to essay,
In aught they dashed to embark;
They triumphed on many an Appian Way,
Where they'd left their Mason mark.

Crossing the Alps like Hannibal,
Or skirting the Pyranees,
On peak and plain, in crypt and cell,
On foot or on bandaged knees; -
From Tiber to Danube, from Rhine to Seine,
They needed no "letters of marque;" -
Their art was their passport in France and Spain,
And in Britain their Mason mark.

The monolith gray and Druid chair,
The pillars and towers of Gael,
In Ogharn occult their age they bear,
That time can only reveal.
Live on, old monuments of the past,
Our beacons through ages dark!
In primal majesty still you'll last,
Endeared by each Mason mark.
Posted by Barry at 7:00:00 AM No comments: