This weekend and last weekend I spent traveling to the Grand York Rite of Colorado and Grand York Rite of Wyoming. The Grand York Rite of Colorado chose to hold their business meetings virtually and then they held a one-day session where they conferred the Order of High Priesthood and the Knights of the York Cross of Honor afterward they installed the officers for each of the three bodies. It was a pleasure to attend and they did one of the best jobs at conferring the Order of High Priesthood that I've ever seen. I had the pleasure of assisting the outgoing Grand High Priest in presenting awards as well as presenting him with his lifetime membership in the General Grand Chapter of Royal Arch Masons International.

This weekend was spent in Cheyenne with the Grand York Rite of Wyoming. Wyoming is like a second home and I enjoyed the hospitality. The Most Excellent Grand High Priest (who is also the Imperial Outer Guard for Shriners International) ran a very efficient meeting. During my comments, I called upon another Companion and we invested a very worthy Past Grand High Priest with the Ephraim A. Kirby Award. At the end of the first day, I helped cook dinner for the Pancake and Steak Dinner and was made a member of the Black Horse Troop. During the second day, I also attended the Grand Council of Cryptic Masons of Wyoming and the Grand Commandery of Knights Templar of Wyoming. At the Wyoming Banquet, I presented several awards to include presenting the outgoing Grand High Priest with his lifetime membership in the General Grand Chapter.

On both weekends, I traveled with my best friend and who is also the Northwest Department Commander (my counterpart in the Grand Encampment). He and I have a 2-year overlap in our duties as regional deputies for our respective body of the York Rite. Now to get home and get ready for next weekend's Masonic activities. 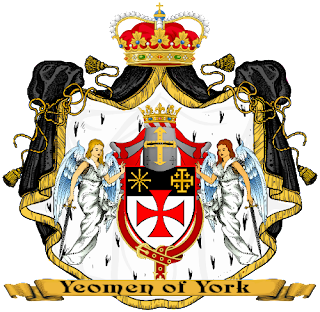 Anyone familiar with the American York Rite knows there are many honorary and invitational appendant bodies. A relatively new honorary body is called "Yeomen of York." The purpose of this order is "to promote York Rite Masonry, including the Symbolic Lodge."

This order was first established in Merrillville, IN, around 1993 by seven York Rite Masons. This order is by-invitation-only by a current member and eligibility for membership is predicated on active membership in all York Rite bodies, but to be an officer, one must have been initiated as a Knight of the York Cross of Honor.

The basic organizational unit is known as a Preceptory. From what I can find, there are Preceptories in Indiana, Illinois, Minnesota, and Missouri. Members are distinguished by a black beret, with a combined York Rite bodies patch. Preceptories are composed of the following officers:

Preceptories fall under the governance of a Grand Preceptory which is composed of the following officers:

Yeomen were traditionally servants associated with noble households and the military. Around the Hundred Years' War, you started seeing "yeoman archers" in the armies as well as the navies. By the 17th century, "yeoman" became a rank for the seamen who were in charge of the ship's storage. The derivation of "yeoman" is uncertain, but, in my opinion, it is clearly of a Nordic/Scandinavian origin. It is agreed that yeoman is a combination of "yeo" and "man". The root of "yeo" is heavily debated. Some believe it "youngman" or "youngerman" which is considered to be synonymous with "lesser thegn", a social status in old England. Their use of the term "yeoman" though is very appropriate as this group is for members who are faithful servants to the Craft.