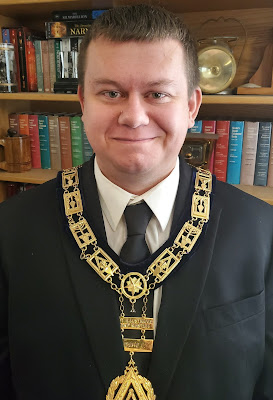 I started this blog in 2010 to share the research that I have been doing since before joining Freemasonry. The passing and sharing of knowledge are paramount to the continuance of Freemasonry and society. "A people without the knowledge of their past history, origin and culture is like a tree without roots." (Marcus Garvey)

This blog also serves as a chronicle of my journey through Freemasonry. I have been involved in Freemasonry for over 14-years now. I'm a Past Master of Oriental Lodge No. 60, the Idaho Lodge of Research No. 1965 (and Past Secretary), and the Idaho City Historical Lodge No. 1863; Past Grand Orator, former Chairman of the Masonic Research and Education Committee, and former Chairman of the Board of Relief for the Grand Lodge of Ancient Free & Accepted Masons of Idaho; Past High Priest of Boise Chapter No. 3, Royal Arch Masons; a Most Excellent Past Grand High Priest of the Grand Chapter of Royal Arch Masons of Idaho; Deputy General Grand High Priest for the Northwest of the General Grand Chapter of Royal Arch Masons International; Past President of the Order of the High Priesthood of Idaho; Past Illustrious Master for Idaho Council No. 1, Cryptic Masons; Most Illustrious Grand Master of the Grand Council of Cryptic Masons of Idaho; Past Thrice Illustrious Master of the Order of the Silver Trowel in Idaho; Past Eminent Commander for Idaho Commandery No. 1, Knights Templar; recipient of the Knights Templar Cross of Honor (2015) and Knight Commander of the Temple (2019); Eminent Grand Senior Warden of the Grand Commandery of Knights Templar of Idaho; member of the Committee on Social Media for the Grand Encampment of Knights Templar of the USA; Marshal of the Idaho Chapter of the Sovereign Order of Knights Preceptor; Past Governor of Tri-Valley College No. 178, York Rite Sovereign College of North America; lifetime member of the Ohio Asylum of Research under the Grand Commandery of Ohio; Past Patron of Adah Chapter No. 8 of the Order of the Eastern Star of Idaho; a 32° in Boise Valley of the Ancient & Accepted Scottish Rite, Southern Jurisdiction of the USA; Fellow of the Grand College of Rites, USA; Senior General of St. Michael's Conclave of the Red Cross of Constantine; Past Associate Bethel Guardian of Bethel No. 29, Job's Daughters International; Junior Knight of Knights of Tara Council No.122, Order of Knight Masons; Marshal of Intermountain Chapel No. 27 and Provincial Grand Herald (Northwest Province) of Ye Commemorative Order of St. Thomas of Acon, USA; Eminent Prior of Idaho Priory No. 13, Knights of the York Cross of Honor; member of the Royal Order of Scotland; Founding Senior Warden and current Sovereign Master of Star Garnet Council No. 560 of the Allied Masonic Degrees for the United States of America; 3° (Fellow) of the Royal Order of the Masonic Knights of the Scarlet Cord; Knight Commander of the Royal Order of the Red Branch of Eri; Honorable Commissary General and Honorable Assistant Grand Secretary of Syringa Order No. 121 of the Order of the Sword of Bunker Hill; member of Ye Antient Order of the Corks; Very Honorable Deputy Commander-General of the Masonic Order of the Bath of the United States of America; member of Salish Court No. 96 of the Masonic Order of Athelstan; member of El Korah Shrine of Shriners International; Knight Priest of Redemption Tabernacle No. XL of the Holy Royal Arch Knights Templar Priest; and a IX° or Magus, the Primus Celebrant of Idaho College, and a member of Wyoming College of the Societas Rosicruciana in Civitatibus Foederatis (SRICF).

I'm a member of the Apostolic Johannite Church and a novitiate of the Oblates of the Temple and St. John (ObTSJ).

I served in the Idaho Army National Guard for 12-years as an Intelligence Analyst and an Unmanned Aircraft Instructor-Operator with two deployments to Iraq (Operation Iraqi Freedom III and Operation New Dawn).

I'm also a member of the Kappa Rho Chapter of the Kappa Sigma fraternity and served as House Manager, Grand Treasurer, and Grand Procurator (the judicial officer and 2nd-in-command).