Today marks an important day in history. This afternoon the Province of the United States of America was dissolved and the Grand Master's Council in England constituted Ye Commemorative Order of St. Thomas of Acon USA in Reston, VA.

The following officers were installed to lead the newly established Grand Council:

The history of the Commemorative Order of St. Thomas of Acon in the US dates back to October 1999 when a large group of Mason, under the leadership of Reese Harrison, went to England and were initiated. At the 2000 Masonic Week, Pilgrim Chapel No.11 and Trinity Chapel No.12 were constituted, and for 4-years were the only two Chapels in the US.

By 2014 the Province of the United States of America had grown large enough to separate and create its own Grand Master's Council. The Grand Master, Sir André of Byron, has stated that due to English roots, "we will continue to maintain all of the flavors of our English foundation. We will have the same rules for officeholders and honors as we now have under the English Constitution."

Today started with the meeting of Trinity Chapel No.12 then the Sir Melvyn of Wud Plumpton, Grand Master from England, then established two new Chapels. After a Festive Board, the Grand Master's Council reconvened where he invested Sir André of Byron and Sir Reese of Bexar with Knights Humilitas, the highest honor in the order. Sir André of Byron was then installed as Most Worthy Grand Master of the United States of America and Sir Reese of Bexar was installed as the Most Eminent Grand Prior. It was then Sir André's duty to install some of his officers and then invest Sir Matthew of Philadelphia with the honor of Knight Caritas. The Grand Masters, Grand Priors, and Grand Secretaries of both Grand Councils signed an accord that laid the foundation for the growth and recognition of each other. The Knights present then approved the constitution and ritual of the order.

Well, the last few days have been very busy for me. Wednesday I flew into DC; I have moved to the East Coast for a few months to work as an intern. That night I got in, settled down, and got my bearings.

Then Thursday and Friday, I decided to visit the sites from the book "The Lost Symbol." I visited the Capitol Building, Library of Congress, National Gallery of Art, US Botanic Gardens, Freedom Plaza, and Franklin Square. I also visited the White House Visitor Center, Washington Monument, Lincoln Memorial, and WWII Memorial. Saturday was a day of relaxation...for my feet.

Sunday, I had the pleasure of meeting with Bro. Shawn Eyer at the George Washington Masonic Memorial and then going to Oldtown. I have had fun so far on the East Coast and look forward to the rest of my time here. Now the time has come to get ready for my Internship.
Posted by Barry at 6:17:00 PM No comments:

"The day dawns prosperous: be propitious all, with tongue and heart. Now good words on a good day must be spoken. Let ears be free from lawsuits, let mad disputes forthwith be absent. Malicious tongue, put off your business!"

This quote is taken from the first book of Ovid's Fasti, a six-book poem on the origins of holidays in the Roman empire. A great portion of the first book deals with the god Janus, who is the god of beginnings, travel, transitions, war and peace, doors, gates, passages, and endings, which is significant to the New Year and for whom the month January is named after. It is important to note that the Greek's had no equivalent god to Janus. 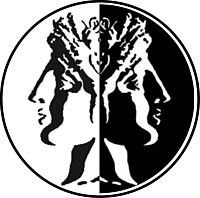 The god Jaus was often depicted as having two faces so he can look forward to the future and to the past. In Ovid's Fasti, Janus appears before the bard holding "a staff in his right hand and a key in his left." He goes on to tell Ovid that he is known by many names including Chaos and describes that he has been around since the elements separated and the material world formed. He states that he was formless and as the world came out of chaos, so did he:

"At that time I, who had been a round mass and a bulk without form, resorted to a shape and limbs appropriate to a god. Even now, small indication of my once chaotic shape, what's in front and behind in me appears the same."

He is most known for time and transition, but being the god of the "beginning and the end" also included conflict. During times of war, the doors of the Temples of Janus were left open and closed during times of peace. The exact nature of Janus is debated, but he is seen to be a god venerated not and used to symbolize more than just sacred practices, but even the mundane; he is venerated for his part at the beginning of time, but is invoked by farmers during the harvest. There were numerous rites to Janus because he could be worshiped at the beginning of the year as well as each month, and was also venerated on the beginnings and ends of important events such as the harvest or military seasons. He is sometimes also seen as a uranic deity which is the personification of the sky and is a deity dealing with the creation myth of a particular faith, religion, or mythology.

The first, or kalends, of January, was especially important in the celebration of Janus. It was to be a day of good luck and kindness so as to be a good omen for the rest of the year. This custom carries on today with the singing of Auld Lang Syne or serving "good luck foods" on New Years Day.

January 1st is set as the beginning of the New Year and is held in the cold of winter rather than the spring when life springs anew because Janus states:

"The winter solstice is the first day of the new sun, the last of the old. Phoebus and the year take the same starting point."

Now, let us not dwell on the past, but look forward to a new dawn, a bright new year full of opportunity. I wish you all a very Happy New Year!!