Poll: Top 10 Events in the York Rite of Freemasonry

I am running a poll to see what my readers see as the Top 10 Events in the York Rite of Freemasonry. This poll will run until the 15th of November where I will release the results along with a post concerning the Top 10 events and their significance in York Rite Masonry.

You are allowed to select multiple choices and I ask that you select only 10.
Posted by Barry at 1:46:00 AM 1 comment:

It's been a busy last few days of Masonry. On Wednesday my Eastern Star Chapter had its Official Visit by the Worthy Grand Matron and Worthy Grand Patron of Idaho. The day started with the School of Instruction where the Grand Matron gives advice and tips to the performance of our rituals. We then exemplified the Initiation ritual and as Worthy Patron of my Chapter I have a very large part. Everyone did a fantastic job. We had a nice dinner before going into the meeting where the sidelines were filled with guests from all over the State. 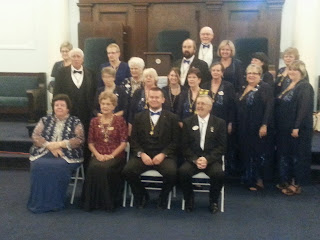 After finishing up with class on Thursday, I headed to the Red Lion in downtown Boise to attend the Wine and Cheese Social that kicked off the 2013 Northwest Regional York Rite Conference. It was a good night to run into some of my Companions I haven't seen in several months to several years. Afterward several of us met up at a Companion's room to enjoy some good Scotch. The camaraderie was amazing as we talked about anything and everything with a good group of men; even the Most Puissant General Grand Masters of Cryptic Masons International stopped in for a bit. Friday I attended the Grand Encampment's Breakout Session and enjoyed some of the presentations by the Most Eminent Grand Master and his officers (I refer more to this in a post towards the end of the year).

After the Breakout Sessions were finished for the day, we had some time before the Social Hour and Banquet started so I hung out with some of the Twin Falls Companions. When it came time for the Banquet I had the pleasure of bringing a good friend and Brother who was in town from Portland for the Boise State Homecoming game that is today. Larry Weaver, the Most Puissant General Grand Master, initiated a new member into the Order of the Secret Vault. I, along with several others, were honored with a medallion for our completion of the 3rd Year of the Emerging Leader program. For our 4th Year we must propose and complete a project a body of the York Rite at one of the jurisdictional levels.

It has been a busy last week or so, and more is to come in the next coming weeks, but now it's time for some Boise State football! GO BRONCOS!!
Posted by Barry at 3:36:00 PM No comments: King Hiram of Tyre is a significant character in Craft Masonry. He is introduced into Masonry as a friend and ally of King Solomon who assists the latter in building the famous House of God in Jerusalem. What isn't as widely known is that he was also an ally of King David, Solomon's father, and assisted him in the building of his palace in Jerusalem. Tyre is an ancient Phoenician seaport and is located in what is now known as Lebanon and is currently known as Sur. It was from Lebanon the famous cedar found in both David's palace and King Solomon's temple came from. Aside from supplies, King Hiram was known for supplying artisans, woodsmen, carpenters, stone masons, and other such workers to assist in the building of various famous edifices as Tyre was a well-known center for architects and artificers.

King Hiram was a Phoenician king who reigned from around 980 to 947 BC (although this date may vary by 10-years). He is said to have lived to be 53-years of age, but reigned only 34 of them having taken the thrown after his father Abibaal passed and was succeeded by his son Baal-Eser. Although there exists some confusion from Biblical text as the timelines don't quite match up as Solomon and David deal with a "King Hiram" for a time of around 54-years. Some speculate that there may be two King Hirams, but with available evidence it is only speculation and guessing, and that is a topic for another time as the irregularities are hard to overlook.

During King Hiram's reign the city of Tyre grew to become a important Phoenician city, particularly for trade; this could have been partly due to the alliance with Solomon and David who gave Hiram access to major trade routes to Egypt, the Arabian peninsula, and Mesopotamia.

Though many contributions of his life are recorded, there is hardly any information accounting for his death. The only surviving record of his death is the sarcophagus in which he was interred. The tomb of King Hiram is located a couple minutes drive Southeast of Tyre in the village of Hanaway. It is a colossal limestone sarcophagus built upon a high pedestal. I had no idea this monument even existed until I saw a mention of it on Facebook and decided to research the little bit of information there is on the tomb. 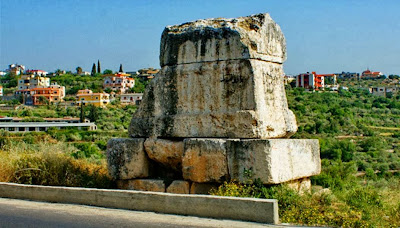 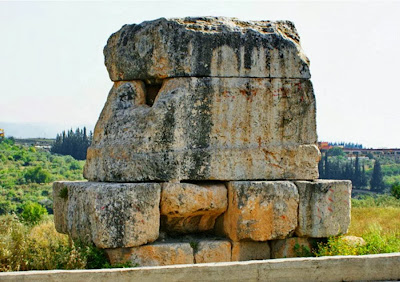 Well, what a long day or rather long last two days. Friday afternoon, I and two other Brothers drove out to Portland to attend Clontarf Council #69's meeting yesterday. At the meeting we held elections and the new Excellent Chief appointed me as Sentinel of the Council.

The big reason for attending though was I got to see my friend Ron be initiated into the Council and I got to play a small part in the conferral so overall it was a great day. It was also good to see so many of my Oregonian and Washingtonian Brothers which I see on rare occasions like this, but several of them I will see this next weekend at the Northwest Regional York Rite Conference that is being held in Boise.
Posted by Barry at 1:04:00 AM No comments:

I Am a Mark Master

I skilfully worked the stone, it was hard, rough, and cold.

Then taken from me and thrown, only square work I was told.

I felt so useless and ashamed, the Overseers were on guard.

They sent me whence I came, in quarries where I laboured hard.

The weeks end came about, and I went to collect my pay.

"Impostor", the others shout, and I was abruptly taken away.

The Craftsmen began to protest, then they all started to roil.

An end was put to the unrest, and then all returned to toil.

Others would watch to see, as I continued on my piece.

When their eyes were on me, my drudgery would increase.

Then listen to hear them say, after another glance, good work.

Facing the men behind cages, this time was not a disaster.

Taught to collect my wages, now, I am a Mark Master.