The media did pick up the story and here is an article from the Idaho Statesman: 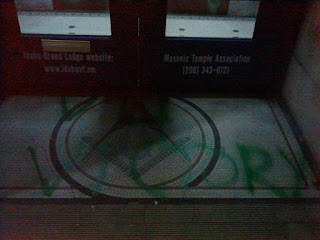 The graffiti read "V 4 Victory." Those were the same words spray painted at the Masonic Temple in Meridian this summer, said Corey Turner, vice president of the Boise Masonic Temple Association.

"We don't know who it is, or who to suspect," said Turner. There was no other damage to the building. Vandals broke a window at the temple in Meridian, but didn't damage that building otherwise.

I am for one, very appreciative of Ultimate Carpet Cleaning for their generosity.
Posted by Barry at 2:43:00 PM No comments:

Tonight, or rather this morning, when I jumped on Facebook I saw that a good friend and Brother who leads the Temple Board for the Boise Masonic Temple posted this picture: 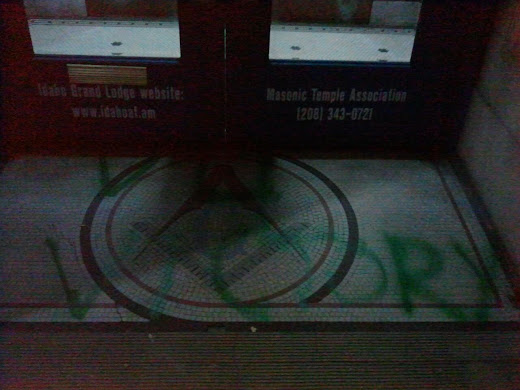 I am shocked and appalled at this act of vandalism and I hope the perpetrators are caught.  I never would have imagined this happening to a Lodge in Idaho, but I guess anti-Masons are everywhere.

To those who did this, you are a bunch of cowards.

I wish everyone a very Happy Thanksgiving!!  This is a year for me to be truly thankful for a great many things. I owe so much to my supports in my life: God for keeping me, my family for their unending love and support for me in my many endeavors in life, my friends who make everyday fun and fulfilling, and to the Masons who have made the last 5-years memorable.  Bless all of you and have a wonderful day. 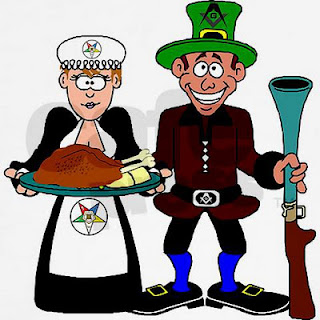 As I said during the previous post, I talked about the Under 40's committee.  At November's Stated meeting I held a survey of the membership covering what influenced them to join, what they liked about the organization/meetings, and what would they like to improve.  A third of those that answered joined the York Rite were seeking further light in Freemasonry.  Over half of those that joined enjoy the fellowship provided by the York Rite.  In the "Improvements" section they had the chance to pick up multiple choices so I'm only going to give the #1 answer.  77% of those surveyed (22% of the answers given) want more...education programs.  This answer was given not just by the younger crowd, but was spread across the spectrum of ages.

The Scottish Rite has its Master Craftsman Program which states the program is intended to:

Increase and test your knowledge of the Scottish Rite while you learn about its structure and organization, its rich history, and its deeply philosophic Masonic teachings

For a nominal price of $35 they issue you a book with 6 quizzes to take, and after one has taken it a certificate of completion and lapel pin is issued.  This could be done with the York Rite and be an amazing success.

The York Rite has an amazing history; an interesting relationship between the 3 bodies; and rich symbolism and lessons taught in the degrees and orders.  I see some hurdles though to overcome:
The easiest thing may have a separate program for each body, but I would wish to unite the education program.

The curriculum I had in mind would follow in a fashion similar to this:

None of this is set in stone and I will gladly take any assistance/advice, but in the meantime I plan on starting an Education Program at each York Rite meeting.  The piece I will read will be tailored to the specific group meeting and it is my hope that some will learn more and inspire them to start researching themselves.
Posted by Barry at 2:08:00 AM 3 comments:

That leads me to the current goals of the committee.

1. Determine the interest of the “40 and Under” demographic of R.A.M.
2. Assist in providing content for the R.A.M. E-magazine
3. Update the training ligature of the GGCRAM
4. Assist in the organization of a ‘Future Leaders’ Program

I am currently working on a survey for new members and absent members alike to see what they would like to see from the York Rite.  I'm trying to maximize the experience of the members, revitalize and stimulate the Companions.

If anyone is interested in assisting with this committee, contact your State's Ambassador to the General Grand Chapter.
Posted by Barry at 8:25:00 PM 3 comments:

My Station and Places: Generalissimo 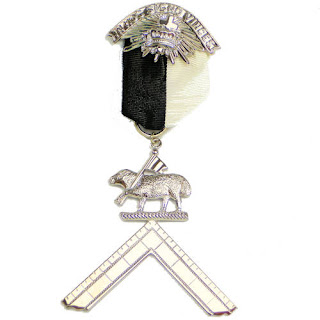 The Generalissimo is the second officer in a Commandery of Knights Templar.  His duty is to assist the Eminent Commander in the dispatch of business and, in the Commanders absence, preside over the Commandery.  The use of this title is fairly new and peculiar to American Masonic Templary.

Merriam-Webster defines Generalissimo as "the chief commander of an army" the first use of this word was in Italy around 1621.  It originates from "generale", Italian for General, and the suffix -issimo, itself from Latin -issimus, meaning "utmost, to the highest grade".

On the symbolic interpretations of the jewel of the Generalissimo, Sir Knight George L. Marshall, Jr., wrote in the March 2011 edition of the Knights Templar magazine the following:

The jewel of the Generalissimo is shown at right. The metal is silver color for both the suspension bar and the jewel as it is for all remaining officers’ jewels as well. The jewel is a square, surmounted by a paschal Lamb. The square is to remind you that friendship and love should ever govern Freemasons and particularly Knights Templar. The square, as we know, is the jewel of office of the Worshipful Master of a Blue Lodge. Additionally, we are taught that the square is a symbol of morality. Since the square was used by operative masons to prove that angles were 90° or “right,” it naturally became an emblem of accuracy, integrity, and rightness. As stones are cut to fit into a building, so our acts and thoughts are built together into a structure of character badly or firmly and must be tested by a moral standard of which the simple square is a symbol.

The paschal lamb atop the square has long been a symbol of Christ, apparently coming into use about the 15th Century. This symbol is sometimes referred to by the Latin name Agnus Dei (Lamb of God) or in heraldry, Holy Lamb. Heraldry defines it thus: a representation of a lamb passant [walking] having around its head a nimbus [halo] and supporting on the dexter [right] shoulder a crosslike staff bearing a flag argent [silver or white] charged with a cross gules [red].

(Words in square brackets are supplied by me.) The term “paschal” originally related to the Passover, or Seder, of the Jews, and the paschal lamb was a lamb slaughtered and eaten on the eve of the first day of Passover. Jesus, the Lamb of God, was crucified during the time of Passover and so became our symbolic paschal lamb. The cross borne by the lamb represents the manner of his death and the flag His banner under which we as Templars have become His Knights. The walking or marching lamb illustrates that activity we should pursue in marching steadily onward to help spread His kingdom on earth.

Thus, this jewel also reminds us to conduct ourselves with those high standards of morality and character which were taught by the Lamb of God while He walked among men and with that unconditional love that He exemplified in His sacrifice on Calvary.

Be thou Faithful unto Death,
and I will give Thee a Crown of Life
Posted by Barry at 1:30:00 AM No comments:

Well this tonight was the Stated Communication for the York Rite bodies in Boise, Royal Arch Masons presided.

The meeting opened with 25+ in attendance. When we finally came to the Elections, and so came the nominations.  In each body I was elected as follows:

The meeting was nice and short with an excellent dinner beforehand.

November 19th is Day 2 of the York Rite Fall Festival

December 3rd is a meeting for Tri-Valley College No.178, York Rite Sovereign College of North America.

December 8th is the December Stated Communication of the Boise York Rite, Council will preside.  After the meeting, the Chapter and Council will do their officer installations.

December 15th is the officer installation of Idaho Commandery No.1 with drinks and snacks afterward.

Tomorrow night is Election Night for my Lodge so that will be interesting.
Posted by Barry at 10:31:00 PM No comments: 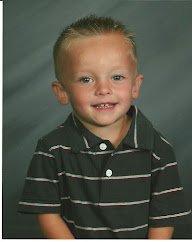 I was in training for my Iraq deployment when it happened and I found out through Facebook.  I knew I had to, but I dreaded the call.  What would I say?  I finally made the call and it was one of the hardest things I could do, to hear my friend, my brother, retell the story of his child's death. No matter how I found the tears cascaded down my face.

My little sister, God bless her, went in my place to the funeral.  It touched her too as she knew the family and she has a son just a few months younger than Asher.  It made her appreciate every minute she has had with her son.

"There's a man Ian never got to know - the man he was growing up to be. He's a good-looking, clear-eyed young fella, about 25. I can see him. He's the type of guy that men want to be around, because he has integrity, you know? He has character. You can't fake that. He's a guy women want to be around, too, because there's tenderness in him, respect, loyalty, and courage. And women respond to that. Makes him a terrific husband, this guy. I see him as a father. That's where he really shines. See, when he looks in his kid's eyes and that kid knows that his dad really sees him, he sees who he is. Then that child knows that he is an amazing person. He's quite a guy that I'll never get to meet. I wish I had."
- What Dreams May Come, Eulogy for a Dead Son

We miss you Asher!!