The Death of Jacques DeMolay 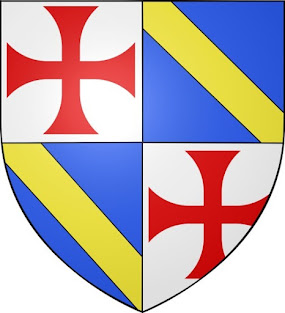 Well, today marks the spot where 698-years ago the 23rd and last Grand Master of Poor Fellow-Soldiers of Christ and of the Temple of Solomon, or the Knights Templar, was put to death by the French King. Besides the founding Grand Master, Hugh de Payen, Jacques de Molay is the most famous Templar Grand Master.
Life Before the Templars

Not much is known about De Molay's early life. Since it was said that he joined the Templars at the age of 21 in 1265 and died at the age of 70, historians believe he was born around 1244 in Molay, in the French region of Haute-Saône, in the county of Burgundy, at the time a territory ruled by Otto III as part of the Holy Roman Empire, and in modern times in the area of Franche-Comté, northeastern France.

As it is required to join the Templars, he was born into a noble family, but one of minor status.


Early Years in the Templars


As I said before, De Molay joined the Templars in 1265.  He was received into the Order of in a chapel at the Beaune House, attended by Humbert de Pairaud, the Visitor of France and England, and Amaury de la Roche, Templar Master of the province of France.

Little is remembered of his activities for the next 20 years, but it is said he spent most of his time in the East where legend says he was one of the survivors of the siege of Acre, escaping with the then Grand Master, Thibaud Gaudin.


At the death of the previous Grand Master, Gaudin, in 1292 De Molay was elected as Grand Master. By this time the Templars were located on the island of Cyprus due to the loss of the Holy Land to the Mamluks.

Immediately he departed on a European trip to seek support for another Crusade to retake the Holy Land.  This would prove difficult as morale was down and, politically, the Templars were seen as the "men who lost the Holy Land" so there was little faith in their ability to conquer Mamluks.  He was able to secure supplies to assist in the strengthening of the Cyrpus island, but couldn't muster any commitment for a new Crusade.

Jacques De Molay endeavored in the early years to reform the Order to strengthen it and prepare the knights for battle against the Egyptian Mamluks.

They tried several times to take the coastal city of Tortosa (Syria), but were relying on the assistants of the Mongols.  Their faith in Mongol assistance was misplaced, as they had their own internal/tribal issues, and each time they attempted to retake Tortosa they were pushed back to the staging island of Ruad.  Eventually, they would lose this island in September of 1302.  This eliminated the Christians's last foothold in close proximity to the mainland.

Following this loss, De Molay kept trying to raise enough support to raise a large enough army to invade and reconquer the Holy Land, but power struggles erupted in Europe; Phillip and the Papacy as well as the feud between King Henry II and his brother Amalric.  There was also a push for the knightly orders to merge, which we see both De Molay and the Hospitaller leadership reject.

Jacques De Molay it seems was pulled into a trap by the French King, Phillip le Belle.  The French monarchy was in debt to the Templars and wanted to erase the debt as well as the Templars for which it can be easily said that he saw the Templars as a threat to his divine right. When De Molay first went to France from Cyprus, he was greeted, as Chris Hodapp put it, "with interest and diplomacy" and completely deceived the Grand Master.

De Molay was in Paris on the 12th of October, where he was a pallbearer at the funeral of Catherine of Courtenay, wife of Count Charles of Valois, and sister-in-law of King Phillip. The next day, the trap was sprung and De Molay, along with Templars across France, were imprisoned and this would last for the aged Grand Master for the next 7-years.

Phillip had the Templars charged with heresy and many other trumped-up charges, most of which were identical to the charges which had previously been leveled by Phillip's agents against Pope Boniface VIII. By making the charges religious in nature, he wouldn't be seen as a greedy tyrant, but as a servant of God.

The initial charges held against the Templars numbered in five:
These charges would later increase, somewhere between 86 and 127.

During his interrogation in late October 1307, De Molay confessed that the Templar initiatory rites included denying Christ and stepping on the cross. It is said he was forced to write a letter, and after all, this occurred, King Phillip forced his new Papal puppet (Clement V) to order the arrest of all Templars throughout Christendom.

In December 1307, the Pope sent two Cardinals to interview De Molay where he retracted his confessions. This did not please the French King and a power struggle occurred. Two commissions, via a Papal Bull (Faciens misericordiam), were established one ran by the Church and one by the French Crown.

Eventually, De Molay was re-interviewed by the two Cardinals, but this time with French royal agents present where he was coerced into returning to his original guilty confession. In late 1309 he would again recant and say that he did not acknowledge the accusations and charges pushed against the Templar Order.

Just as De Molay did, many Templars confessed, under torture, to the charges.  The most common method of torture was known as "strapaddo" where the victim's hands, at the wrist, are bound behind the back.  Their bound wrists would be connected to a rope that was hung over a high beam whereby they would be lifted up, dropped, and stopped suddenly which would cause damage to the arms and shoulders. Other torture methods include strapping victims to the rack, which could cause major bone and ligament damage, and lathering the feet with lard which would be held over a fire until the feet would be roasted or burned away.  Under this kind of cruelty, it is not unreasonable to see that most would confess to any crime at the promise of stopping the torture.

The Pontiff wanted to conduct trials, but Phillip intervened and many Templars were burned at the stake as heretics (which did not require Papal approval to do). In 2001, a Vatican paleographer named Barbara Frale found a copy of the Chinon Parchment which states that in 1308 the Pope secretly absolved the Jacques de Molay and the Templar Order. This could explain why so many Templars were later burned as heretics or just simply disappeared from the jails.

Eventually the Pope, on March 22nd, 1312, would disband the Knights Templar through the Papal Bull, "Vox in Excelso".

On the 18th of March, 1314, De Molay and some other Templar leaders were dragged before the public.  It had been Seven (7) long years and finally, they were to receive the sentence agreed upon by the Cardinals, which supposed to be lifelong imprisonment.  To the surprise and dismay of both the crowd and Cardinals, Jacques De Molay and Geoffrey DeCharney, Preceptor of Normandy, stood up and stated they were only guilty of betraying their Order by giving into torture and confessing to these false charges.

While the Cardinals were meeting to deal with this, the incensed King Phillip pronounced that De Molay and De Charney were relapsed heretics to be burnt at the stake. A pyre was set up on a small island on the Seine near Notre Dame.

Contrary to the belief of the conventional "burning stake/pyre", it could not have been a stake with wood and accelerant at the base as the victim would die within minutes from asphyxiation. The fire and heat would rise and the flames would be swallowed, burning the lungs, and soon filling with fluid thereby causing asphyxiation. For De Molay to have lasted for a while and slow burn, it would have required a pyre built by a stake in the center with a ring of fire, most likely hot coals, around it (think of the point within a circle as a diagram), which would cause an oven effect cooking him slowly and burning him from the feet up.

Eyewitness testimony said that De Molay showed no sign of fear and it said during the slow death of burning at the stake, he decried the Pope and King, saying that their deaths would be avenged and that those would join him in the Afterlife. Whether he really cursed them or not, both the Pope and French King died within a year.