It is with a heavy heart that I report that Most Worshipful Brother James A. Davidson has dropped his working tools and passed onto that Celestial Lodge Above. Born on August 17th, 1925 in Scotland and died March 30th, 2020 in Idaho.

Jim served Freemasonry as the Grand Master of Masons in Idaho in 1993-1994, Past Grand High Priest of Royal Arch Masons of Idaho in 1973-1974, and Most Illustrious Grand Master of Cryptic Masons of Idaho 1978-1979. He was a Past Prior to Idaho Priory No.13 of the Knights of the York Cross of Honor and recipient of the Knight of the York Grand Cross of Honor (3 Quadrants). He was a Past Sovereign and an Emeritus Member of St. Michael's Conclave of the Red Cross of Constantine. He was a Past Preceptor of Redemption Tabernacle No.XL of the Holy Royal Arch Knight Templar Priests. Jim was also a Shriner, a Scottish Rite Mason, Order of High Priesthood, Order of the Silver Trowel,  a member of the Order of the Eastern Star, and a member of the Royal Order of Scotland.

This is just a preview of what he did for Freemasonry in Idaho. I met Jim early in my Masonic career and he was always a pleasant and happy person. He was in his 80s, but he had a grip like a vice wrench; when he shook your hand, you never forgot it. He was also a great ritualist and one of my most memorable periods of time with him was when he conferred the Order of the Silver Trowel upon me; he played the part of King David and did that part for over 40-years.

Jim was a proud Scotsman and until recent years he always did the Ode to Haggis at Robby Burn's Night or when a Royal Order of Scotland meeting was held.

The last time I saw Jim was when I visited the Payette York Rite when I was Grand High Priest.

Our current Most Worshipful Grand Master held Lodge one month ago so Jim and others who were too elderly could attend. Here is one of the last pictures I have of Jim (on the right). 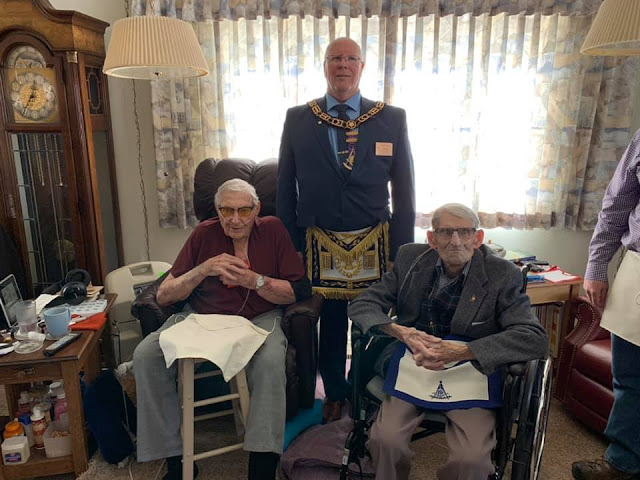 A common misconception that I see held by non-Masons, and often cultivated by anti-Masons, is that Freemasonry is a religion and, some go so far as to say that it is incompatible with Christianity, and they also state that Christians who choose to be Freemasons are not real Christians or are being deceived. Overlooking the fact that no man has the right to dictate to another in matters of belief or faith, they often don't use any logic or reason for their arguments. Simply put, Freemasonry is not a religion, nor is it a substitute for religion. The Masonic Service Association of North America has a great page concerning Freemasonry and religion.

Those calling Freemasonry a religion often quote Albert Pike who remains the favorite "whipping boy" of the anti-Masonic movement who often exaggerates his importance and misquote Morals & Dogma to further their own narrative. These are two cherry-picked quote that they often cite:

"Every Masonic Lodge is a temple of religion; and its teachings are instruction in religion" (Master Mason, Morals & Dogma)

"Masonry, like all the Religions, all the Mysteries, Hermeticism and Alchemy, conceals its secrets from all except the Adepts and Sages, or the Elect, and uses false explanations and misinterpretations of its symbols to mislead those who deserve only to be misled; to conceal the Truth, which it calls Light, from them, and to draw them away from it." (Master Mason, Morals & Dogma)

I have found that most quoting Pike have never actually read Morals & Dogma, but just copy and paste from some anti-Mason website. They also do not understand the context of the book or the context of that quote. They assume that this book carries the weight of law within Freemasonry when it doesn't. In the Preface, Pike even states that "Everyone is entirely free to reject and dissent from whatsoever herein may seem to him to be untrue or unsound." They also overlook this quote that comes later:

"Masonry is not a religion. He who makes of it a religious belief falsifies and denaturalizes it." (Elu of the Fifteen, Morals & Dogma)

Anti-Masons will also claim that the officer titles we use make us a religion. Some will argue that because the Lodge's presiding officer is known as the "Worshipful Master" that Freemasonry is a religion. The word "Worshipful" is an Old English term meaning "one deserving of respect". Freemasons do not worship the Worshipful Master, he is simply the Chief Executive Officer of a Lodge. It is interesting to note that in non-English speaking jurisdictions, Lodges refer to the Master as Venerable instead of Worshipful.

One absurd argument I've heard is that simply having rituals makes us a religion. Never mind that rituals are inherent to mankind. There are a number of categories of rituals such as social rituals, military rituals, celebratory rituals, worship rituals, funerary rituals, bardic rituals, and initiatic rituals. Freemasonry is filled with a variety of rituals, but the most notable is the initiatic or initiation rituals. Rituals remind us of what is important as well as providing a sense of stability and continuity in our lives; it educates us in the values of an organization, allows for knowledge to be passed from generation to generation unchanged, and binds the members together. Rituals alone do not make something a religion.

When one analyzes Freemasonry, it does not meet the characteristics to be a religion:
Freemasonry allows men of various faiths to come together, but that doesn't mean anyone is required to accept the beliefs of another as his own. Just like with partisan politics, sectarian religious topics are not discussed in Lodge so as to avoid petty quarrels that may disrupt the harmony of the Lodge. In this day and age when our country is so divided, it is refreshing to see that Freemasonry is a beacon of unity.

2. Freemasonry and religion. (n.d.). Retrieved from Grand Lodge of BC & Yukon: http://freemasonry.bcy.ca/textfiles/religion.html

3. Is Freemasonry a religion? (n.d.). Retrieved from Grand Lodge of BC & Yukon: http://freemasonry.bcy.ca/anti-masonry/anti-masonry08.html#religion

Of Panic and Promise

Well, with the response to the Coronavirus, Freemasonry has been impacted just like the rest of our world. Originally, the Societas Rosicruciana in Civitatibus Foederatis (SRICF), Allied Masonic Degrees (AMD), and St. Thomas of Acon were supposed to meet in southern Idaho, but whether advised or commanded not to meet, the only group that met was the SRICF and that was due to our candidate traveling over 600-miles.

The Fratres, as always, did excellent work and continued to uphold the standards of the Society. We've added another Frater to our College and advanced another the III°. Idaho College continues to grow, but still has plenty of work ahead.

Now Fratres and Brothers all, stay safe and stay healthy. 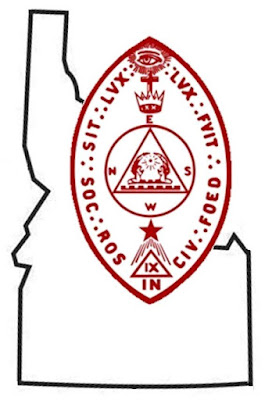 The next article in the Words & Phrases series is on the word "Magister Templi." This is a title used in the Knights Templar and Rosicrucians as well as other occult organizations. Magister Templi is Latin for "Master of the Temple".

Within the Societas Rosicruciana, the Eighth Grade is known as Magister and is the first of the Ruling Grades of the Society. While today the word "Templi" is dropped, some older documents of the Society show "Magister Templi." There are theories as to the relationship between Rosicrucianism and the Knights Templar. Obviously, the common use of a red cross and similar philosophies drives much of these theories; there are just as many theories between the Knights Templar and Freemasonry. However, when looking at this title, in the Templars, "Temple" was a reference to King Solomon's Temple while in the Rosicrucians the Temple would be the Vault of Christian Rosenkreutz. This suggests that a Magister Templi should be a Master of the history, rituals, and Mysteries of Rosicrucianism. It also symbolizes that a Magister should master not just his physical body, but also the Self, remembering that ancient Hermetic maxim "as above, so below; as within, so without."


1. Addison, C. G. (1997). The History of the Knights Templars, the Temple Church, and the Temple Book. Adventures Unlimited Press.

6. Master of the Temple. (1873). In A. G. Mackey, An Encyclopedia of Freemasonry and Its Kindred Sciences. 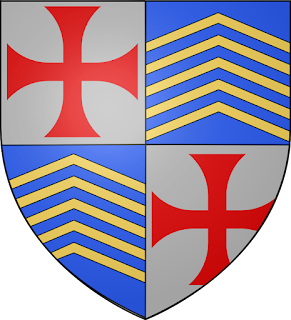 The 20th Grand Master of the Poor Knights of Christ and the Temple of Solomon was Thomas Bérard serving from 1256 AD to 1273 (during the 8th and 9th Crusades) and is noted for initiating cooperation between two other military orders: Knights Hospitallers and Teutonic Knights.

Little is known about his life prior to being Grand Master, but what is known is that after the end of the reign of Renaud de Vichiers, Thomas Bérard was elected. What is known is that when he took over the Templars, the Holy Land and the Templar order were in dire straits. Templar and Christian properties were reduced to a mere few cities and fortresses.

The War of St. Sabas was a conflict between the rival Italian maritime republics of Genoa and Venice over control of Acre. This was started at the beginning of Bérard's reign, and the Templars were not spared from this war as they sided with the Venetians and the Hospitallers had sided Genoese. This war would last until 1270 when the Peace of Cremona and hostilities were officially ended between the two sides.

While the Christian civil war was still going on, sometime around the end of 1263 or the beginning of 1264, cooperation was initiated by Bérard with Hugo de Revel, Grand Master of the Hospitallers, and Anno von Sangershausen, Grand Master of the Teutonic Knights. If dealing with this Christian in-fighting wasn't enough, the Mameluk Baïbars murdered the Sultan of Cairo in 1260 and consolidated his power. In 1263, he attempted to lay siege on Acre, but retreated after a few days of fighting.

In 1264, the Templars and Hospitallers captured Lizon, a stronghold between Caïffa and Jenin. They then destroyed a Mameluk unit composed of 300 men.

In the next year, Baïbars started a campaign of brutality that devastated the Christian kingdom. In March 1265, he utterly destroyed Caïffa and Cesarea. He attempted to seize control of Chateau-Pelerin, but the Templars were able to repel the Mameluks. Baïbars turned his attention on Arsûf, but the Hospitallers were able to resist. After a month, the city surrendered after Baïbars promised to let everyone go free. As soon as the gates were opened, the knights were imprisoned.

In 1266, Baîbars attacked the fortress of Safed that was held by the Templars. Baîbars suffered huge losses and executed several of his generals in response to their suggestion to abandon the siege. After a month of fighting, the Mameluks were able to capture the fortress. Baîbars, again, made a false promise of leniency to the knights, but this time, instead of imprisonment, the Templars were all beheaded. Next fell Beaufort and Antioch, a devastating blow to Christendom. Gaston then fell and word came of Mameluks heading to La Roche Guillaume. He attempted to send a message to surrender, but this had already occurred.

Both the Templar and Hospitaller Grand Masters pleaded to the Pope for more support. Another crusade was preached, but only the Kings of France and Aragon responded, but a large contingent of Christian host sank during a terrible storm.

In February 1271, the Templars surrendered Chastel Blanc and retreated to Tortosa. In June, Montfort, the last inland fortification in the Holy Land was lost. By the end of 1271, the castle of Krak des Chevaliers would fall to the Mameluks which would lead to a 10-year truce signed between the Christians and the Mameluks.

Thomas Beraud died on March 25, 1273, and was succeeded by Guillaume de Beaujeu.