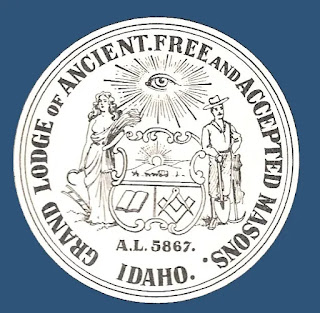 Today the Most Worshipful Grand Lodge AF&AM of Idaho met and held the 153rd Annual Communication. The officers and a limited few essential Brothers were allowed in the Lodge room while everyone else observed and participated via Zoom. Only the reports of the Grand Master, Grand Treasurer, Grand Secretary, Board of Custodians, Jurisprudence Committee, and Accounts & Finances were read and approved. Finally, we elected the officers for the 2020-2021 Masonic year. All other committee reports were in the advanced proceedings and resolutions were tabled until next year.

I'd like to congratulate now Jr. Past Grand Master, Steven L. Hall, on his year in the Grand East. He served as Grand Master of Cryptic Masons when I was Grand High Priest, and he and I spent a lot of time traveling together. We also discussed many of his plans when he would be Most Worshipful Grand Master. His year started out strong, but then COVID-19 came into the world and halted Masonry worldwide. He had to make many hard decisions and I didn't envy the burden he carried on his shoulders.

Now we have a new Grand Master of Masons in Idaho and I wish him the best of luck. At his installation, Grand Master Steven Zimmerman announced his plan to start reopening Freemasonry in Idaho which will also allow for the reopening of the rest of the Masonic family.

Email ThisBlogThis!Share to TwitterShare to FacebookShare to Pinterest
Labels: Masonry 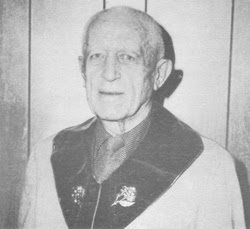 Harold V.B. Voorhis was born on January 3, 1894, in Red Bank, NJ. After high school, he attended Cooper Union College and Columbia University Teachers Extension. He worked for a number of years as a chemist for Bull & Roberts in New York City and even served in the US Navy during WWI.
He was raised to the Sublime Degree of Master Mason on June 1, 1920, in Mystic Brotherhood Lodge No.21 (Red Bank, NJ) and served as its Worshipful Master in 1937. He was also a Past High Priest and Past Grand Historian of the Grand Chapter of Royal Arch Masons of New Jersey, Past Grand Master of the Grand Council of Cryptic Masons of NJ, Past Eminent Commander and Past Grand Historian of the Grand Commandery of Knights Templar of NJ, 33° and member of the Committee on History in Supreme Council 33° of the Ancient & Accepted Scottish Rite for the Northern Masonic Jurisdiction, Fellow of the Philalethes Society, member of the Order of the Eastern Star Past Grand Preceptor (1951) of the Grand College of the USA of the Holy Royal Arch Knights Templar Priests, Past Great Chancellor (1968) of the Great Priory of America of the Chevaliers Bienfaisants de la Cité Sainte, and a number of other groups that will be discussed further.
Voorhis was one of the original "Innovators" who helped establish the Grand College of Rites and served as its first Grand Registrar and its third Grand Chancellor. Voorhis had been elevated by Henry Parsell to the 97° in the Rites of Memphis & Misraim before the Sovereign Sanctuary of the USA surrendered its charter to the Grand College of Rites.
After he took over as Commander-General (1939-1957) of the Masonic Order of the Bath, he started holding its meetings at Masonic Week, where it still meets today. Voorhis would serve as the Most Venerable Sovereign Grand Master of the Grand Council of the Allied Masonic Degrees for the USA from February 1943 to February 1944.
In 1946, he became Vice President of the Macoy Publishing and Masonic Supply Co. and would serve in that position until 1970. He was a prolific Masonic author covering subjects such as Masonic Rosicrucianism, the Order of the Eastern Star, Knights Templar, Royal Order of Scotland, Red Cross of Constantine, the Scottish Rite, and the Allied Masonic Degrees.
Voorhis was responsible for reviving the Societas Rosicruciana in Civitatibus Foederatis. Voorhis helped start the New Jersey College in 1931 where he first served as Secretary before becoming its Chief Adept in 1932. He would go on to help establish several other Colleges. He served as Junior Substitute (Deputy) Supreme Magus from 1940-1948, Senior Substitute (Deputy) Supreme Magus from 1948-1950, and Most Worthy Supreme Magus from 1950-1979; the longest-serving Supreme Magus.
Voorhis was a key player in the formation of the Grand Council of Knight Masons for the USA. Prior to 1967, the USA fell under the jurisdiction of the Grand Council of Ireland. For a time there were 2-provinces and Voorhis served as one of the Provincial Grand Superintendents. Eventually, the two provinces would be merged into one and Voorhis was the sole Provincial Grand Superintendent until 1967. Over the next 17-years, he grew the Knight Masons on an average of 75 new members each year. In February 1967, having the support of the Grand Council of Ireland and the support of American Knight Masons, the Grand Council of Knight Masons for the USA was formed and Voorhis was elected its first Most Excellent Great Chief.
He passed away on May 23, 1983, and left behind his mark on American Freemasonry.
References
1. Denslow, W. R. (1957). 10,000 Famous Freemasons - Volume IV. Richmond: Macoy Publishing. Retrieved from http://www.phoenixmasonry.org/10,000_famous_freemasons/Volume_4_Q_to_Z.htm
2. Hanttula, D. (2017). The Masonic Tour Guide - Vol.1.
3. Harold Van Buren Voorhis. (n.d.). Retrieved from Wikipedia: https://en.wikipedia.org/wiki/Harold_Van_Buren_Voorhis
4. Jordan, D. L. (2002, May 15). A History of Knight Masonry in the United States of America. Retrieved from MasterMason.com: http://www.mastermason.com/StPatrickCouncil/a_history_of_knight_masonry__in_.htm
5. Marples, J. A. (2015). The Brotherhood of the Rosy Cross, Blossoming yet Thorny. Retrieved from Nebraska College, SRICF: http://www.masonic.benemerito.net/msricf/papers/marples/2015-06.marples-brotherhood.rosy.cross.blossimng.yet.thorny.pdf
6. Shute, J. R. (1975). The Innovators. Retrieved from Grand College of Rites: http://grandcollegeofrites.org/innovators/
7. Voorhis, H. V. (1952). Masonic Organizations and Allied Orders and Degrees. Red Bank, NJ: Press of Henry Emmerson.
8. Voorhis, H. V. (1983). A History of Organized Masonic Rosicrucianism.
Posted by Barry at 3:42:00 PM No comments: