It's been reported on the news and social media that a mob has pulled down the statue of Illustrious Brother Albert Pike, 33°, that was located at 3rd and D St. NW in DC. This statue was defaced early, but with the recent spree of ripping statues down, a group composed of around 80 people toppled the statue and then tried to light it on fire. 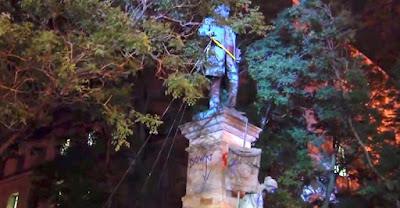 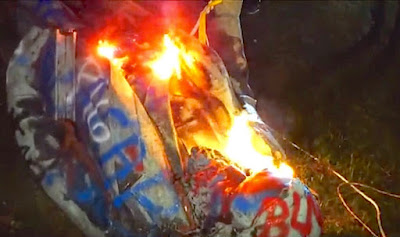 This statue was targeted because many believe it to be a statue honoring the Confederacy, but, in reality, the statue commemorates Pike as a Mason and specifically as a Scottish Rite Mason which is seen with him holding a copy of Morals & Dogma and that the Greek figure in front of Pike is holding a banner of the Supreme Council of the Scottish Rite. He’s not in a military uniform, nor does he carry a firearm or sword, as would be found on statues commemorating war leaders. This statue was purely Masonic and had nothing to do either with slavery or the Confederacy.

In his book, Esoterika, Pike ironically spoke on the dangers of the mob mentality:

"The populace has always been ready to turn upon and rend its benefactors.... the mob or populace is aptly symbolized by the setting maul or club, the fit weapon of blind and frenzied brutality. And as nothing is so unreasoning as a mob, as it hates nothing so much as the superiority of the intellect, which it always regards as its enemy, always the ready instrument of the Priesthood and of the Kings, it always has rejoiced when it could destroy the wise and the great."

As I mentioned in a previous article, people are taking advantage of the raw emotion to attack American culture and history. They are dividing rather than uniting.

Albert Pike is a controversial figure, mostly due to rabid anti-Masons fabricating conspiracies against him and Freemasonry. However, Pike was human and subject to the flaws inherent in mankind. As Brother Arturo de Hoyos stated, "We are all, to some degree, products of our environments, and have all changed our minds as we mature and receive better information." Such as it was with Pike who once disagreed with black men belonging to Freemasonry, but later changed his opinion. He even worked with the Prince Hall Scottish Rite with their ritual and corresponded with their Sovereign Grand Commander, who he acknowledged as such.

It's tragic to see such a destructive culture seek to destroy symbols of the past that they disagree with or do not understand. To me, these mobs are no better than the Taliban who destroyed Buddhist monuments or ISIS who destroyed ancient Assyrian works. We shouldn't be destroying our history.

If the death of George Floyd and the senseless violence that has eclipsed the peaceful protests wasn't enough, anti-Masons are taking advantage of people's raw emotions to spread disinformation to further their agenda against the Masonic fraternity and cause further division.
As of late, this picture has emerged and has been frequently used as evidence that the Police are owned and ran by Freemasonry. 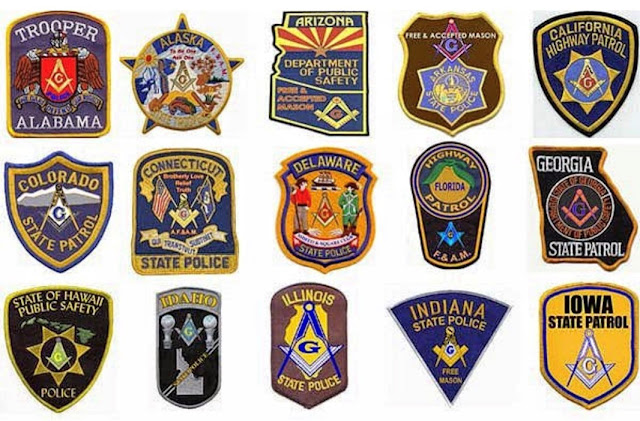 Anti-Masons, using this picture, come to the conclusion that the Police is not a legitimate body of government and are inherently evil by its subservience to Freemasonry. They think that an Obligation a Freemason takes overrides their loyalty and allegiance to anything else. Freemasons fail to understand or simply ignore the fact that our Obligations do not supersede the Obligations or duties to God, country, family, or friends.
Freemasons come from all walks of life and we take pride in our membership so many Masons have customized items personal to them to also reflect their membership. Those patches, pictured above, are collectibles only and not authorized for wearing on official uniforms or by any governmental agency.
Posted by Barry at 3:39:00 PM No comments:

Email ThisBlogThis!Share to TwitterShare to FacebookShare to Pinterest
Labels: Anti-masonry

Officers of a Priory of the KYCH

The basic organizational unit of the Knights of the York Cross of Honor (KYCH) is the Priory. The officers of the Priory are the Eminent Prior, Deputy Prior, Warder, Treasurer, Registrar, Prelate, Orator, Herald, and Sentinel.
The Eminent Prior is the chief officer of the Priory and is equivalent to the presiding officer in any other body of Freemasonry or concordant body. This officer carries the honorary title of Eminent which is rooted in the Latin word "eminentem" meaning "standing out, projecting, prominent, or high." A Prior is a traditional title used to represent a monk or priest who is the head of a religious house or order. This rank is below that of abbot. Prior comes to us from the Latin tongue and is used to mean "former, previous, first, etc." from which it was used to figuratively as "superior (in rank), forefather, and better." The KYCH is a Christian knighthood and the title presiding officer was commonly used by some among the medieval knighthoods.
The Deputy Prior is the second-in-command of the Priory, assists in the opening and closing of the Priory, has a ritualistic part in the initiation of new Knights, and assumes the duties of the Eminent Prior in his absence. This officer carries the title of "Deputy" which is rooted in the Latin words "de" and "putare" which combined means to "to cut away or purne", but adopted in Anglo-French words meaning to "appoint or assign"
Third-in-command of the Priory is the Warder. It is interesting to note that in the Commandery of Knights Templar, the Warder is a junior appointed officer, but in the Priory is an elected official and has a part in the initiation ritual. The word "Warder", like Warden, comes from the Proto-Germanic word "wardon" meaning "to watch or guard."
The Treasurer and Registrar correspond to the Treasurer and Secretary (or Recorder) in other Masonic bodies. In some Priories, these two officers are combined and held by one Knight. This is often done in smaller Priories, but to counter any possibility of bad book-keeping, the Prior is required to assign a Finance Committee whose job it is to examine the records of the Priory and ensure all is in proper order.
Corresponding to the Chaplain in the Lodge, the Prelate is the spiritual leader of the Priory. A Prelate is traditionally a high ranking member of the clergy and the word is derived from the Latin word 'prelatus' referring to a clergyman of "high rank or of preference over others."
There is no Orator known in the Blue Lodge or in the York Rite bodies, but in the Priory, the Orator is an appointed officer whose entire job is to announce the four Knights who will give the four lectures during the initiation ritua. An orator is a public speaker, often known for their eloquence. The word "orator" comes from the Latin word "orare" meaning "to speak."
The Herald is the first appointed officer within the door of the Priory and has duties similar to the Junior Deacon and Marshall within the Blue Lodge. A Herald was traditionally an officer who conveyed messages or proclamations as well as acted as diplomats or ambassadors for monarchs. This word derives from the old French word 'heraut' meaning "messenger or envoy."
The final appointed officer of the Priory is called the Sentinel and whose duties correspond with that of the Tyler in the Blue Lodge. The Sentinel guards the Priory from without the door to ensure the Knights are not caught or taken by surprise by those wishing to cause harm or those who are not entitled to be there. The Sentinel is one who stands guard over some kind of structure, whether it be an installation, a gate, or a passage. It is there job to prevent intrusion by enemy or those unauthorized. The word Sentinel stems from the Latin word "sentire" meaning "to watch or perceive by the senses."
Posted by Barry at 3:53:00 PM No comments:

Inspired by Saturday's meeting of Idaho Priory No.13 of the Knights of the York Cross of Honor, I am writing about the philanthropic work of the Convent General for the order which is known as the York Cross of Honour Medical Research Foundation.
The York Cross of Honour Medical Research Foundation supports research for causes, prevention, and treatment of cancer and in particular treatment of Melanoma. Currently, the Foundation supports the Norris Cotton Cancer Center. Located with Dartmouth College in New Hampshire, this center is one of the nation's premier facilities for cancer treatment and research.
Since 1980, the Knights have donated more than $1.8 million to support the work of researchers at the Cancer Center who are exploring promising new areas of cancer research. Their most recent gift of $75,000 is making it possible for Drs. Angeles and Turk to continue their vitiligo research. Vitiligo is an autoimmune skin condition that targets normal healthy skin cells that produce pigment. Cancer patients with vitiligo survive longer or have a better prognosis, but the exact reason is not known. The Turk Lab has discovered that mice with vitiligo have specialized immune cells called T cells in their skin. These T cells are extremely long-lived and potent killers of cancer cells. Dr. Turk is currently working with oncologists at NCCC to investigate T cells in melanoma patients with vitiligo.
From the website, our donations are financing a second program that "involves the study of cancer-drug resistance":

“If it wasn’t for the Knights’ support, this line of research—and the knowledge we gain from it—would be on hold”
- Dr. Mary Jo Turk 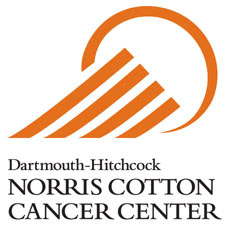