On this day people traditionally wear the poppy to signify their remembrance and honor of the fallen. The origin of the use of the poppy comes from the poem "In Flanders Field" by LTC John McCrae:

In Flanders fields the poppies blow
Between the crosses, row on row
That mark our place; and in the sky
The larks, still bravely singing, fly
Scarce heard amid the guns below.
We are the Dead. Short days ago
We lived, felt dawn, saw sunset glow,
Loved and were loved, and now we lie
In Flanders fields
Take up our quarrel with the foe:
To you from failing hands we throw
The torch; be yours to hold it high.
If ye break faith with us who die
We shall not sleep, though poppies grow
In Flanders fields
Posted by Barry at 3:00:00 PM No comments: 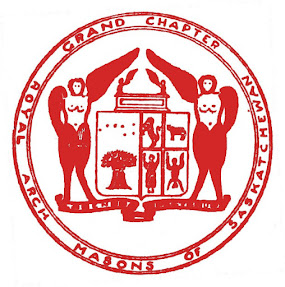 Au revoir to my Canadian Companions who have hosted me for the last 2-days. Thursday afternoon I flew as far as Calgary and then on Friday made it to Saskatoon to attend the Annual Convocation of the Grand Chapter of Royal Arch Masons of Saskatchewan. This jurisdiction falls under the North Central Region, but that Deputy couldn't make it so I was asked to attend.

Friday afternoon kicked off with the Order of High Priesthood conferral, followed by the Ceremonial Opening and Memorial Service of the Grand Chapter. I was honored with introductions along with so many other distinguished guests and for being allowed to take part in the Memorial Service. Friday night was the Grand Banquet where I sat at the head table with the Grand Z (Grand First Principal), Grand H (Grand Second Principal) and his wife, Grand J (Grand 3rd Principal who will be Grand Z during their Centennial), and the Most Worshipful Grand Master of Saskatchewan and his wife. After a delicious meal, I was asked to present the Bronze Medal.

Saturday morning I attended a Red Cross of Constantine Breakfast before the Grand Chapter reopened at 9am and received distinguished guests from sister jurisdictions and concordant bodies. I was honored to represent the General Grand Chapter of Royal Arch Masons International and I gave some comments that were well received. After lunch, the newly elected officers were installed.

The rest of the day I explored Saskatoon, or rather the Paris of the Prairie. It's a nice town and was beautiful to see in late Springtime. Now I'm getting to bed for an early flight home.

Another Grand York Rite session has been completed. The Northwest Department Commander and I flew in Thursday morning and the General Grand Ambassador for Washington picked us up. The day was filled with the Holy Order of High Priesthood, Thrice Illustrious Master, the Reuben Baer Past Commanders Association, and the Memorial Service. During lunch, I was informed that I was joining Tacobat Grotto of the Mystic Order of Veiled Prophets of the Enchanted Realm.

Friday afternoon was the Grand Council of Cryptic Masons of Washington. That evening was the Banquet of the Grand York Rite of Washington where I assisted in presenting several awards from the Grand Chapter and General Grand Chapter. I'd like to thank the now Junior Past Grand High Priest of Washington for his diligence and hard work during the past Capitular year.

Tonight is going to be dinner with friends before I fly home tomorrow and then back to work.

About 2-weeks ago I served as Chairman of the Committee for Distinguished Guests for the Grand Commandery of Knights Templar of Idaho. The Knights Templar is one of my favorite groups within Freemasonry and I am proud to be a Knight Templar, but often I see Sir Knights and non-Templars struggle with understanding the terminology and titles of our order because Templary has a unique set of titles and nomenclature that is different from Craft Masonry. This article is going to focus on those titles (honorary and official) of the Commandery, the Grand Commandery, and the Grand Encampment as well as the various terms in reference to meetings.

Honorary titles are used in addressing, introducing, or referring to an officer, and precede the official title, i.e. "Most Eminent Grand Master." The official title only is used by an officer when necessary to designate his own rank or station. You never use the honorary titles to describe yourself. In this distinction, Templary differs from all other branches of Masonry, where the honorary titles may be used in conjunction with the individual or name of the individual I.e. "Right Excellent Companion" or "Most Worshipful Brother."

In discussing the titles of a constituent Commandery, only one officer has an honorary title attached to their respective station, other than Sir Knight, and that is the 'Eminent Commander'. Some might ask why the 'Excellent Prelate' is not included and that is because the honorary title of "Excellent" is ritualistic and not bestowed by the Constitution. The Constitution of the Grand Encampment states, "In the case of Honorary titles the Constitution and not the ritual governs." All other officers use the title of Sir Knight before their station such as "Sir Knight Captain General" or "Sir Knight Senior Warden."

Section 235. One who has filled by installation and term of service, the office of Grand Master, Deputy Grand Master, Grand Generalissimo, Grand Captain General, Grand Prelate or Department Commander in the Grand Encampment;

For those officers at Grand Commandery:

or Commander in a Commandery; shall retain the title of the highest office attained by him in the Grand Encampment, Grand Commandery and Commandery, with the word, "Past" immediately preceding and qualifying the official title.

Past rank is limited to the offices named in Section 235 of the Constitution of the Grand Encampment. This means there is no such title or rank as Past Grand Recorder or Past Grand Prelate of Grand Commanderies.

In a Commandery (constituent or subordinate), there is no such title or rank as Past Generalissimo, Past Captain General, Past Prelate, Past Treasurer, or Past Recorder. The only "Past" rank in a Commandery is "Past Commander." This is found in the Decisions approved by the Grand Encampment. Please note that a Commander of a Commandery Under Dispensation does not retain the rank of Past Commander unless he serves as Commander once that Commandery has been chartered and then he must serve a full term of office.

If you wanted to make an introduction and make reference to a previously held office or station that isn't considered a past rank per the Constitution, you'd use "former" before the official title. For example: "Sir Knight John Smith, former Grand Recorder" which carries no actual rank, but identifies the member as having one time held the office mentioned.

Concerning the wearing of rank on the Templar uniform, such persons should wear insignia of the rank of highest position.

Not forgetting the wives of the Sir Knights, they are always introduced as "Lady." If you are introducing a Lady who is not your wife, it is done as follows: "Sir Knight John Doe and his Lady Jane" or "Lady Jane Doe, wife of Sir Knight John Doe." If you are introducing your own wife it is "My Lady Jane." If the Lady is a recipient of the Companion of the Temple (CT), you also include that in her introduction.