Well, another year has gone by and with it another Masonic Week in the DC area. Thankfully my trip went without any troubles even though Mother Nature was starting hurl winter storms my way. After getting checked in, I had a chance to sit down the Supreme Magus of the SRICF and pick his brain about the year. After that, it was socializing with all of the Brothers as they arrived.

First thing Thursday morning was the meeting of the Grand Master's Council of the Commemorative Order of St. Thomas of Acon of the USA. Matthew Dupee was installed Most Worthy Grand Master of the order and Louis Bartrand was installed as Most Eminent Grand Prior. After lunch, I attended the Grand Chapter of the Sovereign Order of Knights Preceptor which was presided over by my good friend, Bro. David A. Grindle. The Preceptors was followed by the Provincial Grand Court of the USA of the Masonic Order of Athelstan. Thursday night I had attended the exemplification of the degrees of Royal Ark Mariner and Knight of Constantinople. The degree teams for each degree did a fantastic job. The exemplar for the latter degree was Peter Brusoe, the Most Excellent Grand High Priest of DC, with whom I sat with afterward and discussed our respective Grand Chapters.

Friday morning started with the Grand College of Rites. I care deeply about this organization and I am happy to see it flourishing. The Society of Blue Friars followed. The Grand Abbott had named Piers Vaughn the newest Friar and he gave a presentation of the influence of Martinism on the Rectified Scottish Rite. Brent Morris then announced that after 15-years he was retiring as Grand Abbott and installed Arturo de Hoyos as the new Grand Abbott. After lunch, the Grand Council of Knight Masons of the United States of America convened. The Great Chief awarded the Knight Commander of Zerubbabel and Past Senior Grand Knight on many worthy Sir Knights and Cousins. I had the rest of the afternoon off as I am not a member of the Holy Royal Arch Knight Templar Priests. I wasn't feeling 100% so I called it early Friday night.

I woke up Saturday refreshed and attended the conferral of the first 3 Grades (Ostiarius, Lector, and Fellow) of the Royal Order of the Masonic Knights of the Scarlet Cord. I had the pleasure of being the exemplar during the Second Grade. The degree teams did a fantastic and impressive job. After the Philalethes Society luncheon, The Grand Council of the Allied Masonic Degrees of the United States convened. I congratulate Most Venerable Brother Paul Newhall on being elected and installed as the new Sovereign Grand Master of the Allied Masonic Degrees of the USA. After the All Masonic Banquet, the Masonic Order of the Bath met and conferred the degree on many candidates. I was elected to Very Honorable Lt. Commander-General for the order. Now I am all packed up and ready to head to the airport. It's time to go back to Idaho, to home.

Tarot Card of the Month: The Moon 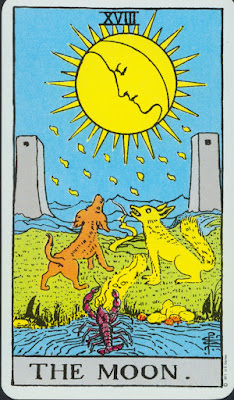 The Tarot Card for February is the Moon. The Moon is the Eighteenth of the Major Arcana in the Tarot card decks. The Moon can also be referred to as Intuition. The Moon symbolizes the planet Neptune, the element water, and Pisces in the Zodiac.

The Moon represents intuition, the unconscious, illusion, deception, confusion, bewilderment, falsehood, hysteria, and madness (lunacy). The Moon indicates that things are not as they seem. The details may not be clear making a decision that much harder to make.

The Moon depicts a full moon in the night's sky, sitting between two large towers or pillars. The Moon is frowning and looking down as Yod-shaped rays emanate from it. In the foreground is a pool of water with a crawfish crawling out of it. A dog and wolf stand in a grassy field howling at the Moon.

The moon is a feminine symbol representing time (often associated with immortality or eternity). It stands as a symbol of light in the dark of night. The moon also symbolizes the soul. The four stages of the moon are said to represent human development: the new moon is infancy, the crescent waxing moon represents youth and adolescence, the full moon is maturity and the apex of our strength, and the waning moon represents the decline of life. The towers symbolize duality - good & evil, life & death, light & darkness, male & female. Their similar appearance alludes to the difficulties that we face in distinguishing between them. The water represents the subconscious with the crawfish, symbolizing the early stages of consciousness as it unfolds. The dog and wolf represent the tamed and wild aspects of our minds.

Email ThisBlogThis!Share to TwitterShare to FacebookShare to Pinterest
Labels: Tarot 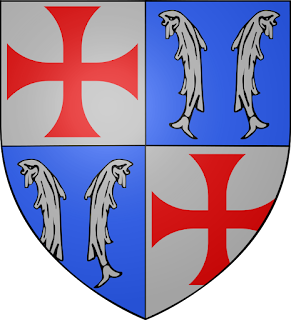 André de Montbard served as the 5th Grand Master of the medieval Knights Templar from 1153 AD to 1156 AD (during the 2nd crusade). Montbard was the second and last founding member of the order to serve as Grand Master, after Hugh de Payens. Montbard was also known for being the uncle to St. Bernard of Clairvaux who was a champion for the Templar order and wrote the Rule that governed the order.

André de Montbard is believed to have been born sometime around November of 1097 in the family castle in the Burgundy region of France. He was the son of Bernard de Montbard and Humberge de Tonnerre d'Angoulême. The Montbards were vassals of Count of Champagne as was Hugh de Payens. This same Count was also the one who donated the land to St. Bernard where the abbey of Clairvaux was established (the early Templar order was a very interconnected affair).

Little is known about Montbard's life, but it is known that he was in the Holy Land around the time the Templar order was established as he is mentioned to have carried letters from King Baldwin II and St. Bernard of Clairvaux.

From 1148 to 1153, Montbard served as Seneschal (second-in-command for the entire order). The previous Grand Master, Bernard de Tremelay, was killed during the Siege of Ascalon (January 25th to August 22nd, 1153). After the Siege was finished, Montbard was elected as Grand Master of the order. It is rumored that he only accepted the nomination to Grand Master to block the election of Guillaume de Chanaleilles who was a favorite of King Louis VII of France. He served only for three years and left no lasting fingerprint on the office of Grand Master; other than being the last of the founding knights. Montbard died on January 17th, 1156, in Jerusalem while in office and was succeeded by Bertrand de Blanchefort.

4. Were there Nine Original Templars? (n.d.). Retrieved from The Knights Templar: http://www.theknightstemplar.org/the-nine-original-knights-templar/

The Columbian Medal is the highest award one can receive from the General Grand Council of Cryptic Masons International. The Columbian Medal is a medal awarded to an outstanding Cryptic Mason for service to Masonry. This medal is similar to the Distinguished Service Medal in Silver in the General Grand Chapter in that only one award is given to each region and not more than three medals at-large per Triennium are awarded at each Triennial.

900th Anniversary of the Founding of the Knights Templar 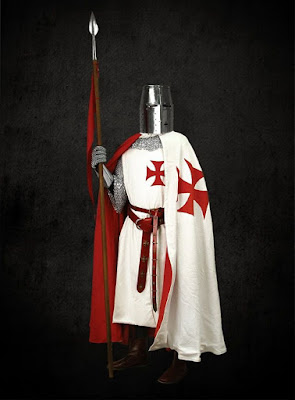 This year marks the 900th anniversary since the founding of the medieval Knights Templar. While the exact date is debated to this day, it is believed that sometime in 1119 (most likely toward the end), Hugh de Payens and a contingent of knights established the Poor Knights of Christ and the Temple of Solomon, also known as the Knights Templar; according to William, Archbishop of Tyre, it was nine knights while Michael the Syrian, Patriarch of Antioch, spoke of thirty knights. The Templar first received recognition from Baldwin II, King of Jerusalem, and Warmund, Patriarch of Jerusalem, which would occur in January of 1120 at the Council of Nablus. At the Council of Nablus in 1120, Warmund donated some land to the Knights Templar and the King gave the knights the Stables of Solomon as their residence as well as some villages.

The Templar order wouldn't receive papal recognition for a decade, by Pope Honorius II, and then, in 1139, Pope Innocent II issued Omne Datum Optimum, Latin for "Every Good Gift." This papal bull allowed the Templars to keep their spoils of war, placing donations directly under papal protection, and exempting them from paying tithe. This proclamation added a priest class to the hierarchy as well as making the members of order answerable to the Grand Master.

The Order was governed by what is known as "The Rule" which was written by St. Bernard of Clairvaux, nephew of Andre de Montbard who was one of the founding knights and future Grand Masters. The Rule covered all aspects of the life of the Knights Templar. The Rule included topics such as knight renouncing his former life and property, dress, eating, prayers, the hierarchy of the order, penalties, conventional life, penitence, and the manner of his reception into the order.

The Order became very popular among the European nobility and would exponentially grow in numbers and wealth with a presence across Europe and the Levant. The Templars would become known for their protection of pilgrims to the Holy Land while also being known for their impact during military operations. They would be mythologized by their financial acumen as well as their downfall in the 14th century culminating in the martyrdom of Jacques DeMolay. Even today there are many theories and myths about the order before and after their suppression by the French king, Philip. The Templars became associated with the rise of Freemasonry, the Holy Grail, alternative theories on Christ, and occultism.

For this anniversary, I am working on a series covering the timeline of the Templars as a commemoration to this Christian knighthood.