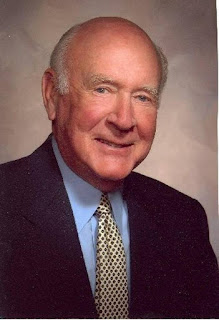 The State of Idaho and Idaho Freemasonry lost a good man yesterday. He passed away, just one day shy of his 86th birthday, from complications stemming from his lung cancer. For those not familiar with Cecil Andrus, he was the youngest serving state Senator at the time, the longest-serving Governor in Idaho’s history and the 11th longest-serving governor in US history (the first four-term governor), Secretary of Interior for President Carter, and the last Democrat to be Governor in strongly Republican-controlled Idaho.

Andrus was born on August 25, 1931, in Hood River, OR, and received a degree in Engineering from Oregon State University. Cecil Andrus served in the United States Navy Reserve from 1951 to 1955. He moved to Orofino, ID, in 1966 and immediately got involved in politics.

At the age of 28, Andrus ran for state Senate to bring about improvements he saw as necessary in the state’s education system. He won that race becoming the youngest serving state Senator in Idaho history. He won re-election in 1962 and 1964.

He ran for Governor in the Democratic primary but lost to Charles Herndon (a Brother Mason). However, Herndon died in a plane crash just 7-weeks before the November election. Andrus was placed on the ballot to take Herndon’s place, but lost to the Republican candidate. He returned to the Senate the next term too, again, represent a district from northern Idaho.

In 1970, he ran again for Governor and won. It is said his won was attributed to his opposition to mining proposals in the White Cloud Mountains. He won re-election in 1974 with over 70% of the vote. In 1977, he resigned as Governor of Idaho to serve as Secretary of Interior for the newly inaugurated President Jimmy Carter. With Andrus as Secretary of Interior, Carter declared permanent national monuments on 56-million acres in Alaska and Andrus ordered protection on 52-million more acres of public land that same year. While criticized, Andrus stuck to his guns on conservationism and wanted to make sure that the Alaskan wilderness would remain unspoiled. His term is also remembered for the Redwoods National Park Expansion Act. Former President Carter spoke today on the passing of his friend:

“Rosalynn and I join thousand across our nation in mourning the passing of Cecil Andrus, a friend from the time we served together as governors. Cece was the only person I considered for the cabinet post of secretary of the interior, and together we made conservation history with the successful passage of the Alaska lands legislation, which doubled the size of the National Parks, established large additions to the National Wildlife Refuge System, designated new wild and scenic rivers and protected for future generations entire ecosystems such as the Gates of the Arctic.

A special memory Rosalynn and I cherish is the float trip with Carol and Cece down the Middle Fork of the Salmon, competing in catching the most trout. Cece loved the outdoors and was a genuine conservationist. Americans are better off because of his service, and I am better because of his friendship.”

After returning to Idaho, it is said that he never spent another night in DC (that political life was not for him) and he ran for Governor. His second stint as Governor was marked by his opposition to federal efforts to store nuclear waste in Idaho. He went so far as to close the border for any shipments of nuclear waste; this stance continued to the present when he and former Governor Phil Batt threatened a lawsuit against the Department of Energy over a proposal to bring another shipment of nuclear waste to Idaho. Concerning the dumping of nuclear waste in Idaho, Andrus stated the following:

"If the decision were left to Idahoans, I don’t believe we would ever permit the state to effectively become a high-level nuclear waste disposal site, but the sad reality is that through neglect and incompetence, the federal government has essentially created just such a site in Idaho. Our children will likely be living with that reality long after many of us are gone."

Despite a controversial veto, he won re-election for the fourth and final time (winning all counties except two). The last term was marked by his lawsuit against the Army Corps of Engineers in hopes to force them to modify their dams for fish conservation purposes.

Due to his strong stance on conservationism, a wildlife preservation area near Cambridge, ID, was named “Cecil D. Andrus Wildlife Management Area”. In 1995, Andrus founded the Andrus Center for Public Policy at Boise State University, and in 1998, published his memoir, Politics Western Style. There is also an elementary school in western Boise named after him. Andrus received the Church Award for Public Service in 2014.

Andrus continued to stay active in politics and campaigning for the Idaho Democratic Party, even introducing Barack Obama when he was running for President in 2008. While he was a lifelong Democrat he also took part in many non-partisan endeavors and events. I had the pleasure of meeting this Brother on several occasions. The last time was during the meal at the inauguration of the Idaho Policy Institute last October. He was true to his regular-guy attitude, even when he was governor.

As a Mason, he was initiated as an Entered Apprentice Mason on February 24, 1960, passed to the degree of Fellowcraft on September 28, 1960, and raised to the sublime degree of Master Mason on June 14, 1961, in Orofino Lodge No.69. Orofino Lodge consolidated with Kamiah Lodge No.56 in February of 1992. He then affiliated with Idaho Lodge No.1 on May 12, 1993. He served the Grand Lodge AF&AM of Idaho as the 1971-1972 Grand Chaplain. He was awarded Fifty Year Membership in Idaho Lodge No.1 in March of 2011. He was also a member of El Korah Shrine of Shriners International, Boise Chapter No.3 of Royal Arch Masons, Idaho Council No.1 of Cryptic Masons, and Idaho Commandery No.1 of Knights Templar.

While his funeral will be private, there will be a public lying in state ceremony from the 30th and 31st in the rotunda of the Idaho Capitol building. There is also a public memorial service at 2pm at the Jordan Ballroom at the Student Union Building at Boise State University. RIP Brother.

Your time on Earth, spent in service.
A shining example of a Man to be.
But, you're now needed in the Heavenly Lodge.
Time has come for your 34th Degree.

Leaving behind the ones you Love.
Are the dues that you must pay.
From afar, you can watch over them.
A part of your obligation this day.

This is the farthest you can go.
The highest point of Masonic Life.
No higher an honor can be sown.
In God's Lodge, you must now stride.

God in the East, King Solomon, the West.
They open the Lodge for you this day.
You go the way as Masons before.
To sit with Pride, and stand with Praise.

The Alter shows the Love you felt.
Brotherhood of Man, One and All.
Your deeds reflect like shining Gold.
The jewel you wear is none too small.

You now stand, before this Alter.
Deserving of the rest you now seek.
No longer to toil the labors of life.
Grand Masters' wages are yours to keep.

Those of us you've left behind.
Will carry on the work for you.
Your dedication will shine for all.
A memorial you leave for all to view.

So, gather your wages, rest for now.
Lay back in the shade of Gods' great tree.
You've earned the honor, now bestowed.
MASONS in HEAVEN, THE 34th DEGREE.