The Crown and the Cross 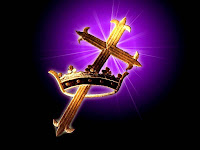 To point out the obvious, this symbol is the combination or uniting of two separate symbols - the crown and the cross. United this symbol has its own unique history and meaning, but separately each symbol has a much larger history and symbolic interpretation.


Be thou faithful unto death, and I will give thee a crown of life.
Revelations 2:10


Blessed is the man that endureth temptation: for when he is tried, he shall receive the crown of life, which the Lord hath promised to them that love him.
James 1:12

Together they represent the reward awaiting in Heaven that the Faithful will receive after the suffering and trials of this life on Earth; the cross secures and the crown assures. Some have interpreted it to stand for the meaning of the life, ministry, message, and glory of our Blessed Redeemer, our Savior, Jesus Christ.

The Crown, by itself, has traditionally been a symbol of authority and sovereignty, whether it is governance over a society/community or over oneself. Head coverings, like crowns, are also seen as a symbol of victory like you would see with the wreath or garland. As I talked about in Symbols of Royal Arch Masonry - Part 1:


Symbolically we can see through its circular shape it denotes perfection, which Heaven is seen as, and eternal life, and while wearing it we unite the spiritual world with this material world where the sovereign can receive divine inspiration to justly rule.

In the Masonic Templar Orders, there are many crosses used, but we will only talk of a few and discuss the general symbolism. For the Sir Knights of the Templar Orders and Christians, the cross reminds us of the crucifixion of Jesus Christ, but is much older than the Christian religion. First, let's look at what a cross is. 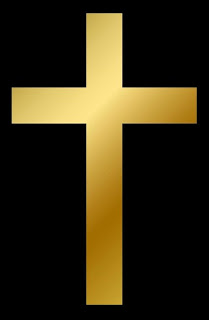 The Cross is simplistic in shape, usually two intersecting beams, a vertical one intersecting a horizontal one.  These may vary upon the religious denomination. There are basically four forms from which most other crosses stem. They are:


The Latin Cross (crux immissa) is a type of the cross in which the vertical beam sticks above the crossbeam.

The Greek Cross (crux immissa quadrata) is similar to the Latin Cross except that all four arms are of equal length. It is said this is the most ancient of the cross symbols used.

St. Andrew's Cross (crux decussata) is in the form of a diagonal cross (like the letter X). This cross also resembles the Greek letter Chi which is represented as 'X' which is one of the symbols Constantine saw in a dream which led him to victory against Maxentius, and which led Constantine to his legendary conversion to Christianity.

The Tau Cross (crux commissa) is a cross named after the Greek letter it resembles.

There are several variations of these crosses, particularly the first two, that are commonly seen in the Templar Order. The first common one, the Latin Cross infused with rays of light emanating from the intersection is a badge of a Commander and Past Commander, and the Latin Cross in this manner is also referred to as the Passion Cross. The second is the Templar Cross which is a variant of the Greek Cross. The Templar Cross (Cross Formée/Patée) is created from four equilateral triangles whose apexes meet at a common center. In our Order, the Templar Cross is used to designate a Grand Commandery officer and a Past Grand Commander. There are many other crosses seen in the Chivalric Orders of Masonry, but we will come to those in a later article.

It is important to note that neither the Latin nor Passion Cross was used as a Christian symbol until around the 7th century.  Prior to this, the lamb and fish were the most common Christian symbols. This style of the cross has been seen throughout history in such places as Africa, the Far East, Assyria, Phoenicia, India, Persia, Mesopotamia, Scandinavia, and Mesoamerica/Pre-Columbian America. To these ancient cultures, the cross represented the Sun or has been a symbol of Earth and nature with the number Four representing the Cardinal directions, the changing seasons, the four winds, the quarters of the moon, and the alchemical elements. Like the crown does, the cross may also emblematically represent the union of Heaven and Earth. The number four also reminds us of the Four Evangelists and their Gospels. By it are we reminded of time and the delineation of seasons, as it was on the Fourth Day that God put lights in the firmament to separate light from darkness, to mark days, and to outline the passing of seasons and time.

There have been many older cultures that have taken the cross as an emblem. One that comes to mind the quickest is the Egyptian Ankh (sometimes referred to as the Handled Cross, the Egyptian Cross, the Key of the Nile, or Crux Ansata) which is basically a Tau Cross with an inverted tear shape on its top.  It is said to represent Isis and Osiris in their sexual union. In other cultures, the cross represents the four directions in which the Sun shines. In Scandinavia, the Tau Cross symbolizes the fabled hammer of the god Thor.

As I stated above, the cross can be seen to represent the four elements which at its intersection symbolize the 5th element, Ether or quintessence, in Alchemy. With such crosses like the Templar Cross, you can also see a liberal representation that the four equilateral triangles symbolize the 12 Signs of the Zodiac.  The Greek Cross has been applied with a circular diagram of the Zodiac to indicate the solstices and equinoxes. The Greek Cross within a circle has appeared all over the Paleolithic world as a symbol of the Sun

It is amazing to see how the most simple symbols can have such an astonishing history and mean so much to so many different beliefs and opinions.  Combined they seem to stack and compound each other. Separately their history and interpretations span the Ages. Combined they can represent so much dear to the followers of that humble Carpenter who sacrificed so much 2,000-years ago.

6. The Cross: An Overview. (2011). Retrieved from Campbell M Gold: http://campbellmgold.com/archive_esoteric/cross.pdf