Located at 3rd and D Streets NW near Judiciary Square of Washington DC is a statue dedicated to Brother Albert Pike. Congress authorized, through a Joint Resolution, the placement of this statue on April 9, 1898. The Supreme Council of Ancient & Accepted Scottish Rite, Southern Jurisdiction, led the movement behind the erection of the statue, which they wanted to dedicate to the memory of his service to the Scottish Rite of Freemasonry. 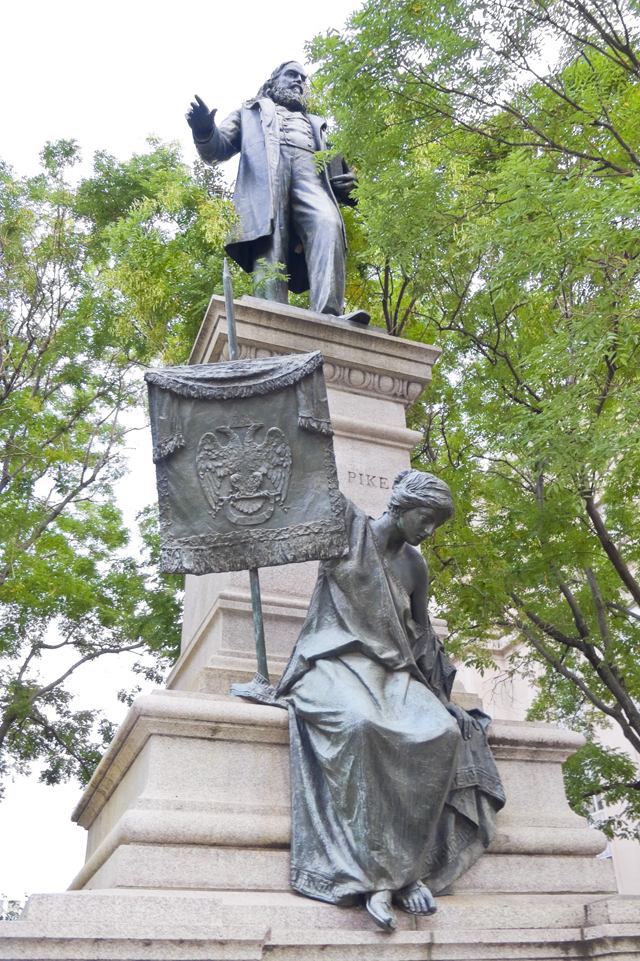 The statue sits at 11-ft tall, is composed of bronze, and was sculpted by Gaetano Trentaove. Pike is presented in civilian dress as a Masonic leader, not as a General for the Confederate Army; this statue was not intended to commemorate Pike's short military career with the Confederacy, but to honor him for his service to the Scottish Rite and Freemasonry in general. In his left hand is holds a copy of his book, "Morals & Dogma." The statue sits atop a granite platform at the bottom of which sits a Greek goddess holding the banner of the Scottish Rite. Carved around the platform are the words: Author, Poet, Scholar, Soldier, Philanthropist, Philosopher, Jurist, and Orator. On the front of the platform bears the words "Vixit Laborum Ejus Super Stites Sunt Fructus" which means "He has lived. The fruits of his labors live after him."

The statue has drawn calls for its removal because of his position in the Confederate Army (not realizing there are Confederate statues maintained by the US government all over the US) and the asinine theory that Pike was a founder and officer of the Ku Klux Klan. Dr. Walter Lee Brown, an expert on Pike, has stated that there are no primary sources that support the accusations that Pike was ever involved with the Ku Klux Klan. Even from a Congressional investigation no reference to Pike ever came up when looking at the activities of the Ku Klux Klan during the Reconstruction Era. As the statue sits on Federal land, the National Park Service maintains the statue. On September 20, 1978, it was listed on the National Register of Historic Places. 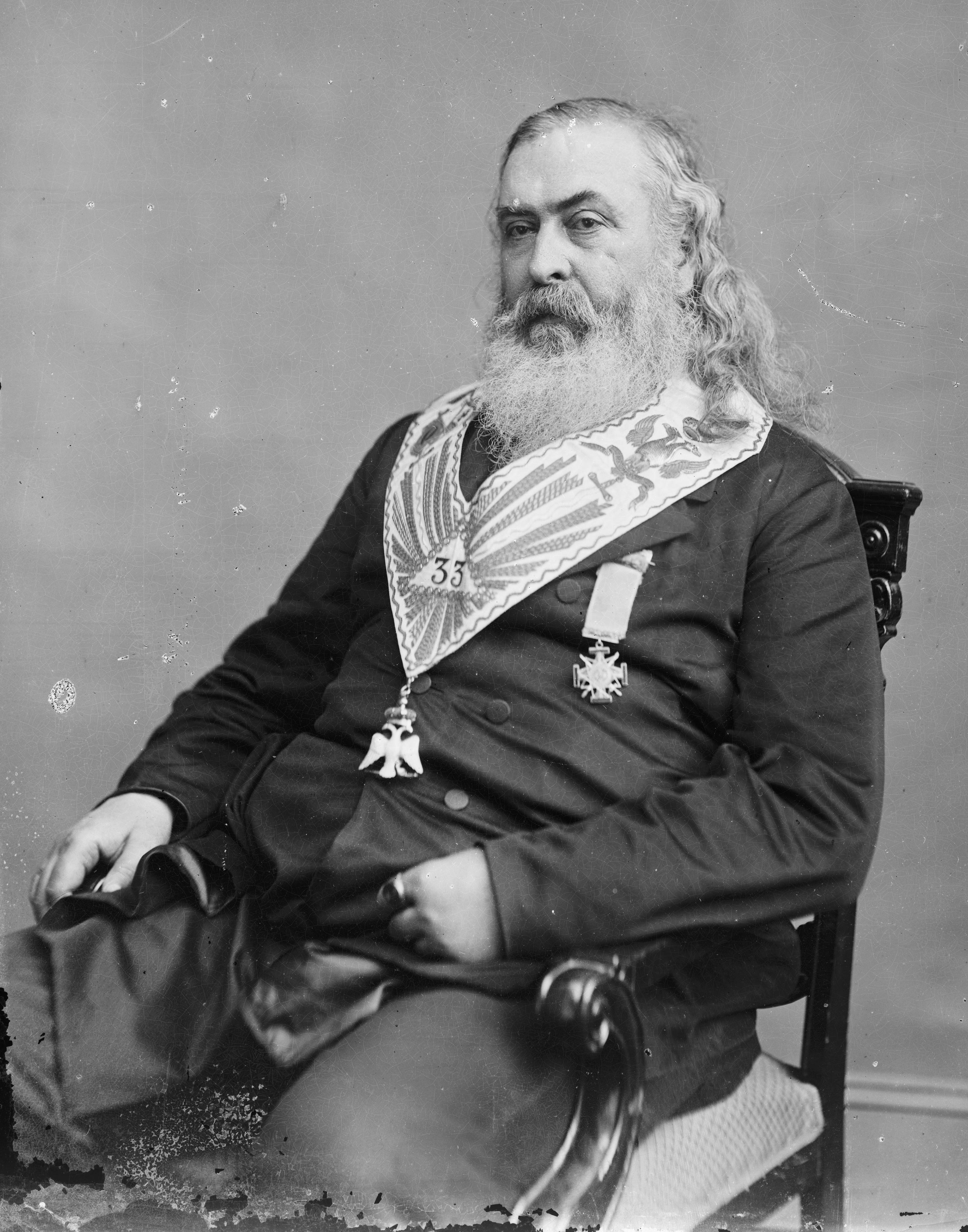 Albert Pike was born on December 29, 1809 in Boston, MA, the son of Ben and Sarah Pike. His childhood and early academics were spent in Newburyport and Framingham until his he was 15-years old. In 1825 he applied and was accepted into Harvard, but never attended due to the tuition fees. Instead of finding another college, he chose to educate himself and eventually became a schoolteacher in the region. Such were his determination that he learned to read Sanskrit, Hebrew, Greek, Latin and French.

In 1831, Pike left New England and headed West, eventually making it to Taos, NM; after having walked 500-miles after losing his horse. After Taos, he traveled to Llano Estacado before going to Fort Smith, AR.

In Arkansas he started teaching again and wrote for a newspaper called the "Little Rock Arkansas Advocate." His articles became so popular that he was asked to join the staff and eventually would become its sole owner. In 1834, he married Mary Ann Hamilton who gave birth to 11 children.

While in Arkansas he again took to the path of self-education and began to study law. He was admitted to the bar in 1837 and sold the newspaper. In 1859, Harvard wished to give him an Honorary PhD, but he declined it. In 1861, at the start of the Civil War, Pike was appointed as Commissioner of Native American Tribes; Pike had a relationship with Native Americans, having successfully counseled on behalf of the Choctaw Nation to the Supreme Court of the USA. The Confederates saw it important to have a strong relationship with the Native Americans and Pike was given power to oversee treaties with the Cherokee, Comanche, Osage, Quapaw, Senecas, and Shawnee nations. Pike believed that the South should stay with the North, but if they were forced into submission and treated as inferior then he believed the South had the right to secession. He would eventually resign from his position as an officer in the Confederate Army. With the defeat of the Confederacy, rebel officers such as Pike were indicted for treason, but Pike was given a pardon by President Andrew Johnson, a Mason himself.

His Masonic career started in 1850 when he petitioned Western Star Lodge #2 where he was initiated and passed in July 1850, and Raised to the Sublime Degree of Master Mason on November 4, 1850. He demitted from Western Star Lodge in 1852 to become a charter member of Magnolia Lodge #60. He would affiliate with other Lodges over the years in Tennessee, Louisiana, and Washington DC. He received the degrees and orders of the York Rite from 1850 to 1853 in Arkansas, and the Scottish Rite degrees in 1853 in South Carolina. In 1858, Albert Mackey would invite Pike to join the Supreme Council and would become the Sovereign Grand Commander the following year. He would hold this position for 32-years. In 1870 the Supreme Council, and Pike, moved from Charleston to Washington DC. He is most well-known for his reform in the rituals of the Scottish Rite and publication of "Morals & Dogma." Being beggared by the Civil War, Pike borrowed monies from the Supreme Council until they voted, in 1879, to place in the budget an annual income of $1,200 for the remainder of his life. Pike is remembered as an influential Scottish Rite Mason, but is far too often misrepresented, particularly by anti-Masons who use him as a whipping boy for their aggression against Freemasonry.

Albert Pike died on April 2, 1891, in Washington DC and was buried at Oak Hill Cemetery. Pike was disinterred and reburied at the House of the Temple, the headquarters of the Scottish Rite, Southern Jurisdiction for the USA. Pike was a man larger than life. He was a prolific writer and has left his mark on this world. He was an imposing figure standing over 6-ft tall and 300-pounds; he was the Merlin of his age with his waist length hair. 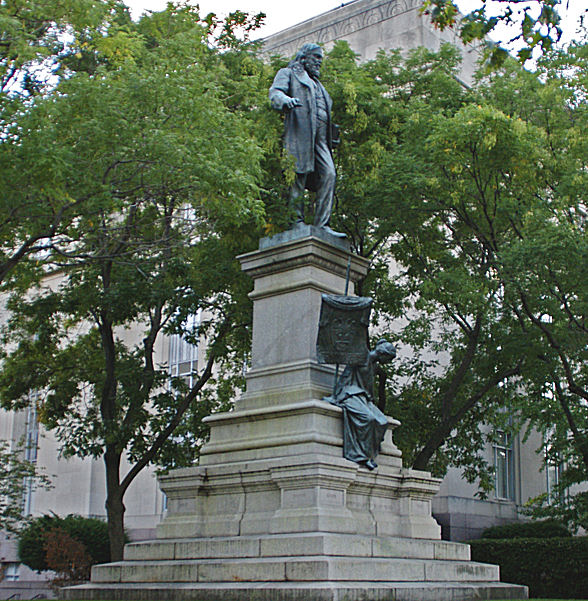 8. Who is Albert Pike? n.d. http://freemasonry.bcy.ca/biography/pike_a/albert_pike_bio.html.