Order of Knights of the Red Cross of Constantine 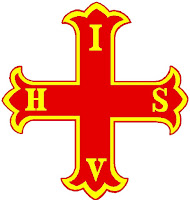 I am honored to say tonight I was approached by the Eminent Commander of my Templar Commandery and told that I have been elected to join St. Michael's Conclave, Red Cross of Constantine. I will go through the initiatory ceremony at the end of May, and I can't wait. here is some background to the Order.

The purpose of the Constantinian Orders are to commemorate the first elevation of Christianity from the position of a despised and proscribed heresy to that of a legally recognized and honored religion, to cultivate the social virtues, appeal to the intellectual and moral qualities, preserve as far as possible the customs of the fraternity and bring about good fellowship and understanding between all branches of Masonry.

Knights Companions, the title for members, of the Order meet in Conclaves of the Red Cross of Constantine and a member must be a Royal Arch Mason in good standing and subscribe to a belief in the Christian religion as revealed in the New Testament. Membership is by invitation and each Conclave has a prescribed membership limit.

In the June 2011 edition of the Knights Templar magazine, Jim Herndon, a Past Grand Sovereign from Idaho discusses the history of the Order:

The early history of the RCC contains a mixture of fact and legend. The Constantinian Orders are the most ancient of all the chivalric orders and degrees and have a legendary history extending back to the early days of the Christian era, even before the Crusades. This most ancient chivalric order of military fraternities owes it origin to a celestial vision. Constantine the Great found the Order of the Red Cross as a memorial to the divine miracle which brought about his conversion to the Christian faith. The Red Cross degree traditionally recites the circumstances attending the conversion of Constantine to the Christian faith and his vision of the cross in the heavens inscripted “IN HOC SIGNO VINCES.” It is said that on October 27, 312, Constantine received his vision, and the next day he was victorious. In 313, Constantine’s Order of the Knights of the Red Cross received whole-hearted recognition.

In 1692, Abbe Giustiniani, antachee introduced the Orders of the Red Cross into England. In 1760 the Grand Masters of the English and Scottish Knights or the Red Cross of Rome assembled in London and adopted as a requirement for knighthood that the applicant must be a Royal Arch Mason and a Christian. Judge Wallor Rodwell Wright was installed Provisional Grand Sovereign in 1804. A Grand Imperial Council of England was organized and on March 13, 1809, asserted sovereignty throughout Europe and America.