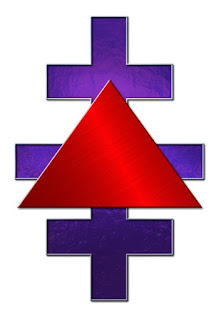 Again delving into the honorary and invitational bodies of the American York Rite, I will address the order known as the Holy Royal Arch Knight Templar Priests (HRAKTP) and its history. Try saying that ten times.

It is important to note that one should not confuse this body with that of the Templar Cleric orders established by Von Starck that existed in the late 18th century.

The Holy Royal Arch Knight Templar Priests is an invitational body with membership limitations. This order exists to recognize Past Commanders of Commanderies of Knights Templar who made great contributions to Masonic Templary, to their country, and to their community or society in general. Although many groups make this claim, it is one of the highest honors one can receive in York Rite Masonry.

Tabernacles are composed of no more than 33 members plus up to 16 Emeritus members.  These Tabernacles are led by the following officers: Preceptor, Deputy Preceptor, Seven Pillars, Chaplain, Registrar/ Treasurer, Inner Guard, and Outer Guard. The Grand College of America exercises authority over the constituent Tabernacles and their officers follow the same pattern. The number of Tabernacles permitted in each state is dependent upon the number of chartered Knight Templar Commanderies. Originally, this body conferred 33 degrees, but now only one is conferred in a Tabernacle. The degrees are:

From the August 2011 edition of the Knights Templar magazine:

Our title of Knight Priest is significant and descriptive and is borne with great pride by our members. We feel it recognizes that first, we are Knights, and our origin and allegiance are clearly with the Grand Encampment. In addition, as was true with the Templars of old, we are Priests committed to the priestly role of preserving and promoting the Christian religion. Dedication to Jesus Christ our Savior and Lord must always be the guiding principles of our lives. Although not ordained as professional ministers, our challenge is to minister within Freemasonry, especially in Templary.

The exact date of appearance for this Order is not known, but probably started between 1770 and 1780.  What we know is that it first appeared in Ireland and then in Bristol. It existed along the East Coast of England and Scotland, but it wasn't until landing in Newcastle did it survive under the formation of the Illustrious Order of Knights Grand Cross of the Holy Temple of Jerusalem.  In the 1820s and 1830s, this system was virtually unknown outside of Newcastle

In the following decades attempts were made to revive this in certain regions of England, but they died out very quickly.  By the end of the 19th century, this system controlled a number of degrees, believed to be around forty degrees, probably picked up after the union of the Grand Lodges in England. Some are recorded to have been the Order of the Red Cross of Babylon, Royal Arch, Royal Master, Select Master, and Super Excellent Masters. Later many of these degrees would fall from this system and be founded under different banners or today can only be found in the US. As this system was fledgling it seemed to confer these degrees without any central authority.  Also among these numerous degrees was the Order of the Holy Royal Arch Knight Templar Priests or also known as Order of Holy Wisdom.

On January 1st, 1897, an agreement was made which placed the Order of Knight Templar Priests (and surviving degrees attached to this system) under the authority of the Grand Council of the Allied Masonic Degrees, but allowed the Tabernacle in Newcastle to confer the rank of Knight Grand Cross of the Holy Temple of Jerusalem, a privilege that it still has today.

By 1920, Colonel Napier-Clavering became Grand Master of the Grand Council of the Allied Masonic Degrees and, through his recommendations, a Grand College for England, Wales, and the Colonies and Dependencies of the British Grown of the Holy Royal Arch Knight Templar Priests was established in the May of either 1923 or 1924 (the exact date is uncertain).

The first appearance of this order in the United States goes back to 1829 in Rhode Island. Between 1840 and 1931 there were five Tabernacles established, but none of them remained active very long.  This history begins with two meetings of the Order of the High Priesthood which took place on February 21st and February 25th, 1829. There are other references to this order with connection to the Scottish Rite, but by 1887 there appeared to be very little activity recorded. In October 1931, three North Carolinians were admitted into the Order by Sidney Clifton Bingham of Christchurch, NZ, who not having any news from the British Grand College cited from the Constitution that in the case of emergencies his actions were permitted, to include issuing warrants constituting three Tabernacles in North Carolina.

On May 14th, 1933, the Preceptors of these three Tabernacles met at a convention in Raleigh and agreed to form a sovereign body which they did on the 27th of the same month.  The name of this original order was the Great Priory of America, Priestly Order of the Temple. In 1934, these Knight Priests discovered that the Order was not extinct in England and to ensure the recognition of their Order a delegation was sent to England in 1935. John Edward Allen, the Grand Preceptor of the American order, was received on August 16th, 1935 by the Royal Kent Tabernacle. On his return to the United States, he re-consecrated the existing Tabernacles using the English ritual and on the 27th of October, he qualified all members of the previously organized Tabernacles.

In 1936, at an Annual meeting, the English Patent could be viewed and explained.  The Great Priory adopted the similar title of Grand College of the Order of Holy Royal Arch Knight Templar Priests or Order of Holy Wisdom.

Today the Order is composed of over 2,600 Knight Priests and 75 Tabernacles in the US, the Ontario Province of Canada, the Philippines, Portugal, and Italy.