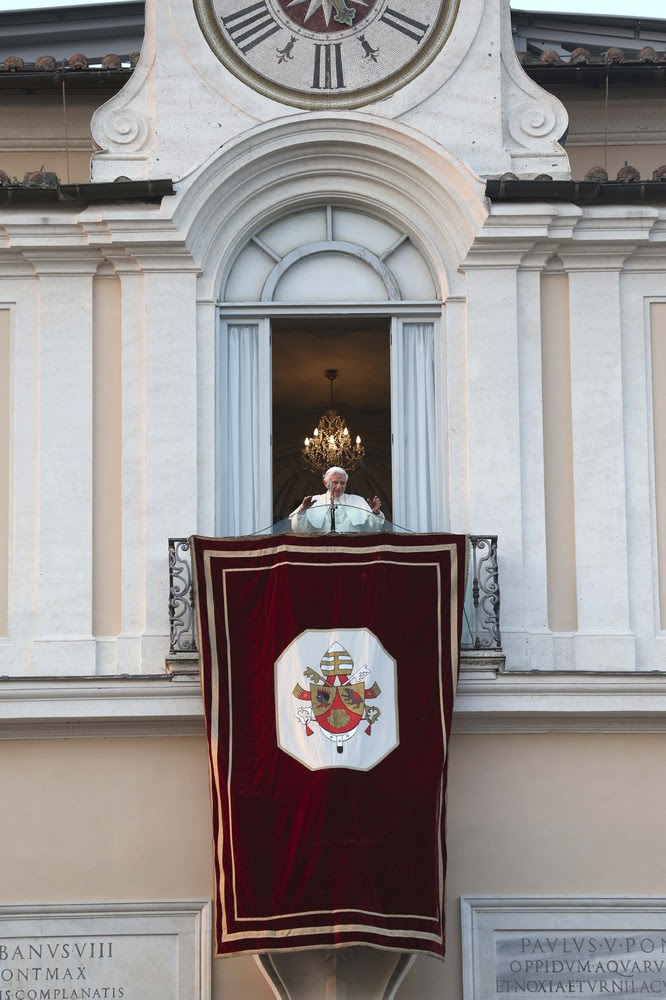 Whether you are Catholic or not (as I am), this day is a historic day. Today marks the last day for Pope Benedict XVI as he has resigned (something not seen in 600-years).

Nicole Winfield, a reporter for AP, has reported the following:

CASTEL GANDOLFO, Italy (AP) — Pope Benedict XVI has greeted the faithful for the last time as pope, telling well-wishers gathered at the Vatican's vacation retreat that he is beginning the final stage of his life as a "simple pilgrim," hours before he becomes the first pontiff in 600 years to resign.

Benedict arrived at Castel Gandolfo after an emotional sendoff from the Vatican, where his closest aide wept by his side as he bade farewell to Vatican officials gathered in the courtyard of the Apostolic Palace, Swiss Guards standing by at attention.

Bells tolled as he left the Vatican by helicopter and did a fly-by around St. Peter's Square. They tolled anew as he arrived in Castel Gandolfo, where the central piazza was jammed with people eager to capture the historic moment.

Once he arrived at Gandolfo, he addressed the crowd:

Dear friends, I'm happy to be with you, surrounded by the beauty of creation and your well-wishes which do me such good. Thank you for your friendship, and your affection. You know this day is different for me than the preceding ones: I am no longer the Supreme Pontiff of the Catholic Church, or I will be until 8 o'clock this evening and then no more.

I am simply a pilgrim beginning the last leg of his pilgrimage on this Earth. But I would still ... thank you ... I would still with my heart, with my love, with my prayers, with my reflection, and with all my inner strength, like to work for the common good and the good of the church and of humanity. I feel very supported by your sympathy.

Let us go forward with the Lord for the good of the church and the world. Thank you, I now wholeheartedly impart my blessing. Blessed be God Almighty, Father, Son and Holy Spirit. Good night! Thank you all!"

He turned and went inside the villa, never to be seen again as Pope.

At 2:00PM (Eastern time) the Papacy will be officially vacant and two Swiss Guards that ceremonially watch over the summer villa will march away and not return until the new Pope takes possession of the hilltop residence. At this time his Papal ring, the Ring of the Fisherman, will be destroyed in a solemn ceremony, which for this resigned Pope will symbolize the end of his authority as the Vicar of Jesus Christ, Successor of the Prince of the Apostles, Supreme Pontiff of the Universal Church, Primate of Italy, Archbishop and Metropolitan of the Roman Province, Sovereign of the State of Vatican City, Servant of the Servants of God, and Bishop of Rome. During this leaderless time (sede vacante), the Camerlengo serves as acting head of State of the Vatican City. He is not, however, currently responsible for the government of the Catholic Church during this time; the College of Cardinals has limited authority over the government of the church during the Papal vacancy.

Benedict will stay at Gandolfo until April when renovations should be completed on a convent in the Vatican that will be his new home.

One of Benedict's last acts was to give the College of Cardinals authority to meet sooner than March 15th, which would have been required under the old rules. It is thought that we could see the next Pope before mid-month. Well, may God guide these men to select the proper man to lead the Catholic Church out of this tumultuous time.
Posted by Barry at 11:30:00 AM