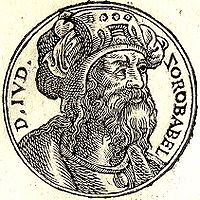 As he is not involved with the first building of King Solomon's Temple, Zerubbabel is not portrayed in the Craft or Symbolic degrees of the Blue Lodge although in several appendant orders he is an important figure. He makes his first appearance in the degrees relating to the Jews returning to Jerusalem from Babylonian captivity and the story surrounding the rebuilding of the Second Temple, both in the degrees under the Royal Arch Masonry and Scottish Rite Masonry.

Zerubbabel, the Prince of Judah, is according to the Bible the grandson of King Jehoiachin (also referred to as Jehoiakim or Jeconiah) who was deposed by Nebuchadnezzar and resulted in the Jewish captivity in Babylon which would eventually be conquered by the Persian Empire. During the reign of King Cyrus, the Jews were allowed, by decree, to return to Jerusalem and rebuild the city and Holy Temple. Many sacred items and vessels were returned to the Jewish people that had been taken by Nebuchadnezzar.

Their journey home was not an easy one for even though they had a royal decree allowing them back; the enemies of the Jews still fell upon them and hindered their progress. They make it back to Jerusalem after months of long marches which resulted in their arrival to Jerusalem on the 22nd of June, circa 535 BC.

Once rested, the Jews convene a Council which was presided over by Zerubbabel as King, Jeshua as High Priest, and Haggai as Scribe. Here plans were drawn up as to how to commence with the rebuilding of the Temple which is decided to build upon the ruins of King Solomon's Temple. This story sets the stage for the Royal Arch degree and as one is conducted through this degree he learns that it was necessary to remove the rubbish of the old Temple before they could lay the foundation of the new. During this clearing important discoveries are made.

Once the building is commenced, it didn't go smoothly. Samaritans attempted to join in, but are refused. In return for such an action, they with the other enemies ran a campaign of harassment and obstruction as they saw the Jews as a threat. In Freemasonry we symbolize these builders with the "Sword and Trowel" as they must be both ready to build and ready to defend, as we all must be while we face the trials of life.

When Cyrus died, his son Cambyses, fed by enemy propaganda, ordered the work stopped and the work would not restart until the 2nd year of the reign of Darius, who was a youthful friend of Zerubbabel. Zerubbabel departed Jerusalem to meet with Darius, but was arrested as a spy and taken to Babylon before the Court.

The story goes that at a feast was held were King Darius posed a question as to whether, wine, women, or the King were strongest. Answers were given as to why each was more powerful than the other two. Zerubbabel made a statement in defense of Truth being greater than all things and displayed such wisdom that he won over King Darius and earned his favor. Zerubbabel was able to secure another decree allowing the continuation of the Temple in Jerusalem. After 20-years since its commencement, the Temple was completed and dedicated, although Zerubbabel is not named in Biblical texts as being present. It is not known how he died, but some speculate that he may have been executed by the Persian court, but there is no concrete fact to support this.

Many speculate as to the origins of the name "Zerubbabel". Some say it could be a contraction of two Hebrew or Assyrian words that means "one sown of or conceived in Babylon". Now it is wondered as to whether or not Zerubbabel is the same person with the Babylonian name "Sheshbazzar" identified in Ezra 1:8 as the "Prince of Judah" and who also held the same title of Governor of Judah. Some believe though that Sheshbazzar was Zerubbabel's uncle.

It is interesting to note that when a Chapter of Royal Arch Masons is opened it is dedicated to Zerubbabel. Jeshua was the High Priest in the time of Zerubbabel and the presiding officer of a Chapter of Royal Arch Masons is known as the High Priest to commemorate the legend of the rebuilding of the Second Temple. Zerubbabel is illustrated in the Chapter as the second-in-command known as the King, although there is no evidence that he actually ever took that title even though it is said he is of the Davidic lineage.

Zerubbabel plays a part in the Royal Arch degree, Illustrious Order of the Red Cross, Order of the Knight Masons, and the 15° and 16° of the Ancient & Accepted Scottish Rite. Zerubbabel, like that Illustrious Martyr of the Symbolic Lodge, is a figure representing Truth and Fidelity. Let us remember the lessons exemplified by this legendary figure.