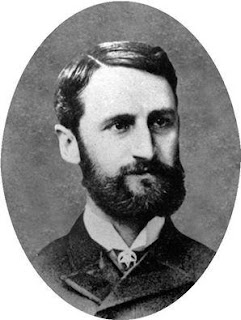 Next to the Five Friends & Brothers, Stephen Alonzo Jackson is regarded as one of the most important men in the history of the Kappa Sigma fraternity. It was by his efforts that a local chapter at the University of Virginia would expand to the strong international organization it is today, and it was because of his devotion that he was given the nickname "the Golden-Hearted Virginian." Stephen Alonzo Jackson was born on September 22, 1851, in Glenville, VA, the son of Minter Jackson and Mary Katherin Jackson. While still in his infancy, Jackson's mother died and he was raised by his grandmother.

Jackson was initiated into the Kappa Sigma fraternity in the Fall of 1872 while at the University of Virginia where he studied Latin, Greek, and Mathematics. Through the dedication of Jackson, the fraternity spread to Trinity College (now Duke University), the University of Maryland, and to Washington & Lee University. Jackson would go on to serve as Grand Master of Zeta Chapter, revise the ritual of Kappa Sigma, create the first Supreme Executive Committee (the governing body of the fraternity), establish a Constitution of the order, and the idea of a regular meeting of a national convention. He would go on to serve as the first Worthy Grand Master.

At the second Grand Conclave on November 1, 1878, at the Exchange Hotel in Richmond, VA, Jackson was re-elected as Worthy Grand Master and during his speech gave what is known as the "Apples of Gold" speech wherein he expressed his goals of an enduring brotherhood:

"Why not, my Brothers, since we of today live and cherish the principles of the Kappa Sigma Fraternity, throw such a halo around those principles that they may be handed down as a precious heirloom to ages yet unborn? Why not put our apples of gold in pictures of silver? May we not rest contentedly until the Star and Crescent is the pride of every college and university in the land!"

Stephen Alonzo Jackson passed away on March 4, 1892, in Washington County, VA, leaving behind his widow, Mary Cloyd Davidson. His legacy is unprecedented as it was through his through his efforts that the first southern fraternity expanded to the north and the establishment of a Greek fraternity Grand Conclave. Kappa Sigma has continued to grow with more than 200,000 living members (including over 20,000 undergraduate members) and 320 chapters and colonies throughout the United States of America and Canada.

1. About Us. (n.d.). Retrieved from Nu Chapter of the Kappa Sigma Fraternity: http://wmpeople.wm.edu/site/page/kappasigma/aboutus