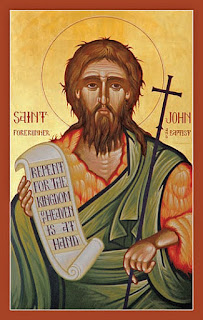 Today is St. John the Baptists's Day, a festival day celebrated around the summer solstice. In Freemasonry, this day should used to renew and strengthen the ties between Brothers. This day falls on or near the Summer Solstice where the sun is at its zenith marking the shortest night of the year and the start of summer.

John the Baptist belonged to the Jewish tribe of Levi. His father was a Temple priest named Zechariah and his mother was named Elizabeth, who was cousin to the Virgin Mary. John the Baptist was born six months before Jesus Christ, and he died about 6 months before Jesus. As he would later do with the Virgin Mary, the archangel Gabriel announced to Elizabeth the coming of her son, John. John lived in the mountains between Jerusalem and the Dead Sea. John was a very religious man who had his own ministry. His ministry became so popular many began to wonder if he was the Messiah prophesied, but John declared Jesus the "Lamb of God" and when he baptized Jesus Christ, he told his disciples to follow the Nazarene. After the Baptism of the Christ, these two never met again on Earth. John was murdered by King Herod after he had criticized their sinful lives. John was imprisoned before being beheaded. When Jesus was informed of the Baptist's death he responded by saying, "John was a lamp that burned and gave Light, and you chose for a time to enjoy his Light." The Baptist is best remembered for his baptism of Christ and his zealous virtue in keeping God's laws. In some sects of Christianity, John the Baptist is sometimes referred to as the Precursor or Forerunner.

This day is the feast day for St. John not because he died on this date, as is the norm, but because this day was said to be his birthday. He was said to have been born 6-months prior to the coming of Jesus Christ; as Christ's birthday is near the Winter Solstice, this would place the Baptist's birthday near the Summer Solstice. It is claimed that during the rise of Christianity and the conversion of so many Roman pagans that pagan holidays were converted into Christian holidays where Saints were remembered that previously worshiped pagan gods and goddesses. With this theory it is argued that St. John the Baptist was not born on or near the Summer Solstice, but was just another example of the Christianization of pagan solstice festivals.

To some, this day is called "Setting of the Watch" where bonfires are lit at sunset and people would jump through the bonfires for good luck and some considered the fires to be a purifying and cleansing agent (remember, "the night is dark and full of terrors"). Some across Europe celebrate this holiday by wearing crowns of wild flowers, oak wreaths, and so on. All in all, the various celebratory ceremonies and rituals were used to celebrate the cycles of life and death. To our friends and Brothers, the sun at the heart of worship and considered the greatest power; by it the world was illuminated and heated; by it they were capable of observing the passage of time each and the changing of the seasons through the year; by it nourishing crops were grown. The ancient worship of the sun evolved into the personification of the sun in the form of sun gods

In Freemasonry it is strange that that the Holy Saints John were selected as the Patron Saints of Freemasonry rather than St. Thomas who is considered the Patron Saint of Masonry. Masonic scholars state that these two were selected as St. John the Baptist represented the faith and zeal that should actuate every Mason while the Evangelist represent how our passions and actions should be tempered through reason and knowledge. Take together they represent the path towards enlightenment. In the Ahiman Rezon, the Constitution of the Antients it states, "the stern integrity of Saint John the Baptist, which induced him to forego every minor consideration in discharging the obligations he owed to God; the unshaken firmness with which he met martyrdom rather than betray his duty to his Master; his steady reproval of vice, and continued preaching of repentance and virtue. make him a fit patron of the Masonic institution."

This day and the Holy Saints John also remind us of the Masonic symbol the Point Within the Circle which represents the two saints on either side of a circle representing their place at each of the sun's orbit; two milestones in the astronomical year. This symbol is powerful and much more will be explained in a future article. For the present, it is necessary that this symbol is introduced in the Entered Apprentice degree and Masons are reminded to study astronomy (one of the 7 liberal arts and science) in the Fellow Craft degree. It was through the study of the movement of the heavenly bodies that man was capable of understanding the habits of animals, best farming and harvest practices, even opportune times for warfare, and, finally, the creation of a calendar system.

I see very few Lodges celebrating this day and I find that tragic. This day is one to forge our bonds not with our present Brethren, but also with those have walked this world before us. This day is also important to Freemasonry as the first Grand Lodge was formed in London on this day in 1717. Brothers, let us keep to celebrating this day and strengthening the chain of union of this venerable fraternity.

4. Point Within A Circle. (n.d.). Retrieved from Masonic Lodge of Education: http://www.masonic-lodge-of-education.com/point-within-a-circle.html

7. Stewart, G. (2010). The Holy Saints John – Duality in the Construct of One. Retrieved from Freemason Information: http://freemasoninformation.com/masonic-education/esoterica/the-holy-saints-john-duality-in-the-construct-of-one/