I came to the realization today that I have been a member of the Masonic Society for 5-years now (as of April). I joined while deployed in Iraq to have access to their forum and to their excellent journal. It wasn't until 2014 that I was able to attend their annual meeting and dinner at Masonic Week (called a First Circle gathering), but I look forward to it each year. 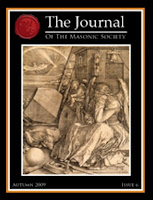 The Journal of the Masonic Society doesn't just include articles on the history of Freemasonry, but also includes articles that explore the challenges facing Freemasonry now and what is on the horizon. The article has included pieces by well known Brothers and was for a time edited by Bro. Chris Hodapp.

The Annual First Circle gathering is held at Masonic Week each year, but other First Circle gatherings may be held in the form of symposiums or conferences. Masonic Society members may hold local, state, or regional meetings which are referred to as Second Circles. For those Master Masons who are desirous of furthering their Masonic education and wish to perform their own research should join the Masonic Society.
Posted by Barry at 4:00:00 AM