Sacred Alignment: The Peculiar Arrangement of the Streets of Boise

The orientation of the downtown grid in Boise, as platted by Henry C. Riggs, has perplexed me since I first noticed it. It seemed to be askew at a very peculiar angle, and to me the orientation seemed intentional. I asked around the historical community, and nobody seemed to think it strange or intentional at all, until I started asking around in the surveying community. Jack Clark, PLS was the individual who stated that everything about the arrangement of the City of Boise was Masonic. His work with the Ada County Assessor’s office, his term on the Ada County Historic Preservation Council, and the fact that he is a Licensed Professional Land Surveyor, lend considerable credibility to his assessment of the layout of the City of Boise. He explained that he thought the Capitol being centered on what would be 7th Street was significant. He also said the named streets (which run East-West within the askew grid) were aligned to the Solstices. This was an exciting revelation, and it seemed very plausible as there are numerous sacred sites that have alignments marking the solstices or equinoxes. I had visited the Temple of Kukulcan at the Mayan site of Chichen Itza in 2011, and listened intently at the explanation given for the various aspects of the pyramid, which make it an astronomical calendar. On the Spring and Autumn Equinoxes, it is aligned so that the shadows created give the appearance of a serpent crawling down the steps of the pyramid. This was quite an impressive feat, but probably elementary for a culture so focused on Astronomy and Geometry. Nevertheless, I forgot about this revelation until the calendar neared the middle of June this year (2016). I started looking for programs that might show sunrise and sunset locations throughout the year, so I could verify if there were in fact any odd alignments on the Solstice in Boise. Being an Electrical Engineer myself, and being focused very specifically on Solar Photovoltaic design, I frequently use such programs to estimate the production of a Solar Photovoltaic array that is at a fixed tilt and oriented in a specific direction. It suddenly occurred to me that I had never really paid much attention to the location of the sun at the beginning or the end of the day, since there is no power production occurring at these times. So I found a program called SunCalc, which is available online for free, and checked the sunrise location on June 24, and was immediately disappointed. I had to adjust some of the settings to see the location of the sunset, and there it was – the sunset in near perfect alignment to the adjusted West of the downtown grid. So on the evening of June 23, I packed my wife and 4 kids into the minivan and headed downtown with my camera. The sun didn’t set until around 9:30pm, and I arrived at 9pm. The sun was still looking like it was due West, and my hopes sank, thinking that it would never make it to the alignment of the grid. But the position changed drastically as 9:30 drew closer, and from the center of the street, I could see the sun moving into the street. The trees at the end of the street obscured its final position, but the fact that it made it all the way to the street prior to sunset was absolutely amazing to me. Below is a snapshot of the sunset taken just prior to sunset from 5th and Bannock. WB Levi Billman suggested a rigging system to capture the sunset from the center of the street that would allow a much clearer photograph not obscured by the trees at the end of the street(s). Next year, perhaps we will attempt a photograph from a better vantage point.

In Idaho City (Bannock City at the time), with the recommendation of Wasco Lodge No. 15 in The Dalles, Oregon, the Grand Master of Oregon granted dispensation to Idaho Lodge No. 35. This lodge was located in what was then known as Bannock City, which later became Idaho City. The lodge would later become Idaho Lodge No. 1, which was chartered by the newly formed Grand Lodge of Idaho, Ancient Free and Accepted Masons, on 23 June 1868.

In Boise City, eight men assembled in Thomas Davis and William R. Ritchie’s cabin. One of them was Henry Chiles Riggs, Sr., who drew up the first plat of Boise City that evening. The history of the men involved in this venture is well written, and does not need to be restated here. The history does, however, need to be properly adorned to paint a fuller picture of who these men really were, and what it was they set out to do on that day. Thomas Davis came from Ohio, near Cincinnati. He came to Idaho with his brother Frank in 1862. From the Grand Lodge of Ohio, we learn that he was Raised in Carroll Lodge No. 124 on April 15, 1859, and took his Dimit on March 14, 1862. 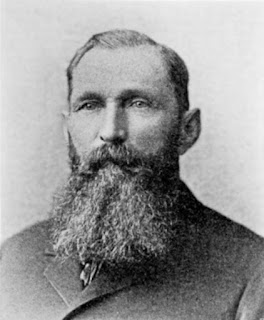 Henry Chiles Riggs, Sr., is well recorded in the history of Idaho, however, his Masonic affiliation does not show up anywhere. The Grand Lodge of Idaho assisted me in finding his affiliation with Shoshone Lodge No. 7. In 1869, in the Grand Lodge Proceedings for Idaho, his name appears on the first roster among the list of Master Masons for Shoshone Lodge U.D. From that point, I was able to track him down to Yolo Lodge No. 81 in Yolo County, California. He appears among the list of Master Masons in the 1858 Proceedings of the Grand Lodge of California for that lodge. He was also involved in Idaho Masonry as early as 1865, as he is listed as part of the Committee of Invitation in Boise City for the Masonic Ball for Idaho Lodge No. 35. I have not yet tracked down where he was Initiated, Passed and Raised, but for now, it was sufficient to learn that he was a Master Mason, and active in Masonry in Idaho.

From the Idaho State Historical Series for Henry Chiles Riggs, Sr., we also learn that he was elected as a Representative to the Idaho Territory Legislature, and introduced Bills to remove the Capitol from Lewiston to Boise City, and also to form a new County around Boise City. Both of these Bills were successful, and the Capitol moved to Boise, and the new County formed was named Ada County for his daughter, Ada. Much more has been written about his life and his many accomplishments, and it is abundantly clear that he was a great asset to the community of Boise City. 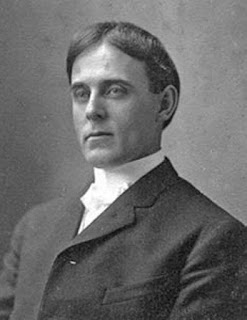 John E Tourtellotte weighs in heavily on this story, as some of the most significant Architectural elements that permeate the landscape in Boise are attributed to his brilliant efforts. There is a great deal of information that has been written about this man, but nothing that would lead anyone to believe that he was a member of our ancient and honorable fraternity. He wasn’t easy to find, but I was finally able to locate his record (with some assistance from our Grand Secretary) in the archives of the Grand Lodge of Idaho. His record indicates that he was Raised in Boise Lodge No. 2 on May 7, 1892.

His career was very impressive, and there are many buildings in the City of Boise that are attributed to him. He commenced work on the Cathedral of St. John the Evangelist in 1906, and construction was finally completed in 1921. His work on the Capitol Building commenced in 1905, and was completed in 1920. It seems interesting to note that Bro. John E. Tourtellotte and Bro. Hon. Henry C. Riggs, Sr. would have been active in Boise lodges at the same time. It would be fantastic to learn if there were ever any conversations relative to the arrangement of the grid, or the original intentions of the creator of that first plat map. Regardless, we find the front entrance of the Cathedral of St. John the Evangelist, with it’s most prominent stained glass window and a statue of St. John the Evangelist perched atop that façade, on the Feast Day of St. John the Evangelist, aligned perfectly to greet the sunrise. Was Bro. John E. Tourtellotte aware of this sacred alignment or was this all just a complete accident? The Capitol Building is even more interesting for our Fraternity. It has 33 steps leading to the entrance. From the front of the Capitol Building, the Capitol Dome is illuminated precisely halfway at sunset on June 24, and again on Sunrise on December 27. It contains 3 different types of columns – Doric, Ionic, and Corinthian. And finally, the words of Bro. John E. Tourtellotte from his Capitol dedication speech: “The great white light of conscience must be allowed to shine and by its interior illumination make clear the path of duty.”

In the midst of all this construction, there is one more element that I believe further punctuates the efforts of these good brethren, and that is the Union Pacific Depot. Architects Thomas Hastings and Richard Shreve commenced plans in 1924, and construction was completed in 1925 to much fanfare. There is no mention of either of these Architects being Masons, but as we have already seen, this isn’t conclusive evidence that they weren’t. The siting of the Depot tower is precisely aligned to the center of the Capitol Building intentionally to create a spectacular boulevard in the style of the City Beautiful movement. There are many interesting elements to the Tower, including four obelisks at each corner near the top of the tower. The interior has interesting details that might lead a person to believe that there was some Masonic influence on this impressive structure, and hopefully time, perseverance and patience will reveal the connection if one exists.


In the image below taken from the SunCalc program for June 24, the red line marks the direction of the sunset on June 24, and shows a very close alignment to the adjusted “West” according to the downtown grid as platted by Henry C. Riggs on July 7, 1863. The Capitol Building designed by Architect John E. Tourtellotte makes good use of shadow on this evening, when the dome is precisely split in the center from the front view with shade on the right and light on the left. 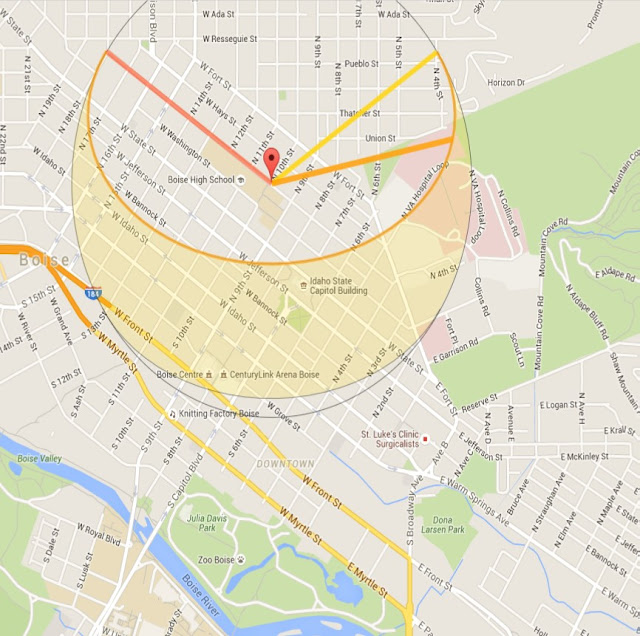 In the image below taken from the SunCalc program for December 27, the orange line marks the direction of the sunrise on December 27, and shows a very close alignment to the adjusted “East” according to the downtown grid as platted by Henry C. Riggs on July 7, 1863. The Cathedral of St. John the Evangelist, has it’s entrance oriented to this corrected East and was designed by Architect John E. Tourtellotte. The Capitol Building, also designed by Architect John E. Tourtellotte, makes good use of shadow on this morning, when the dome is precisely split in the center from the front view with shade on the left and light on the right. 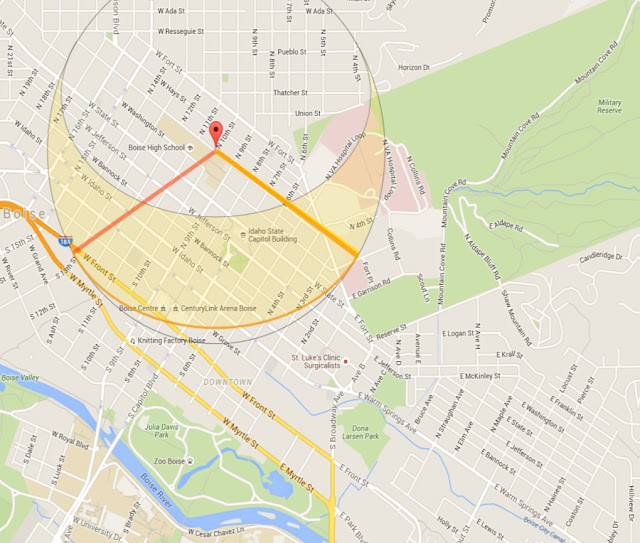 Bro. Christopher Williams was Raised to the Sublime Degree of Master Mason in Idaho Lodge No. 1, Ancient Free & Accepted Masons of Idaho, where he currently serves as Worshipful Master. He is also a member of Idaho City Historical Lodge No. 1863 in Idaho City.