150th Annual Communication of the Grand Lodge AF&AM of Idaho 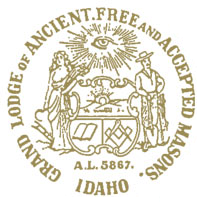 Thursday night, the Idaho Lodge of Research No.1965 met where I was re-elected as Secretary. Friday was a long day of committee reports, but ended with the Grand Banquet where there was plenty of good food, good fellowship, and the dispensing of awards to several deserving Brothers. Congratulations to those Brothers who were awarded Mason of the Year and District Masons of the Year.

This morning dealt with the passage of resolutions proposed by the voting members and delegates of the Grand Lodge. The ones that interested me were three: 1) The Brethren approved the ability for Lodges to hold election of officers on any degree when previously it could only be done on the Master Mason degree; 2) The Brethren approved the request to allow a Forest of the Tall Cedars of Lebanon to be established in Idaho; and 3) the Brethren rejected the proposal that would have put a term limit of three consecutive years to the stations of  Worshipful Master, Senior Warden and Junior Warden.

Today, Brethren from all over the State of Idaho as well as several visiting Brothers congregated in Idaho City for the Annual Communication for Idaho City Historic Lodge No.1863. Prior to the meeting we had a picnic which was catered by a local BBQ company owned by Carlas Brown, Most Worshipful Past Grand Master of the Most Worshipful Prince Hall Grand Lodge of Oregon, Idaho, and Montana Inc. I had the honor of serving as Worshipful Master for this year for the Historic Lodge. After the usual business of a stated meeting, I gave a short talk on what our 19th century Brethren would have gone through in traveling to Idaho City to establish the Grand Lodge of Idaho:

Brothers, I want to take a moment to reflect how remarkable it was for our predecessors to come together to form the Grand Lodge of Idaho.

It took most of us 54-minutes to go from Boise to Idaho City, but the founders of our didn't have the modern conveniences we have today. No paved roads, no cars, and railroads didn't really develop in Idaho until between 1880 and 1890, and even then it serviced along the corridor similar to what I-84 occupies. Back in 1867, one had three choices for travel: the first is the least likely and that is to walk; the next was to ride a horse; and, lastly, the most common would have been to take a stagecoach.

Stage lines began to replace saddle trains in 1864 as soon as roads suitable for wagons were built. Stagecoaches were pulled by teams of horses or oxen. In comparison to riding in our modern automobiles with environmental controls, riding a stagecoach was not always fun. Passengers were often jammed together with few rest stops. Aside the slow and steady pace, passengers faced the harsh environmental conditions of Idaho summer and winter, bandits and robbers, and of course the lovely rattlesnake.

Stagecoaches could travel between 10 and 15-miles a day. Using modern roads, from Idaho city, Centerville is 11-miles, Placerville is 13-miles, Pioneerville is 17-miles, Boise is 40-miles, and Silver City is 109-miles away. The shortest travel time is a full day of travel and the farthest took between 7.5-days and 11-days. These measurements is with the assumption of good weather and road conditions which seems unlikely with the mountainous terrain. We have to remember that they came together during the month of December and the average snowfall for Idaho City can exceed 6-ft. Now take into account snow, ice, mud, and avalanches into those travel times and you can only imagine the fervency and zeal that drove these Brothers. Reflect on that Brothers.

I then turned the gavel over to the newly installed Most Worshipful Grand Master who closed the Lodge. Afterward I returned to Boise and had beer with my friend and Companion, David Grindle, the Most Puissant General Grand Master of the General Grand Council of Cryptic Masons International. Now it's time for bed and some rest.