Tarot Card of the Month: The Hermit 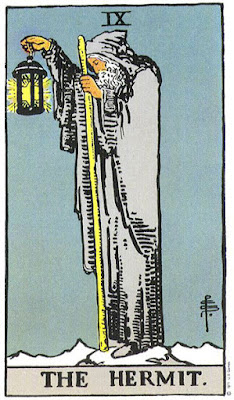 The Tarot card for this month is The Hermit. The Hermit can also be referred to as the Monk, Time, Sage, Cronus, or the Shaman. The Hermit is the 9th of the Major Arcana in Tarot. The Hermit symbolizes the planet Mercury, the element Earth, the zodiacal sign of Virgo, and the angel Metatron.

The Hermit represents meditation, introspection, wisdom, awareness, solitude, illumination, and spiritual enlightenment. The Hermit is a spiritual trailblazer of the highest order; that he has attained a higher level of spiritual knowledge and that he is ready to share his knowledge with those seeking it. When drawn, this Tarot card indicates that you have a 1need to step back and carefully examine your situation and decisions.

The Hermit reflects that you are engaging in a period of soul searching and honoring the wisdom found within. This Tarot card reminds me of Christ's conversation with the Pharisees when he says, "For, behold, the kingdom of God is within you." (Luke 17:21)

This Tarot card shows an old man with a long white beard, clad in grey robes, standing alone on top of a snow-clad mountain with a lantern in his right hand and a staff in the left. The old man symbolizes wisdom that comes with age. The cloak represents the ability to separate from the world. The mountains symbolize achievement, growth, and accomplishment. The snow represents the heights of spiritual attainment. The star in the lantern is a six-pointed star (sometimes known as Seal of Solomon) represents wisdom and knowledge. While the flame is contained in the lantern, the light shines symbolizing that it is meant to be shared with others and be used to guide us along our path. The staff in his left hand is said to be the Patriarch’s staff, a symbol of the narrow path of initiation and an emblem of power and authority. The Hermit is the 9th of the Major Arcana is associated with Virgo which is herself the epitome of a person at complete fulfillment alone and to themselves, while always pondering perfection.

The Hermit is an archetype described by Carl Jung. This archetype is shown as a wise old man, a philosopher, or a mentor. We've seen this archetype used with figures like Merlin in Arthurian legend, Gandalf in the Lord of the Rings series, Albus Dumbledore in the Harry Potter series, or even Odin in Norse mythology.

Email ThisBlogThis!Share to TwitterShare to FacebookShare to Pinterest
Labels: Tarot