The Words & Phrases series will be looking at terms that are sometimes used in Freemasonry but are not commonly used. As the Grand Lodge of Idaho just approved the resolution on recognition of the Societas Rosicruciana in Civitatibus Foederatis, I'll be starting with the term "college" which is the name given to the basic organizational unit of that order.

"College" is defined as a body of clergy living together and supported by a foundation, or a building used for an educational or religious purpose. The term "college" is rooted in the Latin word "collegium" meaning "community, society, or guild" and is used in the context of "a body of scholars and students." This definition and etymological root perfectly align with the purpose and mission of the Societas Rosicruciana in Civitatibus Foederatis and the York Rite College, as well, as both of those orders are dedicated to education and research.

The oldest known collegiate institution is the University of Karueein that was founded in 859 AD in Fez, Morocco. The oldest college in Europe is the University of Bologna in Italy and was founded in 1088. The oldest university in Germany is the University of Heidelberg which was founded in 1386 (during the lifetime of Christian Rosenkreutz, the founder of Rosicrucianism). An interesting note to see the correlation between the robes of college graduations and the attire for Chief Adepts or High Council officers (see the picture). According to Columbia University, the practice of gowns and hoods dates back to the 12th century when this regalia was worn by clergy, and their students adopted the same garb. For one thing, the gowns provided warmth in unheated buildings and served as a way to set the student apart from his fellow citizens. Knowing the religious roots of colleges and universities as well as the roots of Rosicrucianism, it is not surprising to see similar clothing. 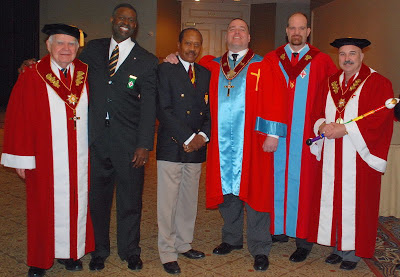