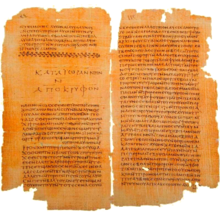 The Nag Hammadi Library is a collection of 13 books containing over 50 texts including a number of the Gnostic Gospels, the Corpus Hermeticum, and a partial translation of Plato's Republic. The most famous Nag Hammadi codex is the only known complete copy of the gospel of Thomas. These texts are dated between the 2nd and 3rd centuries AD, and were thought to have been destroyed during the early years of the Roman Catholic Church and their attempts to establish their orthodoxy. Some theorize that some early Christians tried to destroy these Gnostic writings because they contained secret teachings about Jesus and Christianity. Many Christians today decry the Nag Hammadi Library as heretical and forgeries "that espouse false doctrines about Jesus Christ, salvation, God, and every other crucial Christian truth."

This collection was discovered in December of 1945, but the translation wasn't completed until the 70s. They were found by a farmer named Muhammed al-Samman and his brother who found the documents in sealed jars that had been buried in the Jabal al-Ṭārif caves near the town of Hamrah Dom in upper Egypt. 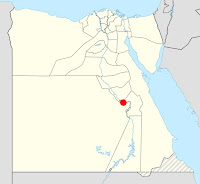 Some scholars believe that this collection had belonged to a nearby Pachomian monastery and were buried after Saint Athanasius condemned the use of non-canonical books in his Festal Letter of 367 A.D. The Nag Hammadi Library were originally written in the Coptic language and are currently housed in the Coptic Museum in Cairo, Egypt. They take their name from the nearest major city (12-km SW of Hamrah Dom).

When al-Samman took these manuscripts home, his mother burned some of them out of fear of their "dangerous effects." Their significance went unacknowledged for some time. It wasn't until 1948 when a Coptologist, Jean Doresse, at the Coptic Museum published a reference to them. The remaining documents found their way to the Egyptian Department of Antiquities which came from a Coptic Priest who had received them from the brothers. After the 1952 revolution, the Nag Hammadi Library was given over to the Coptic Museum in Cairo. One of the documents was sold out of Egypt and made its way into the hands of Carl Gustav Jung. After his death in 1961, there was quarrel over ownership, but by 1975 it had made its way to the Coptic Museum and finally reuniting the codices.

Here is a list of the documents of the Nag Hammadi Library:

The Gospel of Truth

The Treatise on the Resurrection

The Gospel of Thomas

The Gospel of Philip

The Hypostasis of the Archons

The Exegesis on the Soul

The Book of Thomas the Contender

The Sophia of Jesus Christ

The Dialogue of the Savior

The Apocalypse of Paul

The First Apocalypse of James

The Second Apocalypse of James

The Apocalypse of Adam

The Acts of Peter and the Twelve Apostles

The Concept of Our Great Power

The Discourse on the Eighth and Ninth (a Hermetic treatise)

The Prayer of Thanksgiving (a Hermetic prayer)

The Paraphrase of Shem

The Second Treatise of the Great Seth

The Teachings of Silvanus

The Three Steles of Seth

The Letter of Peter to Philip

The Thought of Norea

The Testimony of truth

The Interpretation of Knowledge

A Valentinian Exposition, On the Anointing, On Baptism and On the Eucharist

The Sentences of Sextus

1. McRae, M. (2018, April 15). Scholars Have Found a Rare Copy of Heretical Writings on Jesus And His 'Brother'. Retrieved from Science Alert: https://www.sciencealert.com/greek-first-apocalypse-james-nag-hammadi-library-teaching-tool

4. What is the Nag Hammadi library? (n.d.). Retrieved from Got Questions: https://www.gotquestions.org/Nag-Hammadi.html