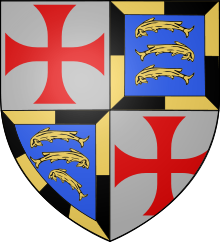 The next Grand Master, Guillaume de Chartres, was known as a chronicler as he created the most in-depth, codified records for the Templar order. His governance was during the Fifth Crusade and was considered a violent tenure.

The son of Milo IV, Count of Bar-sur-Seine, Guillaume de Chartres was born around 1178 in the Champagne, like several of his predecessors. While his exact age is unknown, he joined the Templars at a very young age at the Preceptory of Sours, located near Chartres; one source states that he joined at the age of 16. Little is known about his journey through the order.

He was elected as the 14th Grand Master at the beginning of 1210 and, in the same year, assisted in the coronation of Jean de Brienne as King of Jerusalem (although Saladin controlled Jerusalem since 1187). During his reign, the Templars flourished in Spain where they achieved important victories against the Moors during "Reconquista". Just as in France, lords and noblemen flocked to the Templar order and donated lands to them.

In 1217, Jean de Brienne (King of Jerusalem), Andre II (King of Hungary), and Pelage (the pontifical legate) began a campaign against Egypt which started at Damiette (NE side of the Nile Delta). Guillaume de Chartres spoke against it, but was obligated to follow. The siege of Damiette lasted 18-months and unsuccessful due to conflicts between the King of Jerusalem and the Pontifical Legate.

In an attempt to hold off Muslim reinforcements, Guillaume de Chartres led the Templars to battle. De Chartres died in front of Damiette on August 26, 1218, not from battle, but from a plague that had spread through the armies. He was succeeded by Peter de Montaigu.