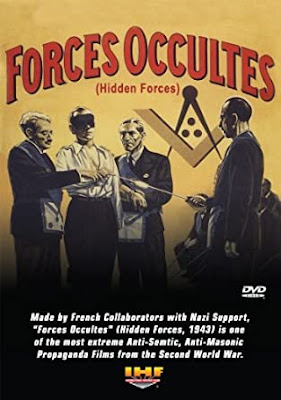 Continuing with the series of articles concerning the disinformation campaign of anti-Masons, this one will focus on the film "Forces Occultes – Au Coeur De La Franc-Maconnerie" or simply called "Occult Forces" in English. This film was an anti-Mason film produced in Nazi-controlled France in 1943. The film, lacking any foundation in reality, is used to push the Nazi's unjust attack on Judaism and justify their crimes against humanity.

The film centers on a young French politician who joins the Freemasons to help his career. Once he joins, he learns that the Freemasons are conspiring with Jews and Anglo-American nations to force France into war with Germany. The film was commissioned by the Propaganda-Abteilung Frankreich, an arm of Nazi Germany's propaganda ministry located in France. France had been invaded by the Nazis in 1940 and held control until the Allied Powers liberated them in 1944. The government of France fell under the authority of the German Reich during this time while it claimed the whole of France, it really only controlled northern and western France.

Jean-Marie Rivière, one of the writers, and Jean Mamy (under the pseudonym Paul Riche), the director, were both former Freemasons and who spearheaded this film. It is said that that Mamy had served as Venerable Master for Renan Lodge from 1931 to 1939 under the jurisdiction of the Grand Orient of France. It is important to note that the Grand Orient of France had lost recognition by the end of the 19th century after it abandoned the Ancient Landmarks that define Freemasonry. Today, the recognized Masonic body is known as the Grande Loge Nationale Française which conforms to the Ancient Landmarks.

Jean-Marie Rivière, was sentenced to death in absentia (he fled when the tides turned against the Nazis); Robert Muzard, the producer, was jailed; and Jean Mamy was executed on March 29, 1949, for supporting the Nazis during their occupation of France.

Sadly, this video is still used today by anti-Masons that we're nefarious, but these same people will usually deny the Holocaust and tout Hitler as either some kind of martyr or a tool of "International Jewry" and Freemasonry. Some will even go so far as to deny its connection to the Nazis. Beware Brothers of anti-Mason disinformation like this.