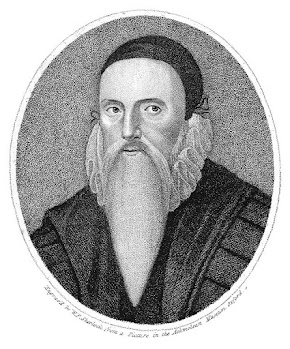 While there is no record that he was a Freemason, I find John Dee to be a fascinating character. Born amidst the political and religious turmoil of 16th century England, Dee would be known as a mathematician, alchemist, astrologer, geographer, occultist, possible Rosicrucian, and adviser as well as likely spymaster for Queen Elizabeth I. It is said that "Dee straddled the worlds of science and magic just as they were becoming distinguishable."

John Dee was born on July 13, 1527, in the Tower Ward of London, the only child of Rowland Dee, a minor courtier to King Henry VIII, and Jane (or Johanna) Wild. In 1535, he was educated at the Chelmsford Chantry School (now one of the locations of King Edward VI Grammar School) before he attended St. John's College (Cambridge) in 1542; he would go onto earn a Bachelors and Masters.

In 1546, he was one of the founding Fellows of Trinity College located in Cambridge. In 1548, he traveled to Continental Europe and studied at the University of Louvain. By 1550, he was in Paris giving lectures on Euclid and mathematics. He became friends with several scholars to include famed cartographer Gerardus Mercator.

In 1551, Dee traveled back to England where he devoted his studies to alchemy, divination, and Hermetic philosophy. In 1553, King Edward VI granted him the rectory of Upton-upon-Severn, Worcestershire. The next year he was offered a readership in mathematics at the University of Oxford, but turned it down. He also worked training navigators and promoted British imperialism through naval power; some believe he was the first to coin the term "British Empire."

In 1555, Dee became a member of the Worshipful Company of Mercers. For those unfamiliar, a mercer is defined as "a dealer in textile fabrics, especially silks, velvets, and other fine materials."

Later that year he was arrested on charges of casting spells against Queen Mary I. These charges would be expanded and included treason against the British Crown. He represented himself and was exonerated, but still had to meet with the Catholic Archbishop Bonner for his examination. Whatever was involved with this examination, Bonner and Dee became close associates.

After the death of Queen Mary in 1558, her half-sister Elizabeth ascended to the throne of England. She sent for John Dee and asked for his advice to calculate the best time for her coronation which occurred on January 15, 1559.

Dee would continue to serve as an adviser to Queen Elizabeth I and own a riverside house at Mortlake near London. At this residence he amassed the largest library in England for the time; he had over 4,000 books and manuscripts while the Oxford library only had less than 400 in its collection and Cambridge's 451 in theirs. While it was a private library, he made it accessible to scholars. He also built an alchemical laboratory to further his studies on the subject. His library was so impressive that the Queen herself traveled to Mortlake simply to see the library. Queen Elizabeth and other nobility would give their patronage to Dee, but he never achieved financial independence so it is assumed that his library was built through gifts from patrons.

In 1564, Dee wrote Monas Hieroglyphica (The Hieroglyphic Monad), an exhaustive Cabalistic and Hermetic tome on the interpretation of a glyph of his own design, meant to express the mystical unity of all creation. He dedicated the book to the Holy Roman Emperor in an effort to gain more patronage, but it didn't work.

In 1570, Dee wrote a new mathematical preface to Henry Billingsley's translation of Euclid. This preface introduced the public to the signs of addition (+), subtraction (-), multiplication (x), and division (÷).

In 1577, Dee published General and Rare Memorials which were about navigation and Dee's vision of a maritime empire. He believed that England could become an empire through this naval supremacy and advocated that they needed to colonize the lands of the New World. Some argue that Dee saw Elizabeth as a new Arthur with him as her Merlin and that a British Empire would be a new Atlantis as it colonized the New World. Some believe that Dee influenced Francis Drake’s circumnavigation of the globe.

Maybe it was the frustration with limited patronage as well as seeing the religious turmoil ripping through Europe, but Dee started seeking ways to communicate with angels. He wanted to find a way to heal the rift between Catholic and Protestant Christianity.

He hired a number of scryers and crystal-gazers to serve as an intermediary between Dee and the angels, but was unsuccessful or unsatisfactory. Then, in 1582, he met Edward Kelley (also known as Edward Talbot), a medium who was around 28-years his junior. Through Kelley, Dee had several conversations with angels and which resulted in the discovery of the Enochian or angelic language.

It was also around August 1582 that John Dee is said to have met Francis Bacon, who would be a philosopher, statesman, a possible Rosicrucian, and an accomplished author.

Starting in Fall 1583, in search of another royal patronage, Dee and Kelley traveled to Continental Europe. They first met with a Polish nobleman named Albert Laski who was the Count Palatine of Siradz. This endeavor failed as Laski was poor and out of favor with the Polish court. They traveled throughout Europe meeting with King Stefan of Poland and Emperor Rudolf II in Prague. While in Prague, Dee was made a Doctore of Medicine. 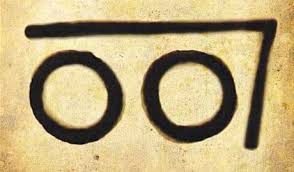 If it was not for his affiliation with Queen Elizabeth, he may have been given patronage by the Emperor, but they mistrusted him as they believed that he was a spy for England. It is said that he signed his letters 007 which inspired the James Bond books by Ian Fleming who used 007 as Bond's codename.

By 1586, Dee lost favor in the Holy Roman Empire and was banished due to condemnation by the Roman Catholic Church, but he took refuge with the Count of Bohemia where he resided for nearly 2-years. In 1587, the relationship between Kelley and Dee degraded after Kelley said that angels had ordered them to share their wives. Kelley would go on to serve as an alchemist for the Emperor, but would later be arrested for failing to make good on his promises. Kelley would die in February 1593 during an attempt to escape from prison.

In 1589, he returned to England and found his Mortlake home vandalized and looted. That year also saw a plague spread through London which took the life of his wife, Jane, and five of their children. He started back up his alchemical studies and experiments, but he never attained the Philosopher's Stone.

Around 1595/96, Dee was appointed by the Queen as Warden of Christ's College in Manchester. With the decline of Catholicism in England, this college had bee re-organized as a Protestant institution with a Royal charter in 1578. This turned out not to be good for Dee as he was constantly at odds with the other Fellows of the College who despised him. While he didn't resign from this position, he returned to London in 1605. By this time, Elizabeth had died and James I had taken the throne of England and Scotland who didn't give any support or protection to John Dee.

John Dee spent the final years of his life in poverty, even after he sold off many of his possessions to support him and his daughter, Katherine, who took care of him in the end. He died sometime between December 1608 and March 1609 in Mortlake. He is said to have been buried at the local Anglican church, but both the record and gravestone are missing today. Dee was survived by two of his sons and one daughter; he had been married three times and had eight children.