Well, another SRICF High Council is in the books. My College's Secretary and I toured distilleries on Thursday then met up with the Suffragan and had dinner at Repeal Steakhouse

Friday morning started with the procession and opening of the High Council by Most Worthy Frater, Jeffrey Nelson, IX°, KGC. After his allocution, he installed several new Chief Adepts. After lunch, the educational presentations for the day started:

Following a quick break, the Fratres were led in a Practicum Exercise.

Once the day's agenda was completed for the day, the Fratres wandered between three hospitality suites hosted by California College, Indiana College, and Alabama College. The Indiana College went and decorated their room with a Harry Potter theme. 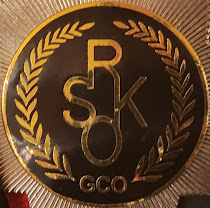 Before long, it was time for the Royal Society of Knights Occidental dinner, followed by the conferring of the VIII° and IX°. Congratulations to the newly elevated Right Worthy Fratres including Frater Rick Rowe who serves as Third Ancient of Idaho College. The VIII° was conferred by the Chief Adepts of Nebraska, Alabama, and Texas while the IX° was conferred by the Most Worthy Supreme Magus. The rest of the night was spent socializing with my fellow Fratres.

Saturday started with a quick bit of business, including installing a new Secretary-General and chartering new Colleges in Brazil. Once completed, the Supreme Magus turned the gavel over to the Junior Deputy Supreme Magus who is in charge of the educational presentations. Today there were four presentations for the High Council:

The Supreme Magus then had pre-recorded messages from the Supreme Magi of Scotland, England, and Portugal. It was mentioned in the messages that Frater Joaquim Pinto Coelho, the Supreme Magus in Portugal, is retiring after 20-years. Next year is also the Sesquicentennial of the High Council in Scotland.

One last bit of business before we closed is that the Supreme Magus had to install a new Secretary-General who also received the Knight Grand Cross at the banquet later that night.

Once the festivities were done, I got a bit of sleep before I flew back home through Atlanta airport. I even got home in time to watch the last few Pledges of the Kappa Rho Chapter get initiated and become Brothers of that fraternity!