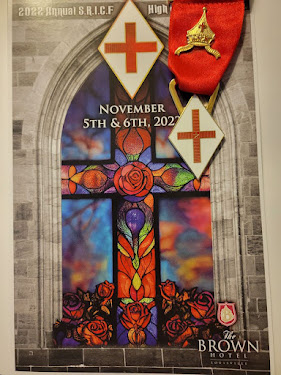 This week was one for the books. A few of us flew in on Wednesday and spent Thursday touring the Makers Mark distillery. It is in the middle of nowhere, but it is a beautiful campus.

Friday morning started with the opening procession of the High Council by Most Worthy Frater Jeffrey Nelson, IX°, KGC. There were several distinguished guests introduced from other Masonic appendant bodies and from other Rosicrucian High Councils from around the world.

After lunch, Right Worthy Frater Piers Vaughn, IX°, KGC, of New Jersey College, gave a presentation called "In Measure, and Number, and Weight." Next, Worthy Frater Matthew McColm, IV°, of California College, gave a presentation called "An In-Depth Look at Astral Projection - Myth or Science?" Then Right Worthy Frater Myron Deputat, VIII°, of New York College led a Practicum Exercise called "The Use of Sound and Light in Meditation." Once the business of the day was concluded, several of us hung out at the Hospitality Suites hosted by Kentucky College; Alabama and Gulf Coast Colleges; and Arizona, Illinois, and Prairie Land Colleges.

Friday night the VIII° and IX° were conferred on those chosen for these honorable distinctions. I had the pleasure of serving as the Celebrant for the VIII° conferral team. I don't have to tell you that I was nervous, but I think it went off without a hitch. I want to thank the Most Worthy Supreme Magus for appointing me to this position and the Frater who gave him my name. I also want to thank Right Worthy Frater Jack Harper, IX°, Chief Adept of Texas and Director of Ceremonies for the High Council, and Right Worthy Frater Jim McGee, IX°, Chief Adept of Alabama and Conductor of Novices for the High Council, who also served on the conferral team. I also need to thank Patrick “Sully” O’Sullivan, VIII°, Planning Director - Logistics who assisted in organizing the candidates before and during the conferral.

Once the grades were conferred, the election of High Council officers was held:

After lunch, I had the pleasure of being the presenter. I gave my presentation "The Mysteries of Mithras". I thought it was well received and had a great Q&A following my presentation. Following me was Worthy Frater Thomas Harper, IV°, of Kentucky College who gave a presentation called "Portal: An Ophthmalmologist's Esoteric Perspective on the Eye."

The meeting ended with announcements and remarks from the visiting Supreme Magi. The night was filled with the Gala Banquet and socializing in the hospitality suites. Now I'm on a plane to NY so I can catch my flight to my next adventure. Stay tuned.