In his August 2011 article in the Knights Templar magazine, Brother Chris Hodapp, of Freemasons for Dummies, talks about the fading interest in the "paramilitary customs of marching in drill teams and rehearsing twelve-man openings." as well as shelling out the cash for the naval style dress uniform of the Victorian Age. He, along with many others, point out the lacking of Templar research that should be conducted in the Commandery, but like a lot of Masonic organizations, the education programs are almost none existent.

When one says "Templar", one usually thinks of chain-mail, broadswords, and steel helmets not black dress uniforms.  There seems to be a lack of connection to the medieval Templars. Seeing the problems facing Masonic Templary, Raper Commandery No.1, out of Indiana, started Levant Preceptory who refer to themselves as a Period Order of the Temple Reenactment Unit.

According to Bro. Chris:


The goal was to create a medieval period degree team for conferring the Order of the Temple, as well as a promotional public face for Indiana Templary. The mission is not to represent modern Masonic Knights Templar as a variation on the Society for Creative Anachronism, but to spread the word that Christian chivalry and knighthood still exist in a modern world as an active part of the fraternity of Freemasonry.

They kept the Preceptory as an informal club connected to Raper Commandery so they didn't have to get a new charter and be required to purchase regulation uniforms or hold business meetings.


As an informal club, Levant has no separate officers, bylaws, dues, regulations, or requirements. Knights are simply expected to provide their own medieval uniforms and equipment, and to know their assigned cast parts in the standard ritual of the Order of the Temple.
- Christopher Hodapp

While the Preceptory works under Raper Commandery and their charter, the group encourages participation from all Sir Knights of Indiana. They didn't want to detract members from their own Commanderies and to keep it unique they wanted to perform the Order of the Temple only twice a year.

Their garb consists of a broadsword, steel helmet, chainmail hauberks, gauntlets & coifs, white tunics (with a red cross over the heart), and other essential equipment.  The current Armorer of Levant Preceptory, Sir Knight Robert Coleman, has a great knowledge of medieval period garb as well as outfitting men on a budget. The white tunics are made from a "heavy canvas duck material hand-sewn by Robert's wife" and custom-fitted to each Knight.  To keep the white tunics clean the inside of them are lined with black material. The chain-mail can be made either out of steel or aluminum, depending on the need of the Knight. All of this can be purchased for as little as $300 which is about the same price as a feathered Chapeau.

They have created equipment for conducting the ceremony outside to include specially made chairs, altar, and a tent to meet in.  These Sir Knights of Levant Preceptory have attracted a lot of attention not only in their state but across the nation, even performing in the surrounding states. Levant Preceptory has even appeared in a Templar documentary.

According to the previously mentioned Templar article:

In addition to conferring the Order of the Temple, Sir Knight James Dillman created a public ceremony suitable for non-Masons in which the Knights dramatize the night before the arrest of the order in France in 1307. At its first public presentation for a statewide gathering of DeMolay members and parents on the 700th anniversary of the arrests on October 13, 2007, the enthusiastic audience spent two hours afterwards asking questions, trying on the equipment, and bursting with excitement over seeing Templar Knights assembled as they had always imagined them.

This would be amazing to see and I hope to eventually to attend their presentation.

White it can be said that this isn't a solution to bringing Masonic Templary about, many young members are desiring something very similar to this kind of reformation. 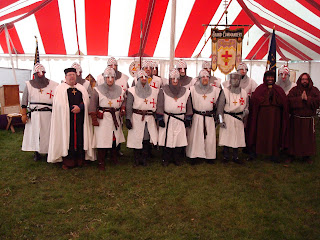 May Common Sense never quell our love for high hearted adventure, nor dull expediency prevent our doing brave, splendid, foolish deeds. May we ever serve romance as we ride errant to and fro about a sunlit world. If we be not always wise, God send that we at least be admirable.