The Hieroglyphical Emblems of the Master Mason

The Chairman of the Grand Lodge Education committee asked me to prepare an article on the Eight Classes presented during the Master Mason degree. While I will quote a few times from the Masonic explanation, I wanted to explain the history, and meaning behind many of the symbols that can be often overlooked due to the cultural change since the time the rituals were written.

In the Lecture of the Master Mason degree, every one is given at least a basic introduction and explanation of the Eight Classes of Hieroglyphic emblems with instruction that the fuller explanation is to be found in our Blue Monitor. Even if one reads the fuller explanation, how many have a strong understanding of what these symbols represent, why the represent these ideals, and the history behind them all?

While we are given the explanation in the Master Mason degree that the Steps represent the three Principle Stages of Human Life, the Three Steps, and particularly the number 3, is seen throughout all three degrees.

The 3 Steps instruct us that while growing and advancing through life, we must ensure before we take the next step that our current step, our foundation, is well established, for without taking the next step would be foolish and possibly disastrous to our moral and Masonic edifice.

Next our attention is directed to the Pot of Incense, or sometimes referred as a "censer", which is said to be an acceptable sacrifice to the Deity. Now why is this?  To many the burning of incense is a representation of prayer as the smoke ascended to Heaven. The burning of incense is also an imitation of the ancient practice of sacrificing animals to God. In Psalms 141:2 it reads:


Let my prayer be set forth before thee as incense; and the lifting up of my hands as the evening sacrifice.

In Revelations 8:3 we also see:


And another angel came and stood at the altar, having a golden censer; and there was given unto him much incense, that he should offer it with the prayers of all saints upon the golden altar which was before the throne.

Much of the focus of this symbol is on the incense itself, but we must remember the vessel, the pot, in which this is all contained in has many interpretations.  One can see it as the heart in which this fervor burns as well as the manifold blessings we hope to enjoy by giving these prayers to the Almighty.

What is a pure heart?  A pure heart is one of sincerity and compassion. From the Masonic Dictionary, without sincerity there can be no real character. And as the incense should continually burn so should we continually grow, never being satisfied with our current standard, but ever willing to build his character.

The Bee-Hive, in my opinion, is probably the most misunderstood symbol. Immediately we are told that it is an emblem of industry, but this can be misleading as in this instance industry does not mean machinery, it actually means strength in numbers. Historically, industry meant employing a large number of men to accomplish a project. For this definition of industry the Bee-Hive is a perfect representation as we see that hundreds or thousands can accomplish a task much easier versus the employment of just one.

Strength in numbers and the Bee-Hive is also a great symbol for mankind as we are a social creature and rely upon our fellow man for aid, support, and protection. This symbol of industry and cooperation also warns us against laziness, where in the fuller explanation of this symbol we see:


Thus was man formed for social and active life, the noblest part of the work of God, and he that will so demean himself as not to be endeavoring to add to the common stock of knowledge and understanding maybe deemed a DRONE in the HIVE of nature, a useless member of society, and unworthy of our protection as Masons.

The next symbols, in the explanation we're told they don't necessarily represent an ideal, but rather remind us of particular Masonic virtues, silence and circumspection.

First, let us look at these two values. While silence is not always connected to secrecy, there is often a correlation. Silence is connected with circumspection which is a prudent, discrete observation of our actions to avoid embarrassment or distress (also see caution). As good Masons we must be wise as well as guarded in our thoughts, words, and actions, as we can see that throughout history that the enemies of Freemasonry will use every little unworthy action to damn the entire fraternity. With this symbol are we reminded greatly of the Four Cardinal Virtues lectured during the 1st Degree.

Now look at the symbols themselves, the Book of Constitution and the Tiler's Sword, which will give us a stronger understanding of why they are to remind us of Silence and Circumspection.  The Book is where we find the rules, regulations, and how we are to be governed. From the Masonic World website, an unknown author talked about how this book is a symbol of constitutional government (whether that of the US or of our venerable fraternity). The Tiler's Sword is a symbol of protection against the cowan and eavesdroppers.  From the MasonicWorld website:


I believe the Book of Constitutions Guarded by the Tiler's Sword teaches us that Masonry should always be the Guardian of Constitutional Government.

Justice and the Deity are emblematically represented by the Sword pointing to the Naked Heart and the All-Seeing Eye. By the Sword pointing at the Naked Heart, we are reminded of our obligation and that justice will come to all who violate the laws that regulate their lives, whether from secular or Divine authority. The All-Seeing Eye is a symbol of God's omniscience. The Naked Heart is to demonstrate that although we can hide our sins and crimes from the eyes of man, we cannot hide from the omniscience of God and his punishment symbolized by the Sword.

From Albert Mackey's "Encyclopedia of Freemasonry":


The Sword Pointing at the Naked Heart is another emblem which need not have a depressing meaning; it should have, rather, a cheerful meaning, because when justice searches out every heart it means that men have security, live in civil order, and therefore can be happy.

The Anchor and the Ark represent a well-grounded hope and a well spent life. These symbols are seen as peculiarly Christian as they do not appear to have belonged to the classical system of symbols. In Hebrew 6:19 (KJV) it is written "Which hope we have as an anchor of the soul, both sure and steadfast, and which entereth into that within the veil"  For many in the ancient world, and even today in many places, life is a stormy passage. The anchor symbolized that the voyage was complete and that one had arrived safely in the port. It is thought that tombs which had this symbol carved upon its walls were inspired by the Biblical verse. Attached to this was the ship, that symbolized the vessel voyaging through the rough seas.  In Freemasonry, the ship was replaced with the Ark, which was still to represent life.  How appropriate it is for these symbols, the ark and the anchor, to be with the Master Mason degree whose teachings relate to life and death.

As we learn in the Fellow Craft, Geometry, the first and noblest of sciences, is the basis upon which the superstructure of Masonry is erected. When we come to the degree of Master Mason we encounter yet another reference to this noble science in the form of the 47th Problem of Euclid, which is a formula use to find the length of the hypotenuse of a right angle triangle.  In the lecture, we hear:

The Forty-Seventh Problem of Euclid was an invention of our ancient friend and Brother, the great Pythagoras, who, in his travels through Asia, Africa, and Europe, was initiated into several orders of priesthood, and was raised to the Sublime Degree of Master Mason. This wise philosopher enriched his mind abundantly in a general knowledge of things, and more especially in Geometry, or Masonry. On this subject he drew out many problems or theorems; and among the most distinguished, he erected this, which, in the joy of his heart, he called out EUREKA, in the Grecian language signifying, I HAVE FOUND IT; and upon discovery of which he is said to have sacrificed a hecatomb. It teaches Masons to be general lovers of the arts and sciences.

This theorem is said to have been discovered by Pythagoras during his travels through Egypt and taken it back to Greece. With the Egyptians we are told that to this triangle was a symbol of nature and attached to it were Osiris, Isis, and Horus.  Osiris represented by the base, Isis by the perpendicular, and Horus as a product of the first two was represented by the hypotenuse. This formula was used in many projects and wonders that marked the landscape of ancient Egypt some of them that still stand today such as the Great Pyramids at Giza.

It is curious to note that Euclid, the Father of Geometry, lived several hundred years after Pythagoras although there is historic evidence that the Egyptians and Babylonians knew of this formula centuries before Euclid and Pythagoras. Euclid was a Greek mathematician who lived in Alexandria around the time of the reign of Ptolemy I. Euclid's Elements of Geometry (a series of 13 books) is one of the most influential works in the history of Mathematics, particularly Geometry. 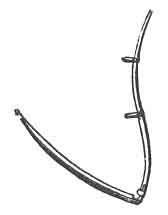 It's fitting that the last symbols brought to our attention are ones that represent the mortality of man: the Hourglass and the Scythe. These symbols are fairly young in Freemasonry and are said to have been added by Thomas Smith-Webb. By the Hourglass we are reminded that life is not to be wasted and we should make the most of it until the end of our days, represented by the Scythe. The use of these symbols though can be seen throughout history, particularly the Scythe. It also referred to as the sickle.  Regardless of its design or name, the symbolic meaning associated with this instrument has always stood for the reaping of humanity and the cutting off of life.

The personification of death is often seen carrying a scythe or sickle. There are many legends, myths, and lore connected with this feared entity. Today it is known as the "Grim Reaper", but depending on the time and culture, it has gone by many other names. The Scythe was not always seen as the weapon of choice for the Reaper, with the agrarian cultures we see the attachment. One of my favorite mythologies was the Greek mythologies.  In it there are three Fates or Moirai, named: Clotho, Lachesis, and Atropos. While all of them were regarded as cruel due to their inexorable duty, it was Atropos who was feared as she was the one wielded the shears that would cut the thread of life, while her sisters spun and measured the thread of life.

Looking in the Book of Revelations we see a similar reference to the scythe and reaping:

As we should learn in life and do learn in the Third Degree, death is a natural part of the passage of time and an integral part of the renewal of life.  Plants die to feed animals and so must life cease to give way for other life.

6. "Hammer". (2008, February 22). The Hourglass, the Scythe and the Sprig of Acacia. Retrieved from The Sanctum Sanctorum blog: http://thesanctumsanctorum.blogspot.com/search/label/Hourglass

9. Mackey, A. (n.d.). Secrecy, Silence, Circumspection. Retrieved from Encyclopedia of Freemasonry and its Kindred Sciences: http://encyclopediaoffreemasonry.com/s/secrecy-silence-circumspection/

13. Unknown. (n.d.). Book of Constitutions Guarded Over by the Tiler's Sword. Retrieved from MasonicWorld.com: http://www.masonicworld.com/education/files/artjan02/bookofconstgbytilersword.htm
Posted by Barry at 1:00:00 PM