In my article "The Templar Uniform" I briefly discuss the history and evolution of the modern Masonic Templar uniform. In the original uniform worn by early Masonic Templars in the US was composed of a black triangular apron with skull & bones, a baldric, and a sword. Around the mid-19th century, we see the emergence of the jacket and chapeau. In discussing this topic, many, including myself, wish that the Grand Encampment would change the uniform and bring back the apron. The apron is a particularly interesting piece of regalia that displays symbols of Templary and the use of aprons is something that would physically tie us back to the Lodge and our Mason heritage. 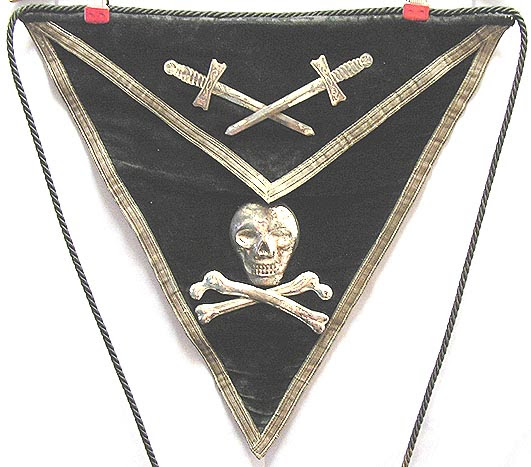 In American Masonic Templary, we owe most of our information on the Templar Apron to Thomas Smith-Webb and his famous 1797 Monitor. Originally the Templar degrees were conferred under the authority of Blue Lodges and it is theorized the original Templar Apron was a modification of the apron seen in Craft Masonry to fit the ritualistic legends of the Templar Orders. In the ritualistic monitor, Thomas Smith-Webb describes the apron as "white with a black border or black with a white border". The flap black, and a skull and crossbones embroidered in silver thereon". This standard for the uniform was accepted by the early Templars, but this would all change with the formation of the Grand Encampment.

For some time the regulation of the uniforms was under the rule of the Grand Commanderies. This lack of uniformity caused the Grand Encampment to take action. Grand Master Hubbard, who served for 4 Triennium over the Grand Encampment, desired to standardize the uniform regulations and thus make the Templars a respected Order. At the 14th Triennial, Sir Knight Hubbard issued the "Digest of Decisions" which covered three subjects: dress, work, and discipline of Templar Masonry. The area of dress wasn't regulated until 1859 (3-years after the Digest) where legislation was passed on the standard uniform of Masonic Templary and would be revised in 1862. One of the more important pieces of the 1859 legislation was the abolishing of the Templar apron. There was an exception placed within the regulations that allowed Commanderies that were formed 1859 to still wear the apron; generally they were allowed to wear the entire old uniform. Commanderies co-existing under the old and new uniform standards lasted until 1872 when the current Grand Master, JQA Fellows, decided to enforce a single standard uniform which required all Commanderies to adhere to uniform policies established in 1859 and 1862. Of course though, there was an exception made and that was to Washington Commandery #1 (DC) who still wears it to this day, but only wears it on special occasions.

Many, even some noted Masons like Albert Mackey, opposed the Grand Encampment's edicts. Many saw the banishment of the apron as a rejection of an essential piece of Masonic Templary, a rejection of the heritage and history. A compromise was struck to allow the pre-Grand Encampment Commanderies to still operate under the old uniforms and in 1886, under the auspice of Sir Knight Roome the Most Eminent Grand Master of the 23rd Conclave, some control was given back to the Grand Commanderies, but even after this control was returned no Commanderies adopted the Templar Apron. 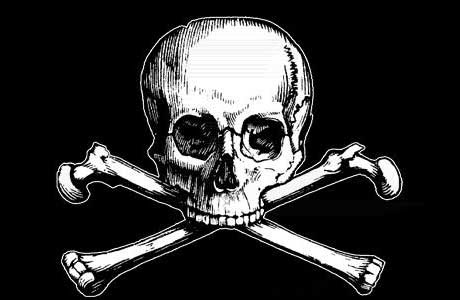 The colors black and white remind us of the duality around us. Instantly all Masons are reminded that human life is checkered with good and evil. That as Knights of Christ we are to be good and true to our friends, but terrifying to our enemies. Black also symbolizes the physical world while the white represents the spiritual world, the earth and the sky, the male and female, the loss of life and hope of a glorious hereafter. Black depicts the sins of the secular world that the Templar knights had chosen to leave while the second section was white depicting the purity that the order offered them, a sort of transformation of darkness to light. Silver represents purity, cycles, truth, awareness, vision, and strength. The skull and crossbones are emblems of mortality, the inevitability of death, but against popular belief this was not a symbol used by the medieval Templars on any seals or carvings. These symbols all taken together remind us of the mortality of this world and the immortality of the soul, lessons instructed to us through the degrees of Freemasonry. This apron should also remind us of the Knighthood we commemorate where the symbols reminds us of the martyrdom of DeMolay, the last Grand Master of the medieval Knights Templar, and all those who perished from the tyrannical inquisition that squashed the Templar Order.