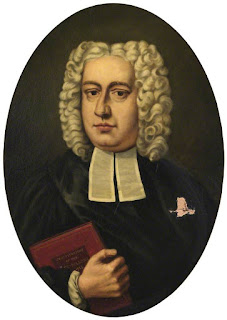 Less known to most American Freemasons, Desaguliers was the son of a Huguenot would grow to be known as an icon in the early revival of Freemasonry of the 18th century and, according to Albert Mackey, "to whom, perhaps, more than any other person, is the present Grand Lodge of England indebted for its existence."
clergyman and was born in La Rochelle, France, on March 12th, 1683. Desaguliers was a French-born English philosopher who

In 1598, Henry IV of France issued the Edict of Nantes which reinstated civil rights and legal status to Calvinist Protestants (or known as Huguenots) of France who were seen by the Catholic community as heretics. This edict ended the religious wars that had torn up France, but, in 1685, this edict was revoked by Louis XIV, grandson of Henry IV, which caused an exodus of Protestants due to the persecution and strained relations with Protestant nations. It was during this exodus that Desaguliers and his family moved to England.

He was educated at Christ Church, Oxford, becoming known as a philosopher and lecturer, and earned a Bachelors and Doctorate of Law. He was also a member of the Royal Society of London where he received the Society's highest honor, the Copley Medal, several times. He was a reputed scientist and inventor, one of the Copley Medals being for his discovering of the properties of electricity. He is also said to have invented the planetarium.

In 1712, he married Joanna Pudsey and together they had 4-sons and 3-daughters, though only 2-sons survived beyond infancy. The next year he moved to Westminster where he continued to lecture on experimental philosophy and drew the attention of Isaac Newton under whom Desaguliers. He was also a man of the cloth and served the Duke of Chandos as his Chaplain.

In Freemasonry, little is known before he served as the first Grand Lodge as Grand Master in 1719, Deputy Grand Master in 1723 and 1725; it is most likely that he was initiated in one of the four founding Lodges of London, but no proof exists to prove or disprove the theories of his initiation. Brother George Maine, under the Grand Lodge of Washington, stated in 1939 that Desaguliers provided strong leadership in a time of political strife and dissension, and brought the life needed for the prosperity of Freemasonry. Desaguliers wrote most of the ritual, according to Brother Maine, and here we see the use of the "Great Architect of the Universe" (and other variations).

He was known to collect early Masonic manuscripts and though Dr. Anderson is credited for the first Constitution, it was compiled under the supervision of Desaguliers; being a collector it is likely that he furnished Dr. Anderson with the documentation needed to publish the Constitution which immortalized his name. It was also under his governance as Grand Master that older members began to attend Lodge again and many noblemen were initiated into the order. Freemasonry became a trend and noblemen began to flock to Freemasonry; the Grand Masters started being chosen among these nobles and the trends started by Desaguliers could have possibly inspired Ramsay to give his famous oration which I believe was a way to sell Freemasonry to the French aristocracy. Desaguliers was a notable scientist, educator, minister, writer, lecturer, experimenter, civil engineer, doctor of laws, and physicist who had become well known for his lectures, and so had credibility and legitimacy which he took with him to Freemasonry. This strong leadership given by Desaguliers in this early Grand Lodge and the initiation of men of importance catapulted around the globe.

He is also attributed with starting the line of charity that would eventually develop into the Fund of Benevolence. He was important in the spread of Freemasonry around Europe. One notable case was he served as Master of a Lodge in Holland where he initiated Francis I, Duke of Lorraine, later to become Emperor of Austria. The last record of his Masonic career was on February 5th, 1742; two years prior to his death.

Desaguliers had long suffered from gout every winter, and died after several months of severe illness at his home in the Bedford Coffee House, Covent Garden, London, on February 29th, 1744. From his service as Grand Master, ritual reformation, and his collections of Masonic documents, Freemasonry emerged as a reputable institution and is truly indebted to him.