The Illustrious Order of the Red Cross 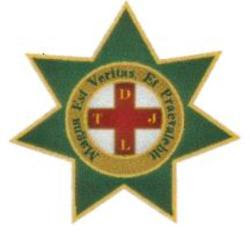 The first order conferred by a Commandery of Knights Templar is the Illustrious Order of the Red Cross; in Chivalric Masonry, the term 'orders' is used rather than 'degrees,' but both refer to "the progress of a candidate toward the completion of his membership." In the Illustrious Order of the Red Cross, the candidate represents Zerrubabel and presents himself as a Royal Arch Mason to a Grand Council that just convened in Jerusalem to deliberate upon the unhappy condition of the country and which desires to find a means to secure the favor of King Darius in order to proceed with the rebuilding dealt with in the Royal Arch degree. The candidate is detained and guided to the Persian court and reminds the King of his promises to aid the Jews in their work. Debate ensues and Zerrubabel boldly proclaims that Truth is on his side of the issue. So impressed with the speech, King Darius decrees his support for the continuation of the rebuilding, establishes the Illustrious Order of the Red Cross founded up on Truth, and confers it upon Zerrubabel. This legend is based upon the accounts found in the Book of II Esdras in the Apocrapha and in the writings of the famous Jewish historian, Josephus.

This order is a transitional degree that bridges Royal Arch Masonry to Chivalric Masonry. The lessons taught encourage the constant search for Truth, and emphasize the importance of Liberty and Justice with a right to worship Deity under whatever name he may be called. Historically, elements of this Order were practiced in Ancient Lodges before the final form of the Master Mason Degree came into use. It is still practiced in the full ceremonial form by the Knight Masons of Ireland and the Knight Masons of the United States, and as the Red Cross of Babylon in the English Order of the Allied Masonic Degrees.

The degree is conferred in a "Council of the Illustrious Order of the Red Cross" which is presided over by the Sovereign Master, and supported by other officers, and will create a "Companion" of this Order. This Order, in American, has been under the control of the Grand Encampment of Knights Templar of the USA since its founding.

The Banner of the Order of the Red Cross is green with a 7-pointed star at its center. Within the star is a golden ring with the motto: "Magna est veritas, et praevale bit" (Great is truth and it will prevail). Within the golden ring is a white circular field with a red Greek cross upon it. On each of the four arms is a letter which represents Deity, Truth, Justice, and Liberty. These will commemorate our faith in God and in the Grand Characteristics of this Illustrious Order.

When studying the history of the Order of the Red Cross, it is important to note that there are a number of degrees that use the same name, but have no relationship with each other. How this order came to be in existence is not exactly known, but most scholars agree that it was first conferred in the American Colonies by Scottish or Irish troops. It was through the efforts of Thomas Smith-Webb and Henry Fowle that this Order survived and came to be attached to the American Templar system. Some have claimed that it was taken from the Scottish Rite, but according to Ward St. Clair states that this is erroneous and  W.J.B. MacLeod Moore (Provincial Grand Commander in Canada) stated that after examining the ritual he concludes that the Illustrious Order of the Red Cross used in America comes from the Irish degrees known as "Knights of the Sword, Knights of the East, and Knights of the East and West," has given under the Templar warrants of Ireland, and the Royal Arch Chapters of Scotland." These names are not to be confused with the degrees, with the same name, found in the Scottish Rite.

While Thomas Smith-Webb is seen as the main driving force behind the continuation of the Illustrious Order of the Red Cross, it needs to be remembered that it existed prior to his efforts. The first mention of the Order of the Red Cross is in the “Beaumont” diploma issued by South Carolina Encampment #1 on August 1, 1783 and which associated in with the Order of the Temple. Another record is found in New England where a certificate from the Encampment at Newburyport, Massachusetts, was issued to Hamilton Moore on February 16, 1796.


“A Knight Templar created in a foreign jurisdiction, and who has not received the Order of Red Cross may, at his examination, take the valve and have that order communicated to him and hereafter may be admitted to the Asylum.”

Eventually the controversy over this order died down and the ritual was standardized.

The Illustrious Order of the Red Cross is important as it ties in Ancient Craft Masonry with Chivalric Masonry, the Old Testament with the New Testament. The Illustrious Order of the Red Cross reminds us of the important lessons of Truth and we can see that the legend foreshadows the message of Christ when he declared, “I am the way, and the truth, and the Life.”

8. The Illustrious Order of the Red Cross. (n.d.). Retrieved from Rainier Commandery #28: http://rainiercommandery.weebly.com/the-illustrious-order-of-the-red-cross.html