The Priory of Knights of Malta, Part I: Officers 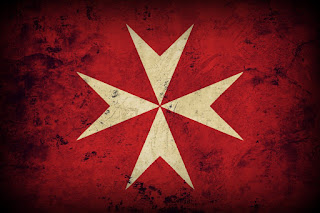 The Prior is the chief officer of the Priory and is equivalent to the Eminent Commander in the Commandery of Knights Templar. A Prior is a traditional title used to represent a monk or priest who is the head of a religious house or order. This rank is below that of the abbot. Prior comes to us from the Latin tongue and is used to mean "former, previous, first, etc." from which it was used to figuratively as "superior (in rank), forefather, and better." The Order of Malta is the first of the Christian Orders conferred in a Commandery of Knights Templar and impresses upon the candidate the importance of faith, and it is interesting to note that the title presiding officer of this group is an ecclesiastical, or religious, one rather than one that denotes a military position.

The second-in-command of the Priory is the Lieutenant Commander. This position corresponds with the Generalissimo in the Commandery. The title "Lieutenant Commander" is a popular position often used in naval units that are ranked below "Commander." A Commander is someone who is in charge of a group of people. This title reminds us that while a high-ranking officer, the Lieutenant Commander is still subordinate to the Prior. The word "lieutenant" is rooted in late 14th century France, and is derived from two words: "lieu" and "tenant." The word "lieu" means "place" and "tenant" means "to hold" so lieutenant was used to meaning placeholder, substitute, or deputy; in this context, it is referring to someone who is subordinate to a higher authority. The word "commander" is derived from the Latin word "commandare" meaning "to recommend, to entrust, to commit, and to order." His primary duties are to assist the Prior, particularly in the closing of the Priory.

Third-in-line is the Captain General and corresponds in the Commandery with the same name. He assists the Prior in opening the Priory and leading the opening procession. This title has often been used for military officers, but is also used for gubernatorial reasons. Etymologically the word "captain" comes from the Latin word "capitaneus" meaning "chief" which itself originated from the "caput" meaning "head." General is also rooted in Latin, from the word "generalis" meaning "inclusive" or "relating to all". This was expanded to an officer holding superiority over others.

Corresponding to the Prelate in the Commandery, the Chaplain is charged with scriptural lessons to the candidate as well as other ritualistic duties. Traditionally a Chaplain is a member of the clergy who is attached to a private chapel, organization, military unit, institution, or society. This title comes from Old French "chapelein" meaning "clergyman" deriving from the Medieval Latin word "cappellanus" meaning the same.

The Marshal is the last of the 5-officers stationed in the East. This officer corresponds to the Senior Warden in the Commandery and Senior Deacon in the Lodge as he is the conductor of the candidates during the ritualistic ceremonies of the Order and is charged with the arrangement of ceremonies. The title Marshal has been used by the military, courts, and other parts of society as someone who is charged arranging and directs "ceremonial aspects of a gathering." Marshall comes from the Old French word "mareschal" meaning "commanding officer of an army; officer in charge of a household" which is derived from the Frankish-Germanic word "marhskalk" meaning "horse-servant." It is interesting to see that the medieval Knights Templar denominated their third-in-command as Marshal was in charge of the troops and advised the Grand Master on all things relative to the war effort. It is also interesting to note that the title "Marshal" is not used in the Commandery of Knights Templar, but in the Order of Malta.

Stationed in the West of the Priory in the Captain of the Outpost and whose duty it is to work with the Guard to ensure the security of the Priory. He would correspond in the Commandery with the Warder and the Junior Deacon in the Lodge. An outpost is a "security detachment dispatched by a main body of troops to protect it from enemy surprise." As we saw with the Captain General, captain derives from a Latin word to mean "chief" and the word "outpost" is a combination of "ut" meaning "out, without, or outside" in Old Anglo-Saxon languages and "poste" which is Middle French for a "place where one is stationed."


The last of the listed officers of the Priory is the Guard. This officer sits without the doors of the Priory and corresponds with the Sentinel in the Commandery. He ensures the security of the Priory from without. The word "guard" derives from "garder," an Old French word meaning "to keep, maintain, preserve, or protect."


During the initiation ceremony, there are also banner-man and Knights at the Table in the West, but they are not the assigned officers appropriated to a Priory of Knights of Malta; I will talk about them in future parts of this series though. I find the history of these titles to be fascinating and how Freemasonry has adopted them into the Priory of Knights of Malta.