Today celebrates and commemorates the life and the death of Saint Thomas a Becket: defender of his faith, despised by his monarch, and slaughtered by four knights.

Thomas Becket, sometimes referred to as Thomas of London or Thomas of Canterbury, was born around December 21st, 1118 (others say 1120), in Cheapside, London. He was the son of Gilbert and Matilda Becket. There are theories as to the lineage of the parents both being from Normandy and one famous one that Thomas's mother was a Saracen that fell in love with his father while in the Holy Land. What is known is that Gilbert was a merchant living in London when Saint Thomas was born. 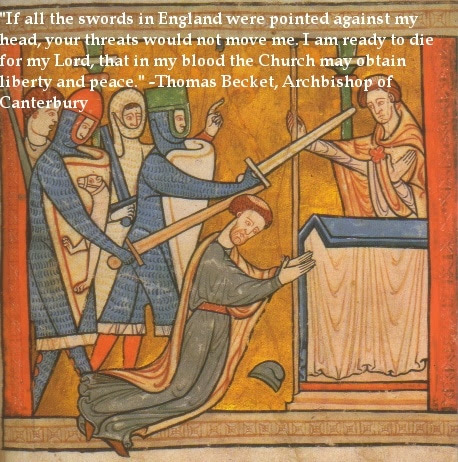 As a child Saint Thomas studied at Merton Priory and then later the grammar school at St. Paul's Cathedral in London. Throughout his schooling he studied just what was required and whose skills were described as rudimentary.

When Henry II became King in 1154, Theobold recommended to the new sovereign that Saint Thomas be appointed as Lord Chancellor, which occurred in January 1155. The Chancellor served as royal chaplain, the king's secretary in secular matters, and keeper of the royal seal. Saint Thomas excelled so well at the job and gained the favor of the king that he sent his son to live with Saint Thomas. Some describe Henry and Saint Thomas as behaving as schoolboys and being great friends.

One such issue came over the jurisdiction of secular courts over the clergy. The king pushed for clergymen to be tried for petty crimes in secular courts, but Saint Thomas opposed it as it was his duty to be the judiciary over the clergy in England. The king attempted to turn some of the bishops against and usurp church authority. This would all lead to the Council of Clarendon.

This council passed a set of legislative procedures to restrict ecclesiastical privileges as well as the authority of religious courts and general authority of the Catholic Church. Saint Thomas was asked to sign off, but he rejected this constitution. On October 8, 1164, Saint Thomas was summoned by the king to the council and was accused of contempt of royal authority and malfeasance during his time as Chancellor. After celebrating mass, he presented himself before the council where the king demanded a sentence should be passed on him for his crimes, but refused to accept such sentence as he was not subject to only the laws of God and the Church. Before he could be arrested, Saint Thomas secreted himself out of the kingdom and fled to France where he was welcomed by the French monarch, King Louis VII. He offered his resignation to Pope Alexander III, but refused to accept it from Saint Thomas.

Saint Thomas spent much of his time in a Cistercian Abbey, but Henry threatened the Cistercians in England so as to avoid further persecution in England, expelled Saint Thomas from their abbey in Pontigny (several kilometers of SE of Paris). Pope Alexander III attempted to resolve this conflict by diplomatic means and sent representatives to serve as arbitrators between Henry and Thomas. Eventually Saint Thomas would be allowed to return to England.

In June 1170, Roger de Pont L'Évêque, Archbishop of York; Gilbert Foliot, Bishop of London; and Josceline de Bohon, Bishop of Salisbury, crowned the heir apparent, Henry the Young King, at York; something likely done as an insult to Saint Thomas. Authority to do such a thing was left to the Archbishop of Canterbury, so in November of 1170, Saint Thomas a Becket excommunicated all three of the priests. This incident was what led to the death of Saint Thomas.

There are a variety of theories as to exactly what happened, but the most accepted theory is that upon hearing of Saint Thomas recent actions, he stated "Will no one rid me of this turbulent priest?" Reginald Fitzurse, Hugh de Morville, William de Tracy, and Richard le Breton, four knights, hearing these words, and taking them literally, took off for Canterbury and arrived on December 29th, 1170. They originally left their weapon outside the cathedral and disguised themselves under cloaks that concealed their armor. They attempted to coerce him to leave with them to answer for his actions, but he refused them.

The knights left and retrieved their weapons. They found Saint Thomas on his way to the main hall where it is said they yelled out "Where is the traitor?" and to which he responded with "Here I am, no traitor, but archbishop and priest of God." They attempted to drag him out, but after meeting with resistance, they executed him in the cathedral.

The news of his death spread throughout Europe and soon many began venerating him as a martyr. Even King Henry visited Becket's tomb, had himself scourged, and denounced the actions of the knights; something likely done to appease the Pope and avoid excommunication. Nearly three years after his assassination, he was canonized as a Saint by Pope Alexander III. The knights who had executed Saint Thomas were themselves excommunicated and were ordered to serve in the Holy Land for 14-years.

Saint Thomas's tomb became a popular pilgrimage destination and existed until the time of the Reformation when Henry VIII dissolved the religious institutions. There are theories that Saint Thomas's body was moved or hidden away in another location, but no evidence exists to corroborate such ideas.

Saint Thomas has been an influence in the world in the form of the Commemorative Order of St. Thomas of Acon, has had an effect on literature such as Chaucer's "The Canterbury Tales", and is a Saint celebrated by both Anglicans and Catholics. This saint died defending his integrity and conscience rather than being bullied by a tyrannical monarch.