The sixth Grand Master of the Order was Bertrand de Blanchefort, serving from 1156 until his death in 1169. While he known as a warrior, his time as Grand Master was known for its reforms that transformed the image of the Templars from one of brutish knights to one of guardians, which led him to be known as the "Great Reformer of the Order." 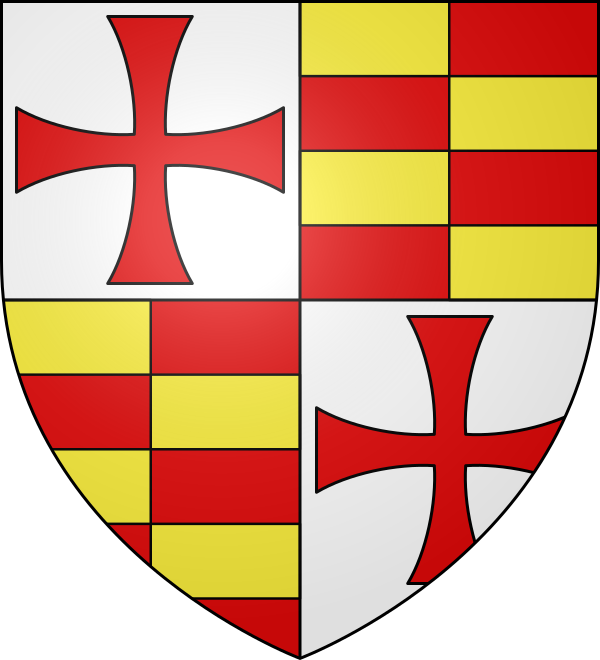 Bertrand was born around 1109, but the exact date is not known. He was the youngest son of Lord Godfrey de Blanchefort from Guyenne. Guyenne was an old French province in southwest France whose main city was Bordeaux, but after the French Revolution was divided into several departments.

There is little information on when Bertrand de Blanchefort joined the Templar order, but what is known is that in 1156, just days after the death of the previous Grand Master, André de Montbard, Bertrand was elected to that position. His quick ascension was due to the fact that by 1156, Grand Master Montbard was an old knight and was in, as we shall say, in semi-retirement in France; similar to what the Grand Master Everard des Barres had done. In Montbard's absence, the Order was overseen by Blanchefort, so he was the most likely candidate when Montbard died in October of 1156.

Bertrand was taken prisoner after a battle between the forces led by King Baldwin III and the Islamic forces led by Nur al-Din near Banyas or Paneas in 1157. Paneas, named for the Greek god Pan, is natural springs and archaeological site located near Mount Hermon. On the return home, Baldwin dismissed the Frankish army which allowed Nur al-Din to set an ambush at Jacob's Ford just south of Hule Lake (roughly 28-km north of the Sea of Galilee). The ambush was so successful most knights were killed, but among the captives were Odo de St Amand, Marshal of the Order (later to be the 8th Grand Master) and Bertrand de Blanchefort. He would remain a prisoner for 3-years until the Byzantine Emperor, Manuel I, negotiated a treaty with Nur al-Din which included the release of the Frankish knights.

Once released, the Grand Master de Blanchefort worked on reforming the Rule of the Order which became known as the "Retraits." In this reform he specified more clearly the duties and responsibilities of the ranks within the Templar hierarchy. This "Retraits" also established some checks and balances on the authority of the Grand Master. One interesting change he pushed for was the use of the title "Master by Grace of God" which was approved by Pope Alexander III.

In 1163, Amalric I succeeded his brother Baldwin III as head of the Latin Kingdom of Jerusalem. His focus would fall upon the caliphate in Cairo which was weakened by the infighting between the Sunni and Shiite sects of Islam. Amalric gathered his forces and set out to Egypt and was accompanied by the Templar and Hospitallier Orders. The Crusaders attempted to besiege the ancient city of Bilbeis in September of 1163, but had to retreat when the Egyptians destroyed the river embankments and flooded the plains were the Crusaders were stationed.

The following year, Amalric would have attempted to take the city, but Nur al-Din started expanding and invading into the Latin Kingdom so Geoffroi Foucher, a Templar, was sent to strike a deal with the Egyptian sultan to ally forces against Nur al-Din. In 1168, Amalric I turned back to conquering Egypt, but because of a treaty the Templars did not take part in this operation.