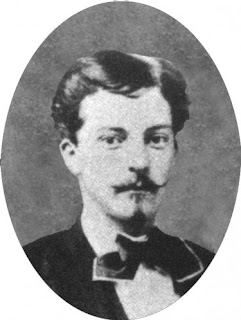 The third in this series of Kappa Sigma Biographies is George Miles Arnold, one of the Five Friends and Brothers. George Miles Arnold was born on August 27, 1851, in Troy, NY. George was born while the family was visiting Troy as they were then living in Mobile, AL, where George's father ran a wholesale business. George's mother died while he was still an infant

George Miles Arnold started attending the University of Virginia in 1869 where studied Latin, French, and Mathematics. It was while studying languages  where he earned the nickname "the little Spaniard." It was in the Winter that the Kappa Sigma fraternity was founded and George Miles Arnold was one of the founders, also known as the Five Friends and Brothers. George played an important role in the history of the fraternity as he wrote the Constitution and served as the first Grand Master of Zeta Chapter, the first Chapter of the Kappa Sigma fraternity in the United States.

In 1871, George started to study medicine, but then in February of 1871 he withdrew from the University after he shot a black resident of Charlottesville while intoxicated. The man survived, but George feared retaliation fled and presumably headed to NY because a few weeks later he was a student in the Medical College of New York; he received his M.D in 1873.

He continued to live in New York working as a doctor and married Minnie Jane Law on September 8, 1874. They had 8 children together, but only 3 survived childhood. Robert Miles Arnold, the only surviving son, would go on to join the Gamma-Zeta Chapter while attending New York University.

It is believed that George Miles Arnold was a Master Mason, but I have not yet confirmed this.

On January 25, 1890, George Miles Arnold died of pneumonia and was buried in Woodlawn Cemetery, in the Bronx. George Miles Arnold was very dedicated Brother and it was that, "He gave nearly his whole time to the society." In commemoration to this distinguished Brother, the fraternity presents the George Miles Arnold Cup to a Chapter who demonstrates "the highest level of commitment to Ritual education, throughout its entire membership."

5. Founding of the Order. n.d. http://gukappasigma.celect.org/about-mu-iota-chapter.