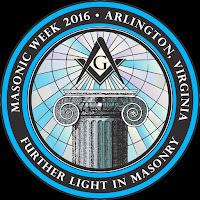 Last week was a great time of fellowship and brotherhood. Masonic Week occurred last week in Arlington, VA. I accomplished a great deal with St. Thomas of Acon, met some new Brothers, and had a very fun time.

Thursday morning started off with the Commemorative Order of St. Thomas of Acon. We brought in some new knights before the Grand Master's Council convened. A new Most Worthy Grand Master was elected and installed along with a new cadre of officers. In the afternoon it was time for the annual meeting of the Provincial Grand Court of the Masonic Order of Athelstan, Province of the USA. After that ended, I came upon the Grand Registrar of the Grand College of Rites and was able to purchase from him two editions of the Collectanea; one on the Martinist Order and the other on the Rite of Strict Observance. The evening was spent hosting Brothers in the NW Hospitality Suite.


The Grand Council of Knights Masons, USA, met Friday morning with the usual business. Not content with just the two books I bought on Thursday, I purchased several more books on Royal Arch Masonry...now to figure out how I'm going to pack them home. In the afternoon the Grand College of America of the Holy Royal Arch Knights Templar Priests met and as I'm not a member, I got the time off. The Sovereign Order of the Knights Preceptor met in the early evening before the All Masonic Banquet. The night was concluded with a meeting and conferral of Ye Antient Order of the Corks.

Saturday night started with the annual banquet and meeting of the Masonic Society where good food and an even better presentation was given. I decided on a whim to attend the meeting and conferral of the Masonic Order of the Bath, which, like the Corks, makes a fun end to a long day of Masonic meetings. After the meeting had concluded I retired to one of the Hospitality Suites hosted by a Brother and while there received a phone call. I was informed that at the meeting of the High Council of the Masonic Order of the Bath, I had been selected to be the Right Honorable Keeper of the Bath Mat for the ensuing year; this position is the beginning of the progressive line of officers. I happily accepted and look forward to the next 6-years in this line. The rest of the night was spent having some great Masonic discussions back in the Hospitality Suite.


Sunday morning was spent packing and the rest of the day was spent traveling...in a circuitous route...back home. Now I'm back home, working on some Masonic To-Do Lists, finishing some homework, and catching my breath.