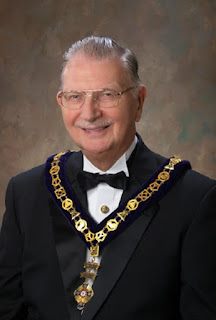 I just heard, that this morning Brother Gerald A. Ford has passed to the Celestial Lodge above.

He was an accomplished Freemason having served as Right Eminent Grand Commander of Colorado (1993-1994), Northwest Department Commander (2000-2003), Most Excellent Grand High Priest of Colorado (2005), Past Grand Preceptor of the Holy Royal Arch Knights Templar Priests (2009), Past Governor General of the York Rite Sovereign College of North America (2012-2014), Chief Adept of the Colorado College of the Societas Rosicruciana in Civitatibus Foederatis, and Primus Master of Rocky Mountain Chapel #26 of the Commemorative Order of St. Thomas of Acon.

Here is an update with a memorial from the Societas Rosicruciana in Civitatibus Foederatis:


Gerald Alan Ford, 76 - Gerry was born September 16, 1939 in Melrose, Massachusetts to Albert Franklin and Doris Mae Folsom Ford. He had a brother Richard 13 years his senior. Because of the age difference they really didn't get to know each other until they were adults. He attended elementary and high school in Melrose and after graduating from high school his first job was working at the Necco Candy Company where his father was an accountant.

He joined the US Air Force in November of 1957 and was sent to San Antonio, TX to begin basic training. From there he went to Wichita Falls for specialized training. After training he was sent to Lowry Field in Denver where he saw President Eisenhower when he landed and parked President Nixon's plane. He met his first wife Sandy at the USO Club in downtown Denver and married her shortly after. Sue Ellen and David Alan were both born at Fitzsimmons hospital.

His next duty post was located just outside Paris, France and this is where Sherryl Lee was born. After 2 years there and many sightseeing trips in the area they returned to the US where he was stationed in Columbus, OH. They spent a short time also in Sumpter, SC where Julie Ann was born. Gerry was then sent to Udorn, Thailand but upon landing only had about 24 hours there as they changed his orders and sent him on to Tuy Hoa, Viet Nam on the Gulf of Tonkin. He was in Air Rescue with C-130P but in his off duty hours managed the base movie theatre for some extra money. They had a nice beach there but it was overrun by jelly fish for a while.

When he returned to the US, he asked to be stationed anywhere west of the Mississippi River only to be sent to Dover, DE. After only being there a short while they attempted to return him to Viet Nam and it was about time to re-sign with the Air Force and he decided to become a civilian again. The family returned to the Denver area where his father-in-law taught him all about framing houses, interior carpentry and all things wood. He loved working with wood and being a perfectionist, everything he touched was beautiful. The family lived in Frisco for a while where he was the construction superintendent on several condo projects in Keystone and the building of the fire stations in Breckenridge. They came back to the metro area and he adjusted to single family home construction. With all of the moving about, Gerry and Sandy decided they would part company. Around that time he met Audrey and they formed a wonderful friendship and married in 1982. At that point he gained another son, Joseph Scott and a daughter, Angela Renee.

From 1984 on he was employed by the Masonic Fraternity with one group or another. He did take a brief respite and worked for about 5 years as the COO for National Association of Credit Management. When he left there he became the Grand Secretary of the Grand Lodge of Colorado and as they say, the rest is history. He retired in 2009 but did help the Grand Lodge for several months in 2014.

While living in Frisco, he joined South Denver Lodge #93 in 1973 with Jess Mann signing his petition. He drove back and forth from the mountains every Tuesday night muttering to himself learning the ritual. Wayne Arner tapped him in 1974 to become a line officer in the lodge and with that he was off and running. He joined South Denver Chapter #42, RAM on May 28, 1975, Arapahoe Council #23, CM on September 23, 1975, and Ascalon Commandery #31 on December 11, 1975. Next was the Scottish Rite on November 15, 1979 becoming a 32° Mason, receiving his Knight Commander of the Court of Honor on October 21, 1985, and earning his Inspector General Honorary on October 22, 1991. Along with all of these organizations, came all of the appendant bodies that are associated with Masonry. I don't think he missed out on any of them. Of course, if you are going to join something, you jump in with both feet and work your way up the ranks. It wasn't good enough for Gerry to settle with what was close by. He had to join numerous bodies in other states and countries as well. When that didn't satisfy him, he was appointed to national officer lines where he excelled with great enthusiasm. He loved everything Masonry and it in turn showered him with much happiness.

Somewhere along the line Howard Montague and Judson Manning convinced him he had time for another endeavor and he joined the Mile Hi Optimist Club and as with everything else, he became their Secretary and eventually was the Club President. He loved working with the kids at the local Boys and Girls Club they sponsored where they had bicycle rodeos and helped the kids learn the care of their own bikes.

His actions after retiring were like a 5 year old when asking if he could have a dog. When Audrey agreed, he went immediately to the local animal rescue facility and found his beloved Chesapeake Bay Retriever, Callie. They were constant companions to his last breath.

Gerry passed away at his home on February 21, 2016 right where he wanted to be - in his recliner. He is survived by his wife of 33 years, Audrey and children - Sue and Robert Sullivan in Denver, David Ford in California, Sherry and Steve Watkins in Maryland, Julie and Jim Girard in Dubai, Joe and Amy Kelley in Arizona and Angie Kelley in Colorado Springs. Twelve grandchildren and 5 great granddaughters. Also included among his survivors are his nephew and three nieces from the east coast and his two favorite sister-in-law's from the west coast. Memorial Services will be held on Monday, March 7th at 1 PM at the Arvada Covenant Church, 5555 Ward Road. Donations may be made to the Knights Templar Eye Foundation, 1614 Welton St #503, Denver, CO 80202 or the Scottish Rite Foundation, 1370 Grant St, Denver, CO 80203