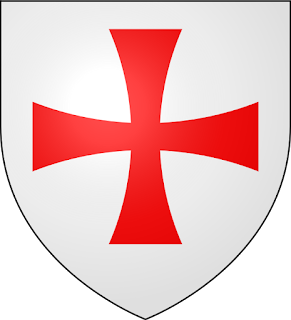 Hugh de Payens was born in East Francia around 1070, the son of Theobald of Blois, a powerful nobleman in the region. The exact date and location is not known but is thought to be in a village known as Payens near Troyes south of Champagne or in the Burgundy region. The family lost much of its prestige when the father conspired against King Henry I of France and was defeated in 1044. This defeat forced the family to relinquish lands and flee to the Champagne region (northeastern France).

There are variations in his name depending on the language in which it is written: Hugues de Payens or Payns in French sources, Hugo de Peans, Hugo de Paganis in Late Latin, and Ugo de' Pagani in Italian sources. While many would see the name "paganis" and would assume the modern meaning of pagan, that of "nature worshipers." However, when researching the word "pagan" is Latin for "villager, rustic, or country-dweller" that was later used to indicate a heathen or one who adhered to the old gods after the Christianization of Roman towns and cities. If Hugh was born in a country village, "pagan" would have been an appropriate literal description of his birthplace.

Being the third son and the family losing much of its holdings, Hugh was destined to join a monastery, but as his older brothers died he became the successor to his father. In 1085 he was dubbed as a Knight and is mentioned in a charter as "Lord of Montigny." According to surviving documents, Hugh is said to have served in the court of the Count of Champagne. It was from these documents that the year of his birth is said to have been no later than 1170 as only a legal adult (16-years of age) could bear witness on legal documents. The Count of Champagne would have been a powerful ally to have as it is said that he was several times richer than the King of France and one of the kingdom's main feudalists. It is not known when he was married, but from extant documents, Hugh was married to a woman by the name of Elizabeth of Chappes (France) and had at least one child together named Thibaud, who would become abbot of Abbaye Sainte-Colombe de Saint-Denis-lès-Sens (southeast of Paris).

As there are no records to prove one way or the other, it is impossible to say whether or not Hugh de Payens took part in the First Crusade. What is known is Hugh de Payens was with the Count of Champagne during a pilgrimage to Jerusalem in 1104. In 1105, Hugh de Payens returned to France, but returned to the Holy Land in 1114. He, along with a contigency of knights, entered the service of the Holy Sepulchre Canon to defend and protect pilgrims traveling to Jerusalem.

They first built the Tower of Destroit along the road from Haifa to Caesarea (northwest of Jerusalem along the coast). The most common belief is that in 1118 Hugh de Payens along with 9 knights founded the Poor Knights of Christ and the Temple of Solomon, also known as the Knights Templar. Michael the Syrian, Patriarch of Antioch, was another Templar historian and according to him, Hugh de Payens had 30-knights with him when the order was established. Baldwin II, the King of Jerusalem, gave the knights the Stables of Solomon as their residence as well as some villages. At the Council of Nablus in 1120, Warmund, the Patriarch of Jerusalem, donated some land to the Knights Templar.

Some legends surrounding the Templars seem to want to perpetuate the mysterious nature of the order and claim that the Knights Templar excavated a sacred treasure from the ruins of Solomon's Temple which prompted them to go to Rome in 1127 and which resulted in Papal recognition. A more logical reason for their travel west was that Hugh de Payens was sent by Baldwin II, King of Jerusalem, to gather more troops as the Latin Kingdom was losing territory to their Islamic opponents. During his travels through Europe, Hugh de Payens helped establish the Templar order in England and Scotland. They would have also been a famous and popular order when the Count of Champagne gave up his title, lands, and family to join the Knights Templar and serve under his former vassal.

Under the governance of Hugh de Payens, the Rule of the Order was written by St. Bernard of Clairvaux, nephew of André de Montbard, and confirmed at the Council of Troyes in 1129 by Pope Honorius II. After this Council, Hugh de Payens returned to the Holy Land with new knights to help bolster the Templar order.

Hugh de Payens died on May 24, 1136, in the Holy Land. Some argue that he died in 1139 after the Templars received Papal support and recognition by Pope Innocent II. Regardless of the exact date, he would have been in his 60s which was considered old age at the time and was the most likely culprit to his death. Hugh de Payens led the Templars for 18-years; tied with Guillaume de Beaujeu for time served and only second to Jacques DeMolay who served for 22-years. He left a legacy a strong foundation for the Templar order that would grow into a international military and financial powerhouse. He was succeeded as Grand Master by Robert de Craon.