Officers of a Commandery of Knights Templar 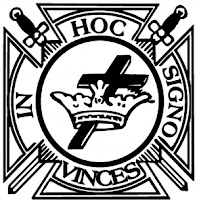 Templar Masonry, or Chivalric Masonry, is the final body of the American York Rite and consists of three orders: Illustrious Order of the Red Cross, Order of Malta, and Order of the Temple (or Knights Templar). The basic organizational unit for the Knights Templar is known as the Commandery and is composed of the following offijcers: Eminent Commandery, Generalissimo, Captain General, Senior Warden, Junior Warden, Treasurer, Recorder, Prelate, Standard Bearer, Sword Bearer, Warder, and Sentinel. As I've discussed them in previous articles, I will not be talking about the Treasurer or Recorder (Secretary).

The Eminent Commander presides over a Commandery of Knights Templar in the US, but in places like England the presiding officer is known as Preceptor (and presides over a Preceptory). The rank of Commander is a commonly used military rank, but in the medieval Templar order, Commanders were knights or sergeants in charge of local commanderies. This officer carries the honorary title of Eminent which is rooted in the Latin word "eminentem" meaning "standing out, projecting, prominent, or high." The word Commander comes from the Old English "comandeor" which stems from the Latin "comandare" meaning "to order, to command, or enjoin" This officer is equivalent to the Worshipful Master of a Blue Lodge. The jewel of the Eminent Commander is a passion cross surmounted by rays of light.

The second-in-command is the Generalissimo who sits on the right of the Eminent Commmandery. He is charged to assist the Commander in the dispatch of his duties and, in his absence, to preside over the Commandery as well as introducing the Grand Commander and his staff when they visit. Generalissimo comes from Italian "generale" and the suffix -issimo, itself from the Latin -issimus, meaning "utmost, to the highest grade". This officer is comparable to the Senior Warden of a Lodge. In medieval Knights Templar, this officer would be equivalent to the Seneschal. The jewel of the Generalissimo is a Square surmounted by a Paschal Lamb. The square reminding us of the lesson of morality from the Blue Lodge and the lamb representing the Christian nature of the order.

The third dais officer of the Commandery is the Captain General and sits to the left of the Eminent Commander. He ensures the Commandery is prepared for the reception of the Commander, and essentially executes a majority of all commands whether communicated through the Generalissimo or from the Eminent Commander directly. The rank of Captain General has been and is still used to denote a senior ranking officer or head of state in some situations. The word "Captain" comes from is rooted in the Late Latin "capitaneus" meaning chief. The word "General" comes from the Latin "generalis" meaning "relating to all, of a whole class, or generic" and which was used to denote a commanding officer starting in the 14th century. This officer is equivalent to the Junior Warden in the Blue Lodge. In medieval Knights Templar, this officer would be equivalent to the Marshall. The jewel of the Captain General is a Level surmounted by a Cock (rooster).

The next officer is the Senior Warden who is more closely aligned with the Senior Deacon of the Lodge as he is in charge of conducting candidates through a part of the Order of the Temple. This officer sits on the southern side of the Commandery known as the "Southwest angle of the Triangle". The word "Senior" comes from the Latin "seniorem" meaning "older." The word "Warden" comes from the Proto-Germanic word "wardon" meaning to "to watch or guard." The jewel of the Senior Warden is the a hollow square with an arm inside holding the Sword of Justice.

The final elected officer is the Junior Warden. This officer is comparable to the Marshall with some duties of the Senior Deacon of the Blue Lodge. Like the Senior Warden, he also conducts candidates during a portion of the initiation and is in charge of the Chamber of Reflection. This officer is stationed at the "Northwest angle of the Triangle." The word "junior" comes from the Latin word "iunior" meaning "young." The jewel of the Junior Warden is the Eagle with a flaming sword in his talons.

The senior appointed officer is the Prelate and whose duties correspond to the Chaplain of the Blue Lodge; there is one difference between the two as the Prelate officiates over the Obligations taken by candidates of the order. A Prelate is traditionally a high ranking member of the clergy and the word is derived from the Latin word 'prelatus' referring to a clergyman of "high rank or of preference over others." In the medieval order, one of the most important positions within a Templar Commandery was that of the Chaplain. This man had many important jobs, not ecclesiastical, but also secular in many ways. He was an internal priest for the Order. He had the power to hear confessions and to give absolution for sins; Templars were forbidden to give confession to anyone other than a cleric in the Templar Order without Papal approval. These clerics were not answerable to local clerics or bishops, but only to the Pope. The Prelate sits in front of and to the right of the Generalissimo. The jewel of the Prelate is the triple triangle with a red passion cross in the center of each triangle.

Sitting in the West of the Commandery, the Standard Bearer guards the banners of the Templar order. This officer corresponds in duties with the Marshall of the Blue Lodge. Historically the duties of the Standard Bearer included being the paymaster and ensuring the equipment (to include the horses) was kept in working order. It should be noted that although he was referred to as the Standard Bearer he never carried the banner, but led the procession which carried and protected it. The word "standard" comes from the Old French word "estandart" meaning "military banner." Some theorize it comes from a Frankish word meaning "stand fast or firm" which would make sense because as long as the Beauceant remained up, the medieval templars would not stop fighting during a battle. The word "bearer" comes from Old English word "berere" meaining "one who carries." The jewel of this officer is a plumb surmounted by the banner of the Order.

Sitting to the right of the Standard Bearer is the Sword Bearer. This officer is charged with protecting the Standard Bearer as well as leading the detail to present the flag for the Pledge. He has duties corresponding to the Junior Steward of the Lodge. The word "sword" comes from the Old High German "swertha" meaning "cutting weapon." The jewel of this officer is the crossed swords within a triangle.

Sitting to the left of the Standard Bearer is the Warder. This officer corresponds to the Junior Deacon of the Blue Lodge as he attends to alarms at the doors to the Asylum and ensures the Commandery is duly guarded as well as announces the approach and departure of the Eminent Commander. The word "Warder", like Warden, comes from the Proto-Germanic word "wardon" meaning to "to watch or guard." The jewel of the Warder is a hollow square with trumpet and crossed swords within it.

The final appointed officer of the Commandery is called the Sentinel and whose duties correspond with that of the Tyler in the Blue Lodge. The Sentinel guards the Commander from without the door to ensure the Sir Knights are not caught or taken by surprise by those wishing to cause harm or those who are not entitled to be there. The Sentinel is one who stands guard over some kind of structure, whether it be an installation, a gate, or a passage. It is there job to prevent intrusion by enemy or those unauthorized. The word Sentinel stems from the Latin word "sentire" meaning "to watch or perceive by the senses." The jewel of this officer is a hollow square with a sword contained within it.