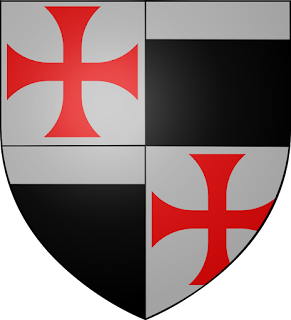 The seventh Grand Master of the Knights Templar was Phillipe de Milly, also known as Philip of Nablus, and who mysteriously resigned around 1171. He is said to have been a gifted linguist, knowing French, Latin, Arabic and Armenian.

Phillipe was born around 1120 AD in the Holy Land to Guy de Milly, a Baron in the Kingdom of Jerusalem. Phillipe inherited his father's estates around Nablus (30-miles north of Jerusalem) and married a woman named Isabella le Bouteiller. They would go on to have a son (who died young) and two daughters named Helena and Stephanie. Helena would go onto marry Walter III of Brisebarre, the Lord of Beirut. Stephanie is said to have married Reynald de Châtillon after his release from the dungeons of Nur ed-Din and go on to be the Lord of Kerak.

He was in attendance at a council in Acre in 1148 where he spoke against attacking Damascus. He along with other native Barons were overruled and resulted in the failed attack on Damascus.

He took part in the Siege of Ascalon in 1153. In that same year, he granted land to the Order of Saint Lazarus, also known as the Leper Brothers of Jerusalem, whose primary job was the care of those afflicted by leprosy, but also, being a military order, took part in battles such as the Battle of La Forbie in 1244.

In the Summer of 1161, exchanged his lordship over Nablus for Oultrejordain. Over the next few years, he would strengthen some of the more strategic fortresses such as Kerak. At some point he also made a pilgrimage to the Monastery of Saint Catherine of Alexandria in the Sinai.

In January of 1166, Phillipe joined the Templar order and gave to them some of his castles and land. Some speculate that the death of his wife caused him to give up his lands and titles, and join the Templars. His lands would have passed to his eldest daughter, Helena.

After the death of the Templar Grand Master, Bertrand de Blanchefort, Phillipe was elected as Grand Master in August of 1169. Many believe that King Amalric had campaigned in support of Phillipe so he could gain Templar support for his Egyptian campaign. The relationship between the Templars and the King of the Latin Kingdom of Jerusalem had been damaged during Blanchefort's time.

For unknown reasons Phillipe resigned as Grand Master early in 1171, and was succeeded by Odo de St Amand. He died on April 3, 1171, on his way to Constantinople.