This is the third and final installment of the Mithraic Mysteries. In Part I, I introduced readers to the religion of ancient Rome. In Part II, the Roman Cult of Mithras was discussed. It has taken me over 2-years to complete this series as I was not quite sure what direction I was going to go and how I would deliver something to do it all justice. I have decided that in this final part, I will be comparing the Mithraic Mysteries with Christianity and only briefly mentioning Freemasonry. I will be looking at similarities and correlations between these bodies, but I am in no way binding them to each other because correlation does not necessarily equate to causation and due to the lack of extant records it would be reckless to connect dots without any solid evidence. Most of this article will be fed from information given in Part II, my own observations, and research performed by other learned Brethren.


In comparing these two, I find there are similarities that have caused a great deal of speculation as well as some stark differences. Some have stated that these similarities occur because of a shared cultural world and others have made the claim that Christianity is just a repackaged Mithraic religion. In my own opinion, I agree with the former and not the latter. Clearly, two faiths developing in the same area of the world at the same time are likely to have similar ideas and practices, regardless of their level of interaction. If anything, the two were competitors during the end of the Roman Emperor, as I mentioned in the last paragraph of the introduction of Part 2. Ernest Renan, a French historian, stated that if Christianity had not existed, the Western world would have become Mithraic.
Both Mithras and Christ were said to be born on December 25th, but I see this as a result of being influenced and centered on the Roman Empire where Sol Invictus was celebrated that day. Their births were different though as Christ is God made Flesh through the Immaculate Conception in Mary Theotokos while Mithras is said to have been born from a rock. Both were introduced to the world through Roman conquest, but Mithras is said to have existed long before while Christ had direct interaction with the Roman Empire. They differ as well in that Christianity is very public while the Mithraic Mysteries had no public face; Christianity is very inclusive while Mithraism is very exclusive. There are some who claim that Mithras and Christ both had 12 followers and were both resurrected, but there is no evidence to support these beliefs. Most of what we know about Mithraism is supposition from studying art and extant Mithraeum around Europe. Much about Mithraism is unknown to us because of the destruction that followed the Roman Empire's conversion to Christianity as well as the overall secrecy of the organization. While some supposed similarities have come about due to the lack of extant records, some theorists use this as a way to justify their rapid crusade against the Christian faith and their attempts to discredit it in the eyes of the world.

"The theory that modern Freemasonry is in some sense a direct descendant from the ancient Mysteries has held a peculiar attraction for Masonic writers this long time, and the end is not yet, for the world is rife with men who argue about the matter up and down endless pages of print."Brother H. L. Haywood

It has been long debated about the connection between Freemasonry and ancient mystery religions. I'm not going to list them all out, but there are a number of similarities between them, but from my own research, these similarities seem to be shallow and not profound or significant. This is my own opinion, but invite anyone, Mason or not, to read back through the previous parts of this series.

Freemasonry has a correlation with ancient mystery religions such as the Mithraic Mysteries, but I believe that man is a social creature and that initiatic, ritualistic traditions are a sociological form. I heard a great analogy comparing initiatic traditions to car companies: "A ford focus is a car, but so is a Honda Civic. So is a Chevy Malibu. None of them look much like an old Model T, but they're all cars, maybe with differences, etc. Say a new car company starts up today, that doesn't make them a direct descendant of cars in ol' Fords day."

It is interesting to note that recently on Twitter I saw the emergence of a Masonic concordant body that calls itself the "Mysteries of Mithras." As there wasn't much information out there I contacted the order and the Pater Patrum (head of the order) sent me some information. According to him:


The Mysteries of Mithras is an independent Masonic Order which is inspired by and uses the allegory of the lost and ancient Mysteries of the previously influential Roman Cult of the same name. We are open to all Master Masons who are a member in good standing and governed by or recognized by the United Grand Lodge of England (UGLE).

However, the Mysteries of Mithras is not a historical re-enactment, or a religious order and there is no requirement for any specific belief for membership and our ceremonies are compatible with all our member's personal faiths. Neither do we claim to have direct lineal descent from the original mystery cult of ancient Rome. Instead, we take inspiration from and base our allegorical Grades of the Order on the teachings and symbolism of the Mysteries of Mithras.

Our Order’s objective is to bring together Brethren with an inquisitive and philosophical view on Freemasonry, who wish to learn more about themselves and the hidden Mysteries of Mithras. We invite and encourage all aspiring aspirants who are seeking to endeavor to make a daily advancement in Masonic knowledge to knock at the door of our Mysteries and inquire into our anciently inspired rituals. 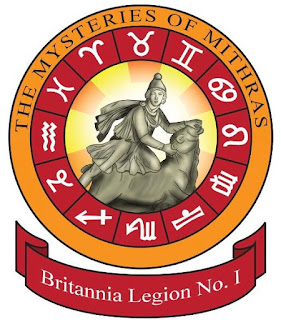 The basic organizational unit is known as a Legion which seems appropriate given the history of the original Mithraic Mysteries. This order is composed of seven grades, or trials, named like those of its symbolic progenitor:

The first four grades are known as the “Terrestrial Grades” and grades five to seven are referred to as the “Celestial Grades”. A Pater serves as the presiding officer of a Legion. A member will hold this title and office for a minimum of one year or until a successor is ready to take this trial.

7. The Roman Cult of Mithras. (n.d.). Retrieved from The Tertullian Project: http://www.tertullian.org/rpearse/mithras/display.php?page=main

8. The Seven Grades of Initiation. (n.d.). Retrieved from The Circle of Ancient Iranian Studies: http://www.cais-soas.com/CAIS/Religions/iranian/Mithraism/m_m/pt8.htm

9. Wallace, J. W. (2019, April 19). Is Jesus Simply a Retelling of the Mithras Mythology? Retrieved from Cold Case Christianity: https://coldcasechristianity.com/writings/is-jesus-simply-a-retelling-of-the-mithras-mythology/
Posted by Barry at 8:00:00 AM