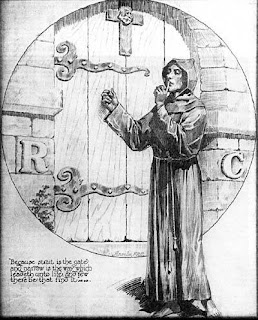 This timescale of a timeline is dependent on the events in the timeline. For example, looking at a timeline of evolution can be over millions of years, whereas a timeline for the September 11th attacks can take place over minutes. This timeline will go from the 14th century to the present day.

According to the Rosicrucian Manifestos, Christian Rosenkreutz was born in 1378 AD in the Germanic states.

At the age of 16, Rosenkreutz begins his pilgrimage which takes him through the Middle East and North Africa. It is on this journey that Rosenkreutz meetings wise men from the regions and learns their ancient knowledge. It is from this journey that some groups such as the Hermetic Order of the Golden Dawn that dates the Rosicrucian philosophy back to 46 AD and to a man named Ormus, an Alexandrian Gnostic Christian.

Rosenkreutz is believed to have returned to Germany from his travels.

The burial chamber of Christian Rosenkreutz is believed to have been built.

Martin Luther publishes his 95 Theses on October 31st in Wittenberg, Saxony, which sparked the Protestant Reformation.

There were many wars fought that are immediately connected with the Reformation:

Luther appears at the Diet before Charles V, emperor of the Holy Roman Empire, to answer charges of heresy. By refusing to recant, he was declared a heretic and formally excommunicated by the Catholic Church by Pope Leo X.

John Dee is born in London. He became a well-known mathematician, astrologer, occultist, Rosicrucian, and adviser to Queen Elizabeth I of England.

The Second Diet of Speyers resulted in the protection of Catholics in Lutheran lands, but didn’t extend protection to Lutherans in Catholic lands 1546 AD.

Rudolf II was born on July 18th in Vienna. He would go on to serve as King of Hungary and Croatia, King of Bohemia, Archduke of Austria, and Holy Roman Emperor from 1576 to 1612. Relevant to this article, his reign was marked by tolerance to Protestantism, alchemy, and Hermeticism.

The Peace of Augsburg is signed which grants toleration to Lutherans within the Holy Roman Empire using the principle of "cuius regio, eius religio" or "Whose region, his religion".


Michael Maier, a German physicist, Rosicrucian, and alchemist, is born in Rendsburg, Germany.

Robert Fludd, the English philosopher, physician, and mystic, is born on January 17, 1574, in Kent, England.

Johann Valentin Andreae is born on August 17th in the Duchy of Württemberg. He is thought to be the author behind the Rosicrucian Manifestos.

Elizabeth Stuart is born in Scotland. Elizabeth was the daughter of King James I and wife to Frederick V of the Palatinate.

Frederick V of the Palatinate is born in the Upper Palatinate (Germany).

Johann Valentin Andreae attends Tubingen University; his grandfather had served as Chancellor some years before. Over the next few years, Andreae gets involved with the Tübingen circle started by Tobias Hess (1568 - 1614). Other members of this group were Christoph Besold, Tobias Adami, Wilhelm Wense, Tomaso Campanella, and Abraham Holzel.

The tomb of Christian Rosenkreutz is said to have been discovered.

The Fama Fraternitatis is published in the Hesse-Kassel region of what is now Germany.

The Confessio Fraternitatis is published in Wilhelm Wessel in the Hesse-Kassel region of Germany.

The Chymical Wedding of Christian Rosenkreutz is published in Strasbourg (Germany). Many believe these Rosicrucian Manifestos were targeted at the Protestant Princes generally, but specifically to Frederick V of the Palatinate and Elizabeth Stuart who were married in 1613.

Elias Ashmole, an English Rosicrucian and Freemason, is born on May 23rd.

In the "Pia et Utilissima Admonitio de Fratribus Rosae Crucis," Henrichus Neuhusius claims that Rosicrucians have fled to the East due to the political and religious instability.

The Mirror of the Wisdom of the Rosicrucians is published by Daniel Mogling under the pseudonym of Theophilus Schweighardt.

Battle of White Mountain occurs on November 8th which results in Protestant defeat. Frederick V is stripped of his titles and land. This was the first major battle of the Thirty Years War which dispersed German refugees all over Europe. One of the displaced was John Amos Comenius, a friend and follower of Andreae, who wandered through Northern Europe and was in England in 1641.

The "Summum Bonum" is published by Robert Fludd.

The Treaty of Westphalia, which ended the Thirty Years War, was signed on October 24th in Münster and Osnabrück. It established the concepts of state sovereignty and self-determination; it stripped the Holy Roman Empire and the Roman Catholic Church of much of its authority in the politics of states.

Thomas Vaughan translates the Fama and Confessio to English.

The President, Council and Fellows of the Royal Society of London for Improving Natural Knowledge, also known as the Royal Society, is founded on November 28th, 1660. Some believe that the Invisible College, mentioned in 17th-century German Rosicrucian pamphlets, was a precursor to the Royal Society.

A group of German mystics immigrated to Pennsylvania which some mark as the date that Rosicrucianism coming to America.

Martinez de Pasqually was born in Grenoble, France, who was a Rosicrucian who was initiated into the Emanuel Swedenborg Rite and founded the Ordre des Chevaliers Macons Elus-Cohen de l'Univers (a precursor to Martinism).

Ramsay's Oration is delivered on March 21, 1737, and declares that Freemasonry came from the Knights of St. John. This Oration is credited with sparking the interest in creating many concordant bodies such as the Scottish Rite which includes the Chapter of Rose Croix (red cross or Rosicrucian).

The accepted date of the beginning of the degrees that would become the Scottish Rite in Paris and Bordeaux.

The "Aureum Vellus" is published which speaks of a "Society of the Golden Rosicrucians" who were inheritors of the Golden Fleece.

The Rite of Strict Observance is believed to have been formed some time in the early 1750s by Karl Gotthelf von Hund in Germany.

The Order of the Golden and Rosy Cross, a German Rosicrucian organization founded by Freemason and alchemist Hermann Fichtuld sometime in the 1750s, but some believe that it was started in 1710. One had to be a Master Mason to join. It conferred nine grades or degrees:

This order's degrees and hierarchy were used in the formation of the Societas Rosicruciana in Anglia and the Hermetic Order of the Golden Dawn. The order spread through the Germanic states, Poland, Hungary, and Russia.

Rosicrucianism was banned by Imperial Decree within Austria.

The Holy Royal Arch Knight Templar Priests (HRAKTP) was thought to have been founded between 1770 and 1780. The Nineteenth degree is called "Knight of Rosae Cross."

In the winter of 1778, at the request of Willermoz, a meeting called the Convent of Gaul was called to order to discuss the reform the Auvergne Province of the Rite of Strict Observance. This body changed its name to the Chevaliers Bienfaisants de la Cité Sainte (Knights Beneficent of the Holy City) or CBCS.

The "Compass of the Wise" was published which contained alchemical and Rosicrucian material.

The Congress of Wilhelmsbad occurs in the Hesse-Kassel region of Germany; the same region where the Fama and Confessio were first publicly published. The Congress resulted in the merger of the Rite of Strict Observance with the CBCS.

"Secret Symbols of the Rosicrucians" appears in Hamburg which contained alchemical illustrations and Rosicrucian teachings.

The first Supreme Council of the Scottish Rite was founded in Charleston, SC, on May 31, 1801.

The Fraternitas Rosae Crucis, also called the Fraternity of the Rosy Cross, was founded in 1858 by Paschal Beverly Randolph, and claims to be the oldest Rosicrucian Order in the US.

The Societas Rosicruciana in Anglia (SRIA) is founded in 1866. It was originally named "Rosicrucian Society of England or Brethren of the Rosy cross."

The Societas Rosicruciana in Scotia (SRIS) is founded.

The Societas Rosicruciana in Canada (SRIC) was officially founded on September 19, 1876, by Col. McLeod Moore. Moore had been advanced to the IX° by Prince Rhodocanakis IX°, Supreme Magus of the Rosicrucian Society for the Kingdom of Greece, in July 1876. The Grecian Society seemed to not last long and died when the Prince died.

The SRIS granted a charter and the Pennsylvania College formed on December 27, 1879.

The SRIS granted a charter to New York College on April 9, 1880.

Massachusetts College was chartered on May 4, 1880.

The High Council of the SRRCA was consecrated on September 21, 1880.

The High Council of the "Rosicrucian Society of England or Brethren of the Rosy cross" changed its name to Societas Rosicrucian in Anglia by William Wynn Westcott, but was not fully used until 1889 when Westcott was Secretary-General of the High Council.

The Hermetic Order of the Golden Dawn was founded in 1888 by William Wynn Westcott, Samuel Liddell, MacGregor Mathers, and William Robert Woodman.

The Societas Rosicruciana in America was founded by Dr. George Winslow Plummer who seceded from the SRICF, dropped the requirement for one to be a Master Mason, and admitted women.

The Rosicrucian Fellowship was founded in 1909 by Max Heindel with the aim of publicly promulgating "the true Philosophy" of the Rosicrucians.

The Ancient Mystical Order Rosae Crucis was established in 1915 in New York City by Harvey Spencer Lewis, and is currently headquartered in San Jose, CA.

The Ancient Order of the Rosicrucians was started in 1989 by Daniel Wagner and is currently headquartered in Vienna, Austria.

The Societas Rosicruciana in Lusitania (SRIL) is founded on October 5th, 2002.

I am going to continue to update this timeline of Rosicrucianism as more information comes to my attention.


5. History of the Rosicrucian Society of England 1867. (n.d.). Retrieved from Societas Rosicruciana in Anglia: https://www.sria.uk.com/about-the-society/history-of-the-rosicrucian-society-of-england-1867/


15. The Rosicrucian Impulse: Magic, Mysticism, and Ritual. (n.d.). Retrieved from Order of the Rose and Cross: http://order.rosy-cross.org/node/86