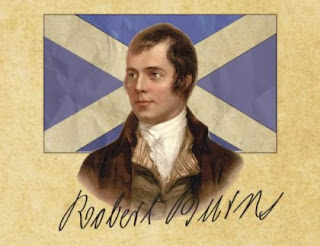 Today we celebrate the memory of the man and Mason, Robert Burns, who was such a passionate Scotsman and poet that, after Queen Victoria and Christopher Columbus, he has more statues dedicated to him around the world than any other non-religious figure. He was born into poverty which he struggled with throughout his life and, due to health issues, he died when he was only 37-years old, but in that time, he left such a mark that he is remembered as the "National Bard", the "Ploughman Poet", and many other names.

Robert Burns was born on January 25, 1759, in Alloway, south of Ayr (southwest Scotland). He was the eldest of the seven children of William Burnes, a tenant farmer, and Agnes Brown (sometimes seen as Broun). Tenant farmers in that time often faced a lose-lose situation because if a farmer was able to improve the land and make a profit, the rent would be increased which would negate his profits and keep him impoverished. Such is the tale with the Burns family because when Robert was 7-years of age, the family had to give up the farm and move to another farm southeast of Alloway. Robert would grow up to be one of his father's main laborers on the farm and many believe that living in such conditions as a child led to his poor health in adulthood.

Even in these conditions, Robert's father saw the value of educating his children. He learned reading, writing, arithmetic, geography, and history from his father, but would later receive a more formal education where he would learn Latin, French, and mathematics. 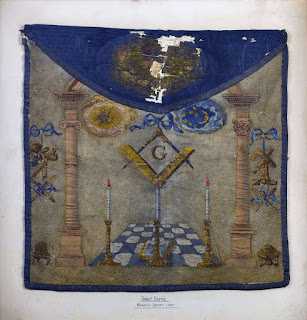 Robert's father, William, would move the family in 1777 to Lochlea, near Tarbolton, where the family lived until William died in 1784. It was in this town that Robert Burns joined Freemasonry. He was initiated as an Entered Apprentice into Lodge St. David on July 4, 1781, at the age of 22. He was passed to the degree of Fellowcraft and raised to the sublime degree of Master Mason on October 1, 1781. This Lodge had some internal disputes and the Lodge split where Robert went to Lodge St. James where he was elected as Deputy Master on July 27, 1784; it was said that the Worshipful Master was more of an honorary position while the Deputy was the one in charge. He was a loyal attendee of his Lodge as his name is recorded dozens of times.

Robert Burns was no stranger to the ladies as he would father several illegitimate children. He had desired the hand of Jean Armour, but her father, a Mason himself, would not allow the marriage even though she is said to have been pregnant with Robert's baby at the time. Robert would meet Mary Campbell who died some months after giving birth to another illegitimate child in 1786. Emotionally and financially this was straining Robert and he faced the prospect of fleeing to Jamaica.

This did not occur though as Robert was approached by Gavin Hamilton who suggested selling his poems. Many who bought subscriptions were his Masonic Brothers and propelled him to celebrity status across the country. This support is what kept the Scottish flavor and cultural roots in his writings. Having grown up in a system that kept his family in perpetual poverty, Burns was constantly frustrated by the political and religious institutions of Scotland. Freemasonry was also an extremely positive influence in Robert's life as it did not reject him based on his social status and when he needed support his Brothers were there. His love of this international brotherhood inspired and is embodied in one of his most famous works "Auld Lang Syne."

While in Edinburgh, he was made an honorary member of multiple Lodges to include Lodge Kilmarnock Kilwinning St. John where he would write a song in honor of the Lodge and its Worshipful Master. Even the Grand Master of Scotland would recognize Burns for his writings and honored him during a toast given at Lodge St. Andrew in Edinburgh in 1787. He is said to have been made a "Poet Laureate" of Lodge Canongate Kilwinning.

Robert Burns was exalted a Companion in the Holy Royal Arch on May 19, 1787, at St. Ebbe's (sometimes spelled St. Abb's) Lodge in Eyemouth (east of Edinburgh along the coast). Some speculate that he was also initiated into the Knights Templar, but I have not seen another source to confirm this claim.

In 1788, he finally married Jean Armour who would bear him several children and would help raise the illegitimate ones. Burns moved to Dumfries in June where he would work as a customs officer. and would join Lodge St. Andrew on St. John's Day. In 1792, he was elected as Senior Warden and this would be the last Masonic office he would hold before he died.

It was in Dumfries that he would write over 100 songs and his masterpiece "Tam O' Shanter". Many of his songs were lyrics adapted to older traditional songs. Burns sought to preserve as much of Scottish folklore and culture as he could. His writings covered topics from romanticism, Scottish patriotism, social struggles, the religious turmoil that still existed in Europe, and Freemasonry.

His life was prematurely cut short when he died on July 21, 1796, at the age of 37, from a rheumatic heart condition. Originally, he was buried in a simple grave, but in 1817 he was moved to a family mausoleum where it has stayed since. He wasn't perfect, but he was an honest and humble man. I believe it was his hardships and transgressions that inspired his works and endeared him to the world.

Today we commemorate the memory of Robert Burns by holding the annual Burns Night, Burns Supper, or Rabbie Burns Day. The format of these dinners is usually as follows:

Such was the character of Robert Burns that friends and admirers held the first "Burns Supper" in 1801 and the tradition has spread around the world. His works have spanned two centuries and work like "Auld Lang Syne" is still sung on New Year's Eve. "A Man’s a Man for a’ That", considered a Masonic anthem, was sung at the opening of the 1999 Scottish Parliament. "Scots Wha Hae" served as an unofficial national anthem for Scotland.

5. Burns and Freemasonry. (n.d.). Retrieved from The Burns Encyclopedia: http://www.robertburns.org/encyclopedia/FreemasonryBurnsand.368.shtml

9. Reno, A. (2017, April 16). Robert Burns: A poet and a Freemason. Retrieved from Tetraktys: https://tetraktys.co.uk/robert-burns-a-poet-and-a-freemason/