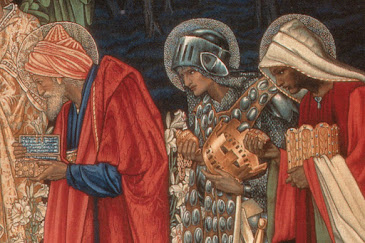 Today is the Epiphany, or the Day of the Three Magi, which marks the end of the Christmas Season as well as commemorates a number of different events in the life of Christ: the revelation to and adoration of the Three Magi, the baptism of Christ by the Baptist, and the miracles at Cana; it is also sometimes known as Theophany meaning "manifestation of God." According to the Gospels of Luke and Matthew, three wise men, or magi, named Melchior, Caspar, and Balthazar, were visited by an angel who declared the Messiah had been born and these three traveled to Bethlehem, following a star in the sky said to rest over where Jesus was born. When they found the baby Jesus they praised his glory and bestowed the gifts of gold, frankincense, and myrrh which were respectively symbolic of His royal standing, His divine birth, and His mortality.

The Book of Matthew is the only of the four gospels to mention the Magi. It doesn't mention an exact number, but it is thought to be three due to the three gifts they bring. This number was favored by Origen, St. Leo the Great, and St. Maximus of Turin. In Eastern Christian traditions, it is believed to be twelve Magi not just three. Other depictions display two magi and, in another, four. These magi were said to be kings in regards to Pslam 72:11, "Yea, all kings shall fall down before him." Some suggest that the visitation of the Magi is a fulfilled prophecy by Balaam, a non-Israelite prophet, mentioned in the Book of Numbers. Biblical scholars believe that Isaiah prophecized the gifts given by the Magi.

It wouldn't be until the sixth century that the names Melchior, Caspar, and Balthazar were attributed to the visiting magi. The "Excerpta Latina Barbari" refers to them as Bithisarea, Melichior, and Gathaspa. From the "Excerpta et Collectanea", written by the English monk Bede, states that the first magus was named Melchior who was an old man with white hair and a long beard, the second one was Caspar who was young and beardless, and the third was a man with a dark complexion and beard named Balthazar. A Syrian manuscript names them Hormizdah, King of Persia, Yazdegerd, King of Saba, and Perozadh, King of Sheba although some traditions list them as kings of Persia (Melchior), Arabia (Balthazar), and India (Caspar); Syriac Christians named them Larvandad, Gushnasaph, and Hormisdas; Ethiopians named them Hor, Karsudan, and Basanater; and Armenians named them as Kagpha, Badadakharida, and Badadilma. The names Melchior, Caspar, and Balthazar stuck due to mosaics of the magi commissioned by the Byzantine Emperor Justinian that included these names.

Melchior comes from the Hebrew words meaning "king of light" or "king of splendor" which would coincide with his gift of gold. It is said that he was a king in Persia, but the territory that he ruled over is not known. The name Caspar is derived from the # word "Gaspar" which is itself stemmed from the Chaldean and Hebrew word "Gizbar" which translates as "treasurer." He is said to be a king from India, but the exact area of his kingdom is not known; some suggest southern India while others speculate farther east towards Thailand and the Malaysian peninsula. Balthazar comes from the Babylonian word "Balat-shar-usur" which translates as "save the life of the king" which alludes to his gift of myrrh as it was used for healing purposes in the Far East. Having a name derived from the Babylonians, it is no surprise that he is said to have been a king in Arabia.

From the Bible, we learn that after the Magi visited the Savior, God sent angels to the Magi to warn them not to return to Herod and they left back to their homes. There are many legends about what happened after. One legend states that St. Thomas, who traveled to India, is said to have baptized and ordained them priests 40-years after their visit to the Christ child. This goes with the stories of a 17th-century Portuguese poet named Luis de Camoes who identified the magi as Indian Brahmins. Another legend is that in 54 AD, the Magi met at Sewa (now Sebaste in Armenia) to celebrate Christmas. The following month they each died: Melchior on January 1, Balthazar on January 6, and Caspar on January 11. How they each died, but tradition holds that they were all martyred which would make sense of the fact that they all died within days of each other. Their relics are said to be housed in Cologne after being taken there by the Holy Roman Emperor Frederick Barbarossa of Germany in 1162 AD.

3. Landau, B. (n.d.). The Magi. Retrieved from Bible Odyssey: https://www.bibleodyssey.org/en/passages/related-articles/magi

4. Longenecker, D. (2018, January 2). Caspar, Balthasar, and Melchior? Where Did That Come From? Retrieved from Standing on my Head: https://dwightlongenecker.com/caspar-balthasar-and-melchior-where-did-that-come-from/